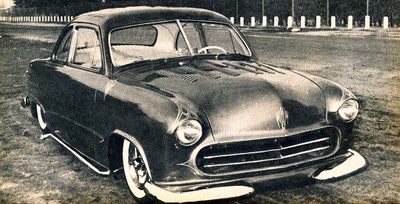 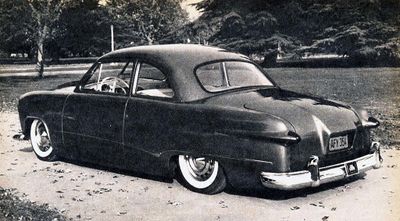 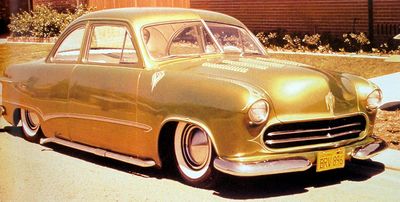 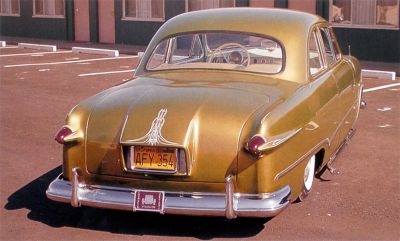 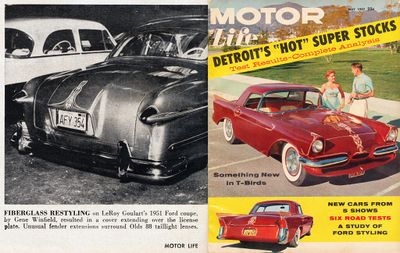 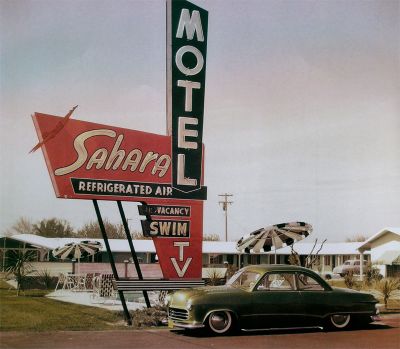 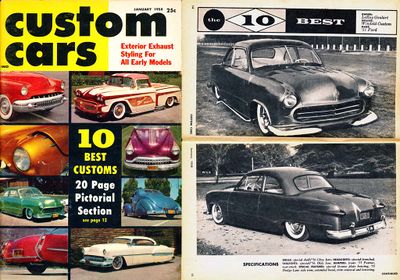 Goulart's Ford was nominated as one of "The 10 Best Customs" in the January 1958 issue of Custom Cars Magazine.[2]

In 1958, LeRoy's coupe was shown at the 9th annual National Roadster Show. It was shown in the Semi Custom Coupe class, and it came fourth in its class.[3]

After a while the car received canted quad headlights, wheelwell coves and a one-piece 1952 Ford windshield.[4]

The final version of the car was painted white pearl with green fogging around the wheel arches. In February of 1961 LeRoy and fellow customizer Lanny Erickson decided to drive the Ford from Modesto‚ California to Lanny's hometown in Minnesota in the winter. LeRoy raised the car before they took off. They slid off an icy road in Rawlins, Wyoming on the way home, and punched a hole in the hydro's trans pan. They left the car at a Chrysler dealership in town because it had an indoor garage. LeRoy planned to come back for the car and loaded his tools and boarded a Greyhound bus. By the time he got back 24 hours later, his mom had 10 calls from people in Rawlins that wanted to buy the car. In addition to the hole in the hydro trans pan, the freezing weather had started the lacquer paint to hairline crack in places, so he sold the car to the shop manager for $950. He painted it in a cheap green enamel and gave it to his son as a graduation gift.[4]

After selling the car, LeRoy lost track of it. The Rodder's Journal did a story on the car many years later. After seeing the story Curt Weber of Cheyenne, Wyoming contacted LeRoy to tell him that the car ended up in his hometown. Weber had seen the car at a local show in 1963 or 1964, entered by Ruben Valerio. Ruben ran a custom shop in Cheyenne. It was sold to Jesse Vasquez who drove it daily for a couple of years.[4]

It ended up with a guy known as "Borancho". He lost it on a tight curve around 1965 or 1966, flipping it into a ravine. Supposedly the smashed roof was cut off, and the interior ended up in a 1955 Ford. The relatively undamaged customized front end was sold to someone with a 1949 - 1951 Ford in Las Cruces. No one has according to the book Lost Hot Rods ever reported seeing a shoebox with that front end in that area.[4]