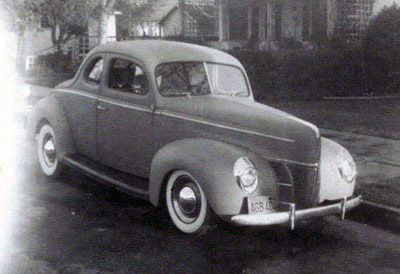 Garret Walther's 1940 Ford Coupe. The coupe was Garret's first car. He bought it in 1955. Installed a huge 1952 Chrysler FirePower Hemi-engine and went racing. 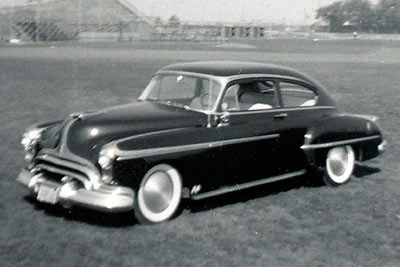 Garret Walther's 1950 Oldsmobile Fastback. Garret bought the car in 1958. About a year he gave it a scallop paint job. He painted the base color, masked off scallops, and had Gene Winfield paint them gold at Winfield's Custom Shop.

Garret Walther of Stockton, California. Garret's first car was a 1940 Ford Coupe that he bought without an engine in 1955. "My brother put a 1952 Chrysler Hemi in it," Garret told Sondre Kvipt of Kustomrama in 2020. Backed by a 1939 Ford transmission, dropped axle, big and little tires, the car was too much for Garret to keep running as the clutch kept going out, "due to a poorly-built adapter plate," he added. "Luckily, a guy had a nice '50 Olds Fastback, and we traded." That was in 1958. "What a great time to be young," he told Sondre. Garret's older brother drove a chopped 1940 Ford convertible, and he had a lot of friends that also were car-crazy, so the Olds was hot-rodded with a 1955 Oldsmobile engine that he bought from a friend. "After a rebuild, I ran it for a short time and the hydro went out. I then found a 1937 LaSalle floor shift trans for $75 (outrageous!) and put it in, along with 4.30 gears in the rear end. Top speed was probably 70, but I got there pretty quickly."[1]

Please get in touch with us at mail@kustomrama.com if you have additional information or photos to share about Garret Walther.