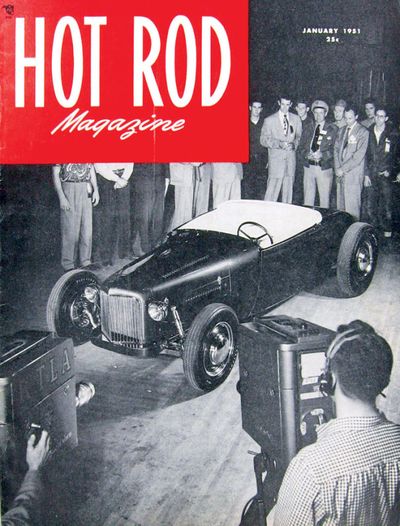 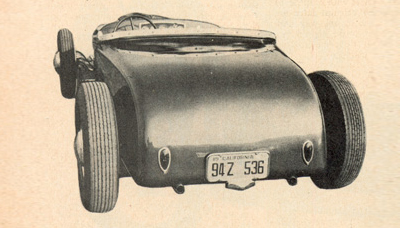 Maroon channeled 1929 Ford Model A Roadster owned by Kenny Smith. The car was primarily built for cruising the streets, but was also outfitted with a tarp and belly pan for competition use. The Roadster was three years in the making, and Kenny did practically all of the work on the car himself. The entire body, including doors, cowl, fender wells and rear deck were filled and smoothed into a sleek one piece unit. The hood was made of aluminum and featured a detachable one-piece top section. The rear of the car was lowered by raising the crossmember above the frame with steel plates. Rear axle was a Model A with 3.78 gears. Brakes mounted on all four wheels were late model Ford hydraulics equipped with truck cylinders. The engine came from a 1936 Ford, and had stock stroke and Mercury bore. The manifold was Evans, and the headers were Meyer. The engine was also hopped up with a full race Winfield cam.

Inside, the dashboard was blended into the cowl, and fitted with a Stewart-Warner boat instrument panel. Steering wheel came from a Crosley Hot Shot. The car was also equipped with a dash mounted emergency brake handle from a 1949 Mercury. The interior was done in ivory plastic leather upholstery. The seat back was removable for easy access to rear deck compartment.

Please get in touch with us at mail@kustomrama.com if you have additional information or photos to share about Kenny Smith's 1929 Ford.