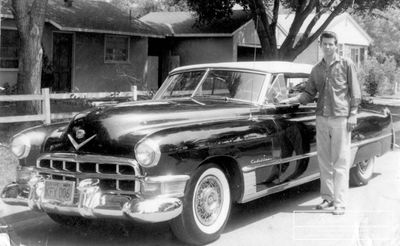 A photo of Eric next to his first car, a 1949 Cadillac Convertible. Photo courtesy of Eric Seltzer. 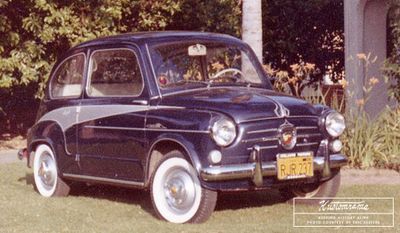 Eric's second car was a 1959 Fiat 600 with an Abarth engine. The car was dressed up with a Von Dutch paint job and a Tijuana custom upholstery. Photo courtesy of Eric Seltzer.

Eric Seltzer of Sparks, Nevada. Eric's first car was a 1949 Cadillac Convertible that he bought when he was 16 years old in 1959. At the time Eric lived in Sherman Oaks, California. While the Cadillac was stock, his next car was a 1959 Fiat 600 Sedan highly modified with a 750cc Abarth engine, special differential gears, custom dark blue metallic paint with pinstriping by Von Dutch, and a complete custom interior with tuck & roll upholstery, new side panels, and carpeting. Eric had all the upholstery work done in Tijuana, Mexico. "We lived just a block from Tony Nancy's upholstery shop in Sherman Oaks and Von Dutch worked out of there at times," he told Sondre Kvipt of Kustomrama in 2021. At the time, Eric was 78 years old, and he had owned 110 vehicles at last count.[1]

Please get in touch with us at mail@kustomrama.com if you have additional information or photos to share about Eric Seltzer.