From Kustomrama
(Redirected from The Howard Gribble Collection)
Jump to: navigation, search 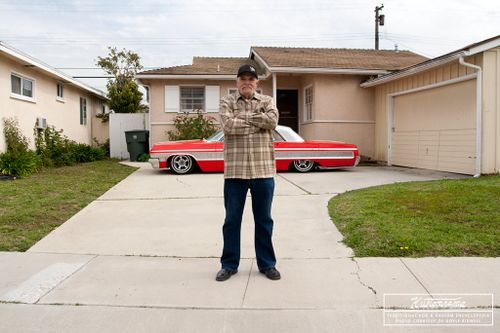 Howard Gribble has been into custom cars since he was ten or eleven years old. Back then, he decided that one day he was gonna have a car with shaved door handles. "It just seemed like such a bold thing to do," Howard told Sondre Kvipt of Kustomrama in 2020. 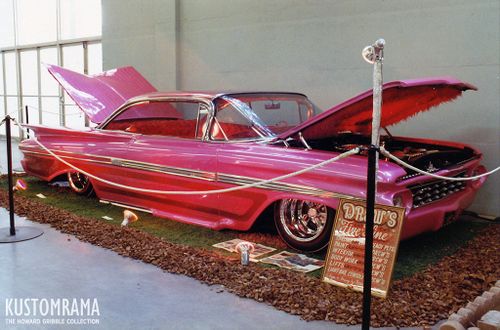 Andrew "Drew" Jackson's 1959 Chevrolet Impala of Long Beach, California. Howard believes this photo was taken in the early 1970s, at the time the car was shown as "Five Line"; "The car was redone several times and I don't know which iteration this is. Lowrider style but with many mild custom modifications. A good looking show car," Howard told Kustomrama. "Five Line" featured paint, interior, bodywork and lifts by Drew. Photo by Howard Gribble. 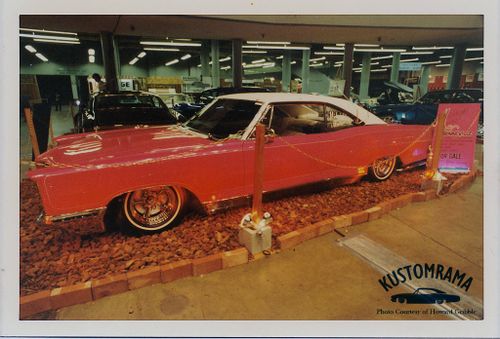 Larry Vaughn's 1966 Pontiac Bonneville at an indoor car show in the late 1960s or early 1970s. "Larry was an early member of the Imperials car club, then, as now, one of the most prestigious lowrider groups. The Imperials recently celebrated 50 years as a club and Larry, his wife and two sons came from their home in Virginia to attend the banquet honoring the 50th anniversary of the club. Larry Vaughn Sr. currently drives a 2014 Chevy Impala on air bags and has recently acquired a '70s Buick Riviera "boat tail" that has custom paint and hydraulic lifts. Tradition runs deep for some of the old timers." Photo by Howard Gribble. 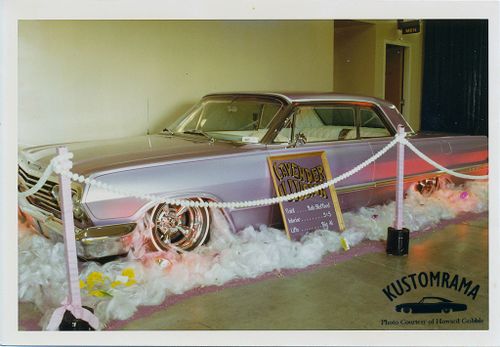 John "Lil John" Giovanni Bertoldi's 1963 Chevrolet Impala. Lil John's Impala was named "Lavender Illusion". The photo has a nice sharp focus, but it is poorly cropped. According to Howard, the finishers back then sometimes were a little sloppy, and they could accidentally cut parts off your photo. Taken in the late 1960s, the car featured a striking lavender paint job by Bob Stafford, a local guy from South Bay; "I never met him, but Roger Squires knew him very well. It is a very fine image with all the late 1960s car show bell and whistles for the car and display. That's why I like it." The "Lavender Illusion" featured lifts by Big Al, and a diamond pleat interior by S & S. Photo by Howard Gribble. 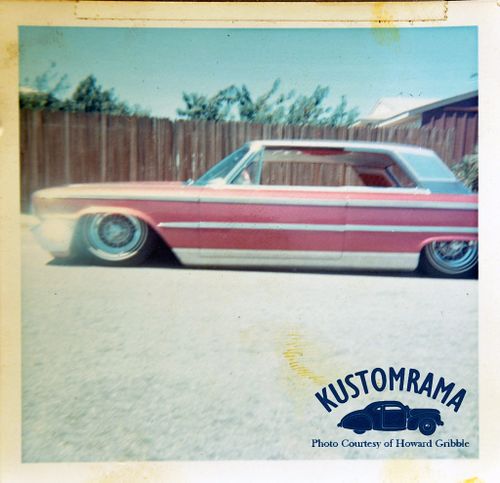 Some of Howard's favorite photos were not taken by himself, like this snapshot of Jim Boyd's 1963 Ford from the camera of Mike Smith. Mike owned and operated a custom wheels and accessories shop called Mr. M's in Gardena, California in the mid to late 1960s. " The car belonged to Jim Boyd, who was two years ahead of me in high school (though I never knew or heard of him then, that I can remember). It was the first car I ever saw that was lifted, though at the time (1965) it was front only and still painted factory red. Later the tail light were deeply tunneled and 1953 Studebaker gravel pans added under the bumpers, along with extended rocker panels to make it look even lower. Then he had Larry Watson spray it as shown in the pics and had the interior done in sculpted rolls and pleats. It also had Buick wire wheels and hydraulics added to the rear. It made a very brief appearance in some documentary film about the youth culture of the day. And I saw it once more at the 1965 Long Beach show in fall of that year. So why are these rather poor photos among my favorites? Well simply because they are the only ones (beside a couple in Larry Watson's collection) that I've seen. I never photographed the car and it never appeared in print, at least not that I'm aware of. It was a great custom for the time and at the very top of my list of cars I'd like to see rediscovered. Or at least dome more pics come to light. Would be great if someone came forward with more info. " Photo by Mike Smith, from the Howard Gribble collection. 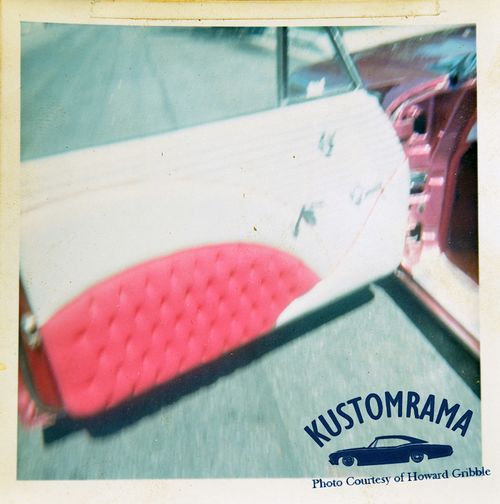 An interior shot of Jim Boyd's 1963 Ford. This photo was also taken by Mike Smith. Photo by Mike Smith, from the Howard Gribble collection. 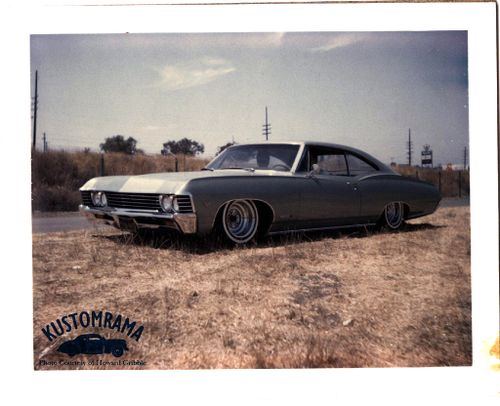 The color Polaroid shot of Howard Gribble's 1967 Chevrolet Impala was made in the summer of 1967 at the Torrance Airport. Howard had just returned from his first ever airplane ride. Within the next month or two Carl Darling would be applying the metal flake fuchsia paint job on the car. Photo by Howard Gribble, from the Howard Gribble collection. 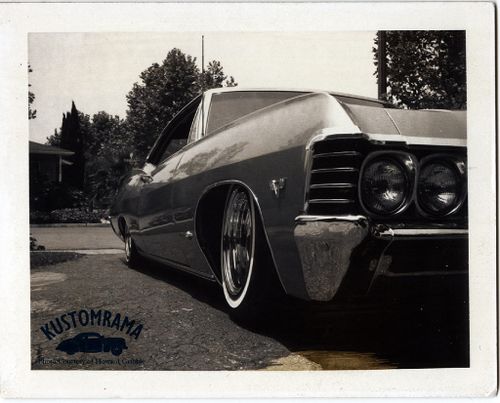 A polaroid photo of Howard Gribble's 1967 Chevrolet Impala. This photo was taken when it was brand new, and it still had the factory paint. Red Pierce had already installed hydraulic lifts on it, and Howard had fit it with deep dished chrome wheels. The flat baldie hub caps had not been installed yet, so Howard believes it had to be taken about June 1967. I'll let Howard take over from here: "I like the low angle detail shot of the front wheel, it gives a feel for what the whole lowrider look was all about. This Polaroid was the first camera I owned. Film was expensive and I was very careful to make each shot count. I think the camera cost $12 or $15, something like that. But it had a surprisingly sharp lens. Focus and exposure control was crude and manual. Yet the results were pretty good and the prints have not faded or changed colors like a lot of the 35mm prints from back in the day." Photo by Howard Gribble, from the Howard Gribble collection. 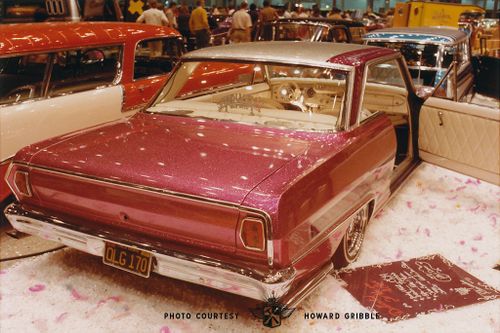 A heavily flaked and customized Chevy 2 at an indoor car show. The car belongs to a member of the Showmasters of Van Nuys car club. Photo from the Howard Gribble collection. 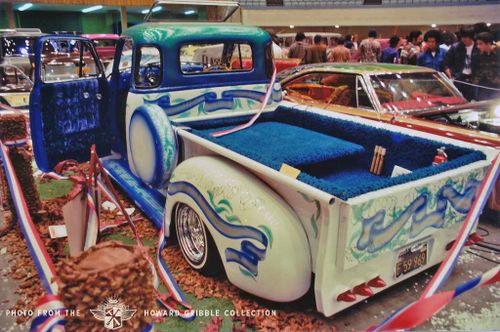 A custom painted GMC Lowrider Pick Up at a So Cal indoor car show in the 1970s featuring Cragars, narrow whites and shag carpets in the bed. Photo from the Howard Gribble collection. 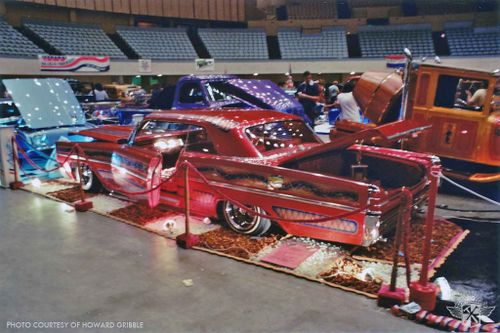 A 1963 Pontiac Catalina at an So Cal indoor car show in the 1970s. Pontiacs were popular to "fix up" according to Howard, though most people preferred the cleaner Grand Prix model. Photo from the Howard Gribble collection 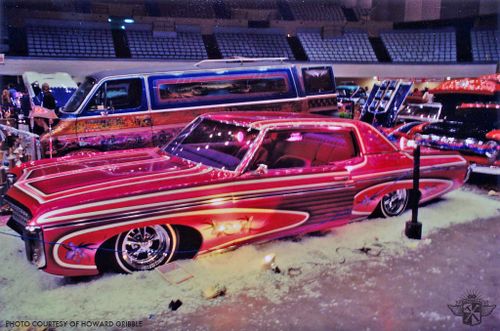 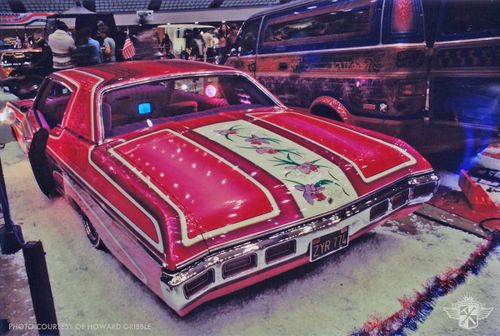 Another photo of the King Orchid at the same indoor show. Photo from the Howard Gribble collection . 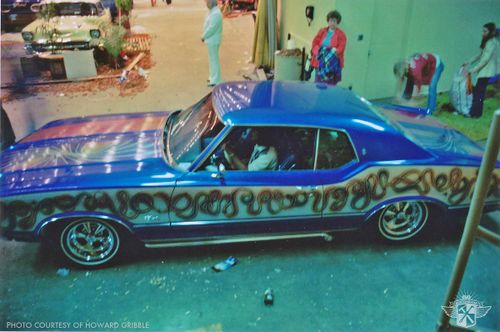 Another 1970s indoor show photo from the archive of Howard. Anyone recognize the car or show? Photo from the Howard Gribble collection 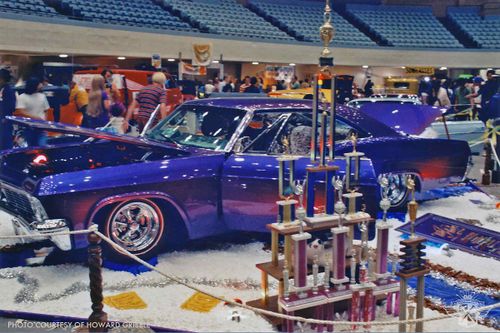 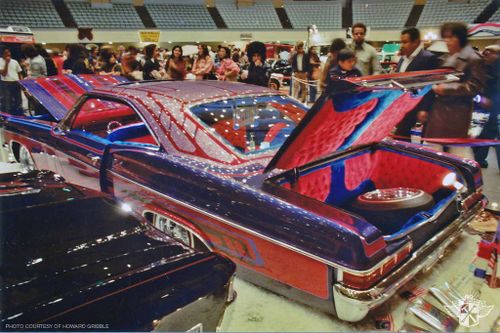 This photo, showing a 1966 Chevrolet Impala at one of the R.G. Canning car shows in Long Beach or at the LA Convention Center was taken by Howard in the 1970s. The car, belonging to a member of the Imperials car club features a tiny welded chain steering wheel, and a wild paint job by an unknown artist.Photo from the Howard Gribble collection

Howard Gribble has been into custom cars since he was ten or eleven years old. Back then, he decided that one day he was gonna have a car with shaved door handles. "It just seemed like such a bold thing to do," Howard told Sondre Kvipt of Kustomrama in 2020. In the 1960s he buys himself a Polaroid camera and starts taking pictures. This sparks another interest, and within a few years, he has decided that he wants to become a photojournalist. Money that he used to spend on cars was now spent on camera housings and lenses. Howard is a quiet, kind, and humble person. He is very passionate and enthusiastic, but he doesn' take up much space in a room. Howard never pursued a career as a photojournalist, and for almost four decades his wonderful photos were only seen by a handful of people. That was until he discovered the Internet and Flickr. Around the same time as Justin Bieber started using YouTube to spread his music, Howard began sharing his photo treasures on Flickr. Both became instant hits and has since then become well known around the world.

Howard was born in Wilmington, North Carolina, but moved with his family to the South Bay area at age 8. While in junior hight school, Howard started to notice customized cars in the area featuring scallop paint jobs, pinstriping and flames. He started drawing pictures of the cars he saw cruising the streets. By the time he was in high school, custom cars dominated his interests, and he started collecting car magazines. At age 15 Howard got his first car, a 1950 Ford sedan that he wanted to give a "George Barris" style, but due to a limited budget the project never really took off. In 1965 Howard bought a 1961 Ford Starliner that he and his friend Carl Darling turned into a customized boulevard cruiser. After the Starliner followed a range of nice custom cars with a lowrider touch.

In the mid 1960s Howard purchased a Polaroid camera to take photos of his different interests. He upgraded to a 35 mm camera, and started attending Southern California car shows on a regular basis. Since there were no magazines covering the Lowriders or the custom car scene, Howard took his camera to the shows and photographed the cars for his own personal enjoyment.[1]

In 2006 Howard signed up for a Flickr account so he could share his photos with the world. He started uploading photos of his various interests, including custom cars and lowriders. So far millions of people all over the world have seen Howard's amazing and continuously growing collection of photos. Howard has contributed some good looking photos and stories to Kustomrama the last year, and now we are expanding the cooperation with this gallery featuring some selected photos from Howard's collection. Some have been published before, and some are making their debut here.

Please get in touch with us at mail@kustomrama.com if you have additional information or photos to share about The Howard Gribble Photo Collection.