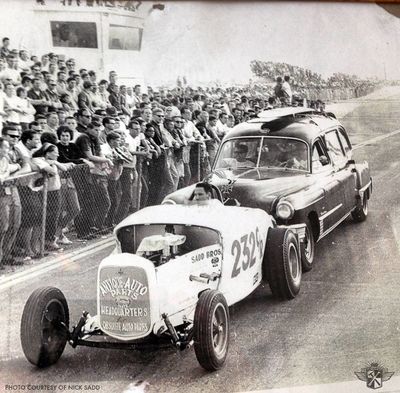 The Sadd Brothers roadster at Pomona in 1964. At the time, the brothers used a Cadillac hearse with a surfboard on the roof to push the roadster. Photo courtesy of Nick Sadd. 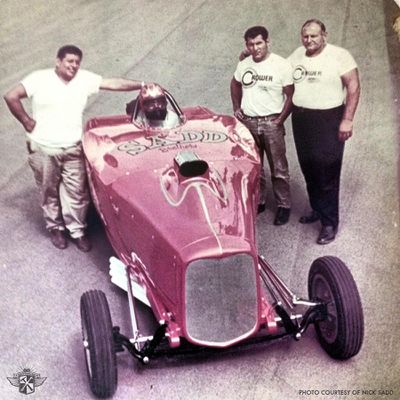 The Sadd Brothers roadster after it had received it's red-orange paint scheme in 1965. Photo courtesy of Nick Sadd. 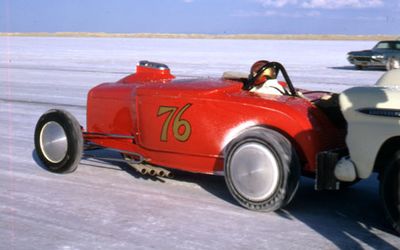 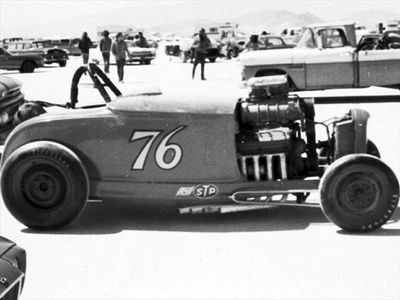 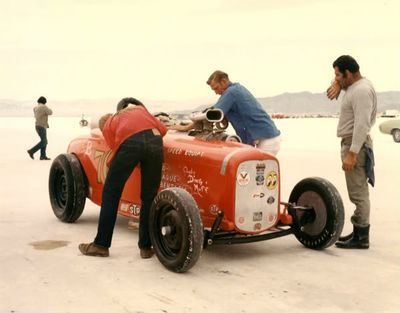 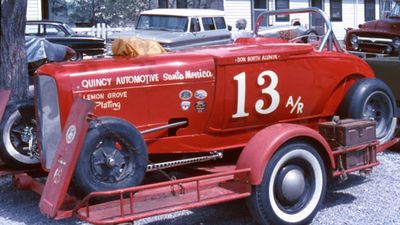 After the accident in 1972, the Willert roadster from San Diego was sacrified to bring the car back to life. Photo by Steve Straw, courtesy of Society of Land Speed Racing Historians. 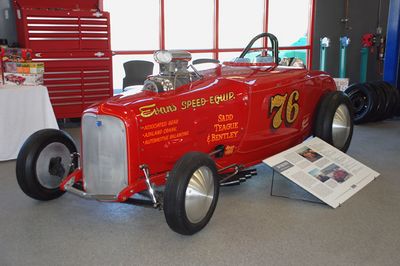 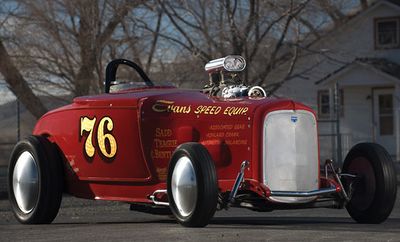 The Sadd, Teague & Bentley roadster as it appeared when it was advertised for sale by RM Auctions.

1929 Ford Model A Roadster originally built by Gene Ohly for Nick and Ernie Sadd in 1956. The car was built on 1932 Ford rails and powered by a fuel injected Ardun flathead. The roadster made its first trip to Bonneville in 1957. In 1963 it turned in a one-way speed of 211 mph.[2] A photo from Pomona in 1964 shows the roadster being pushed by a Cadillac hearse with a surfboard on the roof. The hearse was their pushcar at the time.[3] In 1965 the roadster received a red-orange paint scheme and its famous 76 number. The team also turned from Chevrolet to Mopar hemi power that year. It began a protracted campaign to capture the Fuel Roadster record which would not realize its result until the next decade.[2]

Al Teague first arrived on the Bonneville salt in 1967 as a spectator with George Bentley and George Morris, who were running a 259 cubic inch flathead-powered roadster. He was back again a year later 1968, bringing the Sadd, Teague & Bentley roadster, which was less of a stranger to the salt than Teague.[2]

A change in the SCTA rules in 1970 allowed the team to build a bigger engine than the 300 cubic inch hemi permitted up until then. With the new engine they set an A/Fuel Roadster mark of 220 mph at El Mirage in July, then turned 232 one way and 229 on the return at Bonneville. It was still not the record, but it came close and it was the first hiboy roadster to run over 230 mph on Bonneville.[4] It was done with the 300 cubic inch C/FR engine after the big engine was hurt on the first fast run. A year later, in 1971 Teague clocked 241 mph one way, the first 240+ mph run for a roadster, but the old Cadillac gearbox that had been in the car since it was built in 1956 gave up under the strain of years on the drag strip and record runs on the salt.[2]

The “Sadd, Teague & Bentley” number 76 was completely rebuilt for 1972. In qualifying runs it turned 252 mph. In the first record run an oil line fitting let go, but even after shutting off the blocky roadster was timed at another 252 mph run. Makeshift repairs got them back on the course with a speed of 249 mph for a two-way record average of 250.805 mph, the A/Fuel Roadster record the team had been pursuing for five years. After an engine swap to a 354 cubic inch hemi, the “Sadd, Teague & Bentley” roadster went back onto the course, turning 235 mph in pursuit of the B/FR record. Then, coming back to the pits on the return road in the dark, it collided with a Ford Ranchero coming the other way. Both drivers suffered non-life threatening injuries but the roadster was bent and essentially totally destroyed.[2] After the accident, the Willert roadster from San Diego was sacrificed to bring the Sadd, Teague & Bentley roadster back to life.[5]

A year later in 1973 the “Sadd, Teague & Bentley” roadster was back, completely rebuilt with herculean efforts from the team and some invaluable financial support from additive manufacturer Steed Industries. Powered by a blown 360 cubic inch hemi in search of the B/Fuel Roadster record cut off by the prior year’s accident, it cranked out an amazing 268 mph, then backed it up with a return run which set the B/Fuel Roadster record of 266.043 mph.[2]

In the 1990s Anthony Young restored the car and drove it at El Mirage, breaking an old record.[6]

The car saw action all the way to 2002 when Bentley died.[4] September 26th, 2009 the Sadd, Teague & Bentley roadster was offered for sale as part of the Ralph Whitworth collection at the Icons of Speed & Style Auction in Los Angeles, California. The car changed hands for $121,000 USD.[2]

Please get in touch with us at mail@kustomrama.com if you have additional information or photos to share about Sadd, Teague & Bentley's 1929 Ford.