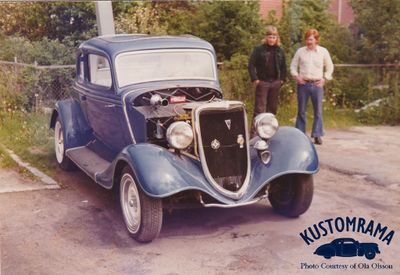 A hot rodded 1934 Ford 5-Window Coupe that Ola came across 10 miles north of Svinesund, Sweden in 1974.The owner is the guy with the dark jacket in the photo. Photo courtesy of Ola Olsson. 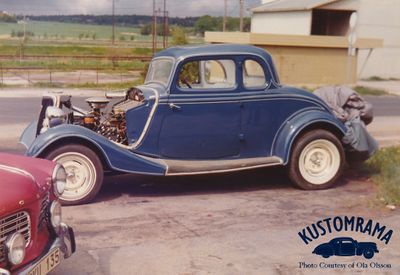 Another photo of the Ford from 1974. Photo courtesy of Ola Olsson. 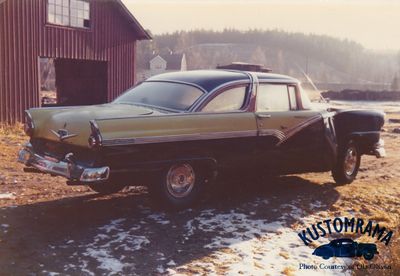 In November of 1974 Ola bought the 1950 Ford from Tor Brestrup of Bjørkelangen, Norway, a couple of months later Tor gave Ola a call to see if he was interested in buying a 1956 Ford Fairlane Victoria. A deal was made, and Tor drove the Ford to Mellerud to hand it over to Ola. He took the train back home again. The Ford was collision damaged, and it came with a freshly bored Chevrolet 327 engine in the trunk. Photo courtesy of Ola Olsson. 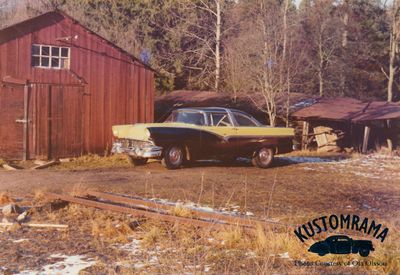 Another photo of the Ford that Ola bought from Tor Brestrup. The car was sold to finance a trip to the US. Photo courtesy of Ola Olsson. 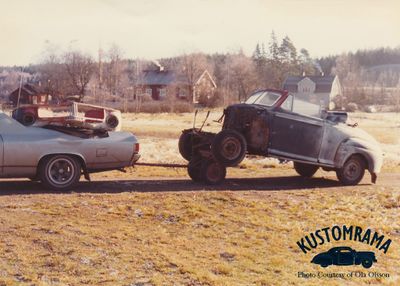 A 1946 Mercury convertible that Ola bought from Eidsvoll, Norway in 1976. Ola bought the car from a Pontiac-enthusiast that ran a Gulf gas-station. Photo courtesy of Ola Olsson. 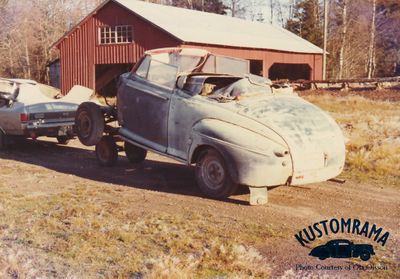 Another photo of the 1946 Mercury that Ola bought from Norway in 1976. Photo courtesy of Ola Olsson. 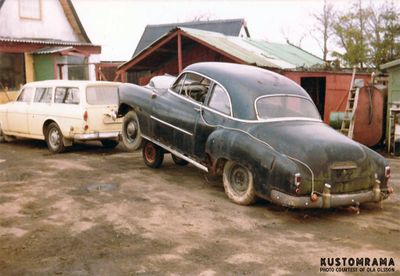 A 1950 Chevrolet that Ola bought from Denmark in 1976. He sold the car to Värnamo, where the new owner chopped the top. Photo courtesy of Ola Olsson.

Ola Olsson of Sweden. In 1964 Ola bought a stock 1936 Ford cabriolet. He took the car to Kanonloppet in Karlskoga, where he met several Norwegian hot rod enthusiasts. Ola remember that most of the Norwegian teenagers drove 1946 - 1948 Fords. One of those cars, a blue convertible, was packed with drunk Norwegians that shouted and made a terrible noise. Everyone were looking at these fellows as you could hear and see them from a long distance. Later on they were stopped by the police as they were so many people in the car. Ola also remembers a Norwegian youngster with a hand-painted red 1934 Ford 5-Window Coupe. The guy in the '34 brought his wife, he was nice, and Ola remember that his car was a right-hand drive. Two years later, on a vacation, Ola came across a red 1934 Ford 5-Window Coupe in a barn in Lillehammer, Norway. The owner wanted 250 NOK for the old car, but Ola had no money, and had to pass the offer.[1]

In 1965 Ola went into the military in Stockholm. In Stockholm, Ola met several Swedish custom pioneers, such as Bo "Gamen" Sandberg. Bo showed Ola around town, and he met several of his friends. Ola was impressed by all the custom cars they had, but he was surprised that there weren't any more hot rods. From his trip, he remembers around 4 or 5 hot rods. Back home, Ola decided to hot rod his '36 Ford, and he began to install a 1955 Buick 322 engine in it. The project stalled when Ola started to study, and he ended up installing a 59AB flathead engine in the car instead.[1]

In 1967 Ola started to visit Norway, looking for old American cars. He remember that at the time there was a major junkyard about 5 miles north of Oslo, where the highway ended. Placed in a valley,it was the biggest junkyard Ola had seen in Norway. It was about 200 x 200 metres filled with old cars. One area of the junkyard hosted Model T and Model A Fords. In 1970 the junkyard was gone. Ola remember that there were very little interest in old American made automobiles in Norway in the 1960s and 1970s. Ola bought several cars from Norway. As late as 1974 he bought a 1946 Ford Coupe for 1500 NOK. The car was running, and he drove it back home to Sweden.[1]

Please get in touch with us at mail@kustomrama.com if you have additional information or photos to share about Ola Olsson.