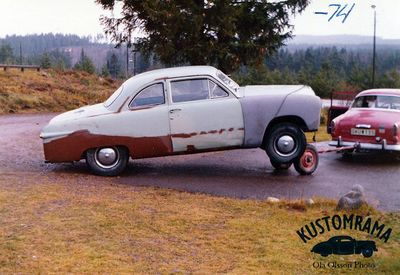 The Ford as it sat when Ola Olsson bought it from Tor Bergskaug in November of 1974. Photo courtesy of Ola Olsson. 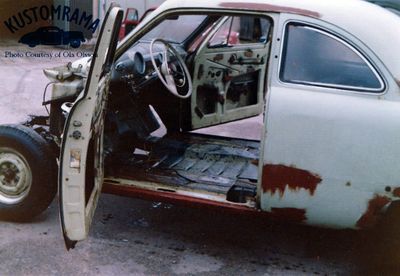 Ola started the build by taking the car apart so he could have it sandblasted. Photo courtesy of Ola Olsson. 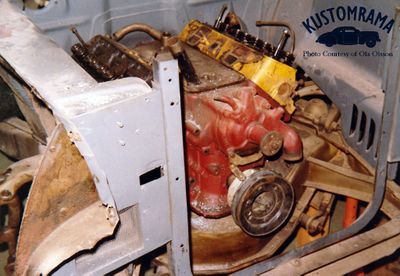 A 292 Ford Y-block engine was rebuilt and fit with a 312 stroker kit from Speed O Motive. Photo courtesy of Ola Olsson. 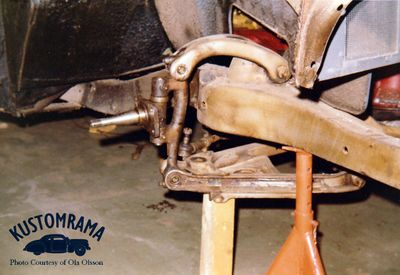 The front of the car was lowered around 3 inches by reversing the spindles. Photo courtesy of Ola Olsson. 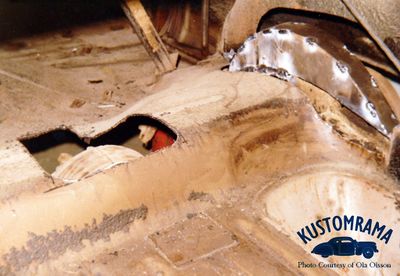 A kickup in the frame was made to lower the car in the back. After lowering the car, Ola had to modify the floor to make room for the rear end as well. As you can see in this photo, the kickup was boxed for extra strength. Photo courtesy of Ola Olsson. 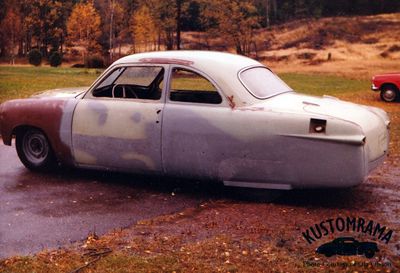 The car has been brought down towards the ground, and the build is taking shape. Photo courtesy of Ola Olsson. 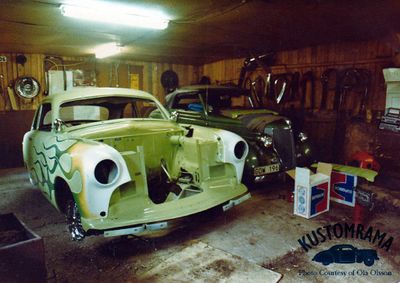 A photo of the Ford as it appeared in the autumn of 1977, after it had received a flame paint job by Ingemar Becker. Photo courtesy of Ola Olsson. 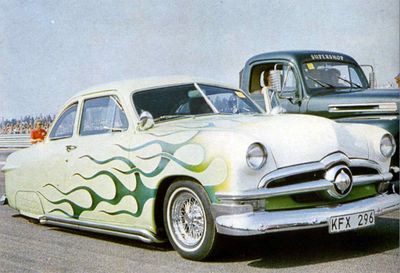 Ola's Ford in the Hot Rod Parade at Mantorp Park in August of 1978. This photo was published in Amcar No. 3 - 1979. Photo by Svein I. Myhre, courtesy of Amcar Magazine. 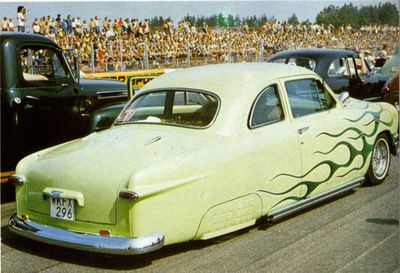 Another photo of Ola's Ford from Amcar No. 3 - 1979. Photo by Svein I. Myhre, courtesy of Amcar Magazine.

Ola's Ford as it sat when it was featured in Colorod Nr 9 1978. Photo by Bo Bertilsson, courtesy of Colorod Magazine. 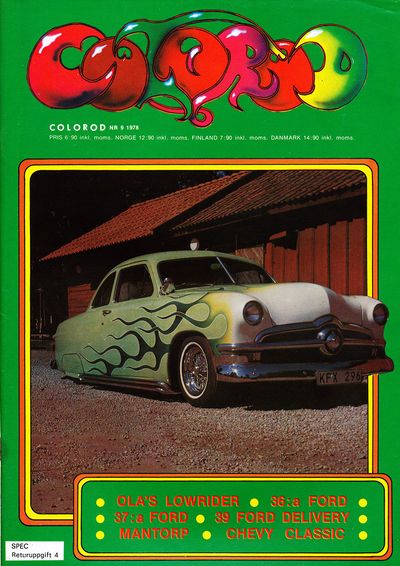 Ola's Lowrider was featured on the cover of Colorod Nr 9 1978. 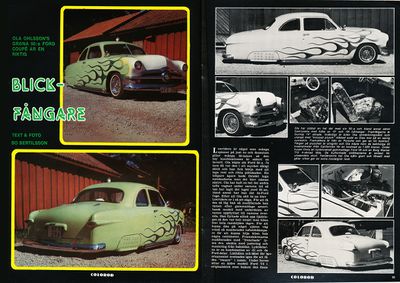 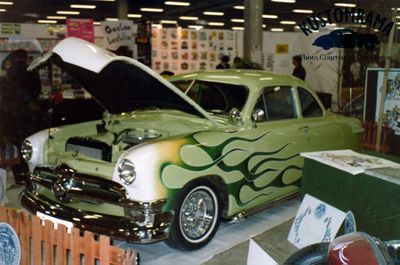 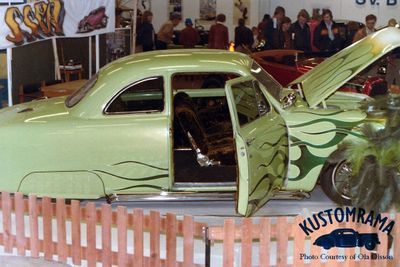 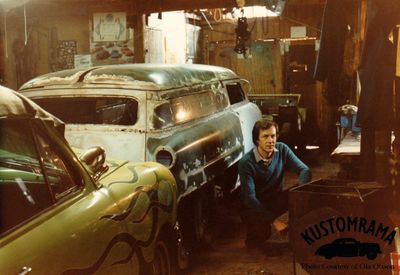 A photo from Ola's garage taken in 1980. At the time, Ola was working on a chopped 1954 Ford sedan delivery. Photo courtesy of Ola Olsson. 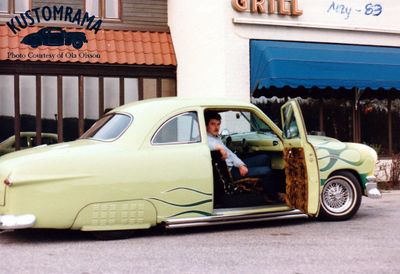 A photo of the Ford taken in May of 1983, before Ola sold it to Staffan Runhag. The photo was taken next to E6, on the way home from a show in Oslo. Photo courtesy of Ola Olsson. 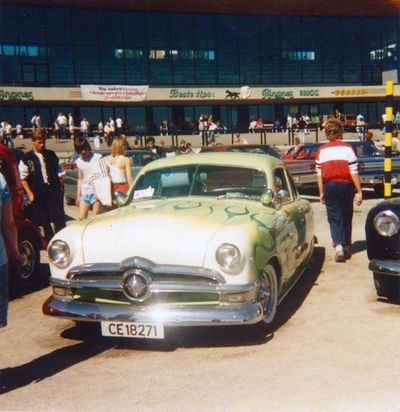 A photo of the Ford taken at Økern in Oslo in the mid 1980s. Photo courtesy of Per Damhaug. 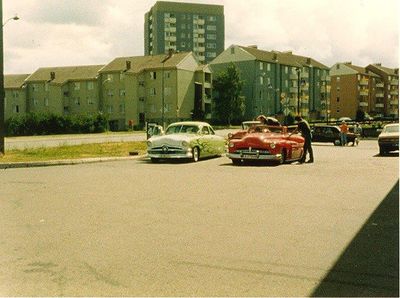 A photo of Ola's old Ford and Levi Lundring's 1950 Mercury taken by the Esso station at Ryen in Oslo in the mid 1980s. Photo courtesy of Per Damhaug. 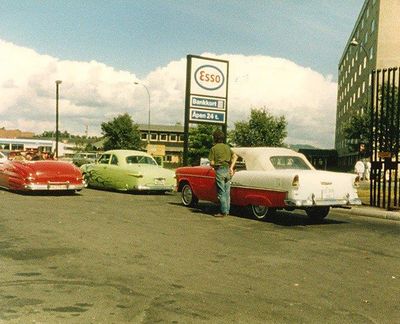 Photo courtesy of Per Damhaug. 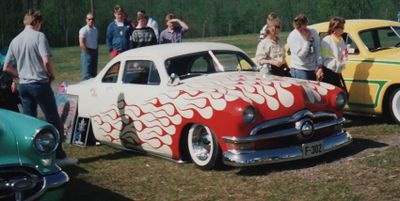 Ottar Fjeldbu bought the Ford in 1988. Ottar and Stig Mjøen chopped the top on the car 2.5 inches. The taillights were also modified, and the deck lid hinges were shaved, before Ottar gave the car a yellow and red flame paint job. This version of the car became very known in Norway, and it appeared in several magazines. The photo was taken at Bilens dag on Hellerudsletta in Oslo in 1989. Photo by Jan Ove Freitag, from Early Ford. 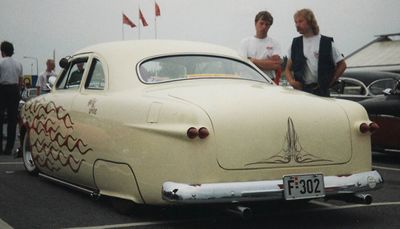 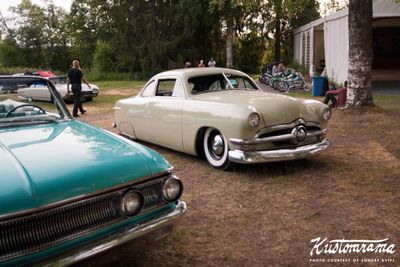 Marius' Ford at the 2018 Coupe Devils Rod & Kustom Bonanza The car had just been given a light green paint job prior to the show, and you could smell the fresh paint as Marius rolled into the show. Photo by Sondre Kvipt - Kustomrama. 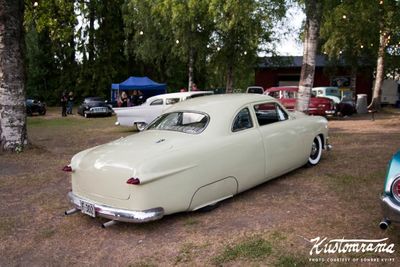 1950 Ford coupe owned and restyled by Ola Olsson of Sweden. Ola's Ford was first registered in Norway in 1951. It was owned by Spektro Film in Oslo. 17 years later, in 1968, Terje Torgerstuen of Lørenskog, Norway bought the car from Ullern Bil in Oslo. Terje ran a body shop in Lillestrøm at the time. He kept on to it for two years, before selling it to Tor Bergskaug of Lillestrøm in 1970. When Tor bought the Ford, it was painted green. Tor replaced the original flathead 6 in the car with a 1953 Ford flathead V-8. In 1973, Tor Brestrup of Bjørkelangen bought the car from Tor Bergskaug. In November of 1974 Tor sold the car to Ola Olsson of Sweden.[1] As so many other Swedish enthusiasts, Ola crossed the border to Norway several times in the 1960s and 1970s to buy project cars. When Ola bought the Ford it was a beaten up, rusted out project. A previous owner had started to repair the rust damages, but the craftsmanship was bad, so Ola had to redo it. The body was stripped for parts and sandblasted before Ola began to repair the rust damages and redo previous repairs. After the rust had been repaired, Ola gave the car a proper stance by kicking up the rear of the frame. Ola wanted to obtain a "Lowrider" look, so 5 1/2 inches lowering blocks were installed. HiJackers ensured that Ola could raise and lower the coupe a couple of inches. Up front, the spindles were reversed, lowering the car around 3 inches. When it came to body modification, the headlights were frenched using 1951 and 1954 Ford headlight rims, before it was shaved for trim and ornamentation. Power came from a 292 Ford Y-block that Ola rebuilt. A 312 stroker kit that Ola had bought from Speed O Motive in California was installed during the rebuild.[2] The engine was connected to a 4-speed Borg Warner T-10 transmission. A jointed driveshaft made from Ford and Volvo parts was made and installed so that Ola didn't have to modify the floors. The stock rear end was kept, but it was mounted using a Panhard-bar. The build was then dressed up featuring homemade louvered fenderskirts, dual side pipes on each side, and dummy spots. The wheels were 14 inch Dunlop wire-wheels with narrow wide stripe tires. Inside, Ola's mother upholstered the interior of the car in olive-green velvet that Ola had bought in California in 1977. 20 square meter of velvet was used for the upholstery job. The front-seats were taken from a Porsche, and a small deep steering wheel enhanced the lowrider-look that Ola wanted to achieve. Once the bodywork was done, Ingemar Becker gave the car a flame paint job. A light green paint with a pearl effect was used as base. The base was then covered with gold-murano for a color-changing effect before Ingemar applied the white, yellow and green flames. The build was completed in 1978, and it passed the Swedish vehicle-inspection in the Summer of 1978. In order to pass the inspection, Ola had to fill the car with 5 people to prove that it retained suspension when it was fully loaded. Once completed, Ola's "Lowrider" landed the cover of Colorod Nr 9 1978. The magazine did also contain a featured story on the car by Bo Bertilsson.[3] Ola attended several shows with the car, and it received a lot of magazine ink and admiration over the next few years.

Shortly after the build was completed, Ola began his next project, a chopped 1954 Ford sedan delivery. By 1983 he was tired of the coupe, and he decided to sell it to Colorod writer Staffan Runhag.[2] After enjoying it for a Summer, Staffan sold the old Ford to Bates Amcar at Harestua, Norway later on the same year. Getting a modified car approved by the vehicle-inspection department in Norway was not an easy task at the time, but since the Ford was originally sold new in Norway, Bates was able to get Norwegian license plates on it. In 1984 a fellow named Brattbakken bought the custom from Bates Amcar. Leif Arild Steensgaard bought the car from Brattbakken December 23, 1985. He kept onto it for three years before he sold it to Ottar Fjeldbu of Årnes in 1988. Ottar and Stig Mjøen chopped the top on the car 2.5 inches. The taillights were also modified, and the deck lid hinges were shaved, before Ottar gave the car a yellow and red flame paint job. This version of the car, known as "Wild Fire", became very known in Norway, and it appeared in several magazines. In 1997 Ottar sold the coupe to Lasse's Bil. Per Damhaug of Sarpsborg, who worked with Ottar at the time, went straight to Lasses's Bil and bought it the same day. When Per bought the car it had been fit with hydraulic lifts from a tractor up front, and it ran hi-jackers in the rear. In 2001 Per sold the old custom to Terje Ekeberg of Fredrikstad. When Terje bought it the paint had started to crack and the chassis was due for a restoration. Terje wanted to give the car a paint job similar to the one Ola Olsson gave it in 1977. Lacking money for a proper paint job, Terje gave the Ford a temporarily flat black paint. A year later he had to sell the car to finance a house. He sold it to Tina Von Sommerfeldt. Tina wanted an unchopped Ford, so she traded it with Jan Olav Ekebergfor a 1949 Ford in 2003. Jan Olav is the brother of Terje Ekeberg.[4] Jan Olav removed the hydraulic lifts on the car and got it running again. In 2008 Terje was able to buy the car from his brother again.[1] It was still flat black, so he decided to upgrade it with a satin black paint job while saving up money for a proper flame paint job similar to the one Ola Olsson gave it.[4] For a while, it was rumored that the body of the Ford had been scrapped as it was in a bad shape. According to the rumors, Ola's old chassis had been fit with a better body.[2]

Later on, Marius Thoner bought the car from Terje and gave it a light green paint job. The light green version of the car made it's debut at the 2018 Coupe Devils Rod & Kustom Bonanza.

Please get in touch with us at mail@kustomrama.com if you have additional information or photos to share about Ola Olsson's 1950 Ford.