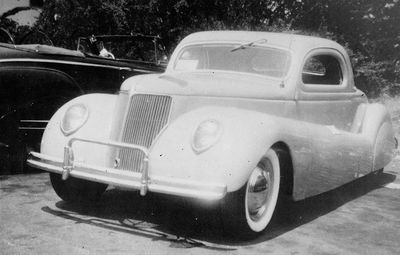 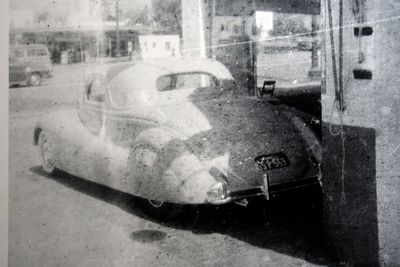 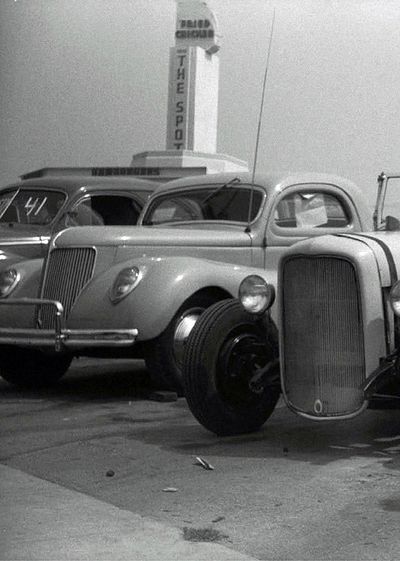 The coupe advertised for sale at the Smith Car Co. used car lot in 1946. Photo by Strother MacMinn published in the book Hot Rods and Custom Cars.[2] 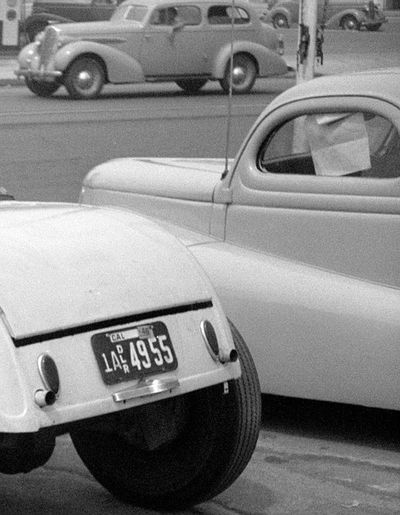 Another photo from the Smith Car Co. used car lot. Photo by Strother MacMinn published in the book Hot Rods and Custom Cars.[3] 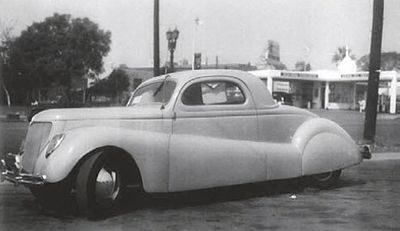 A cut-out version of this photo was published in Dan Post’s Blue Book of Custom Restyling from 1947. This photo is taken at the Smith Car Co. used car lot as you can see on the paper in the window. 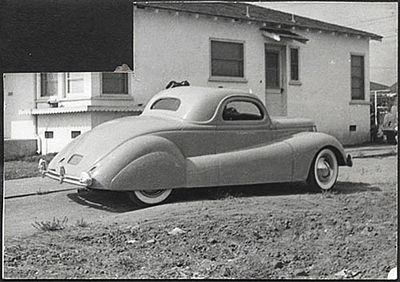 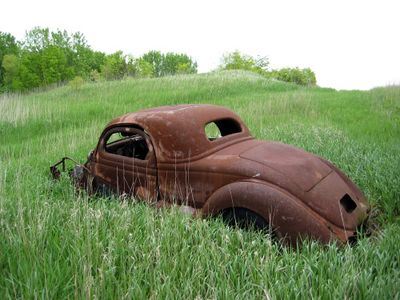 The coupe as it sat in May 2009. After being identified as an old Jimmy Summers creation on the HAMB, the current owner of the coupe received a lot of bids on the car, but refused to accept any of them. Photo by Carl Owens from the HAMB.[5] 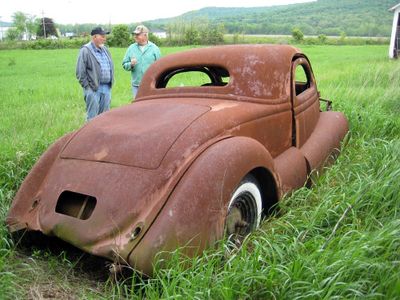 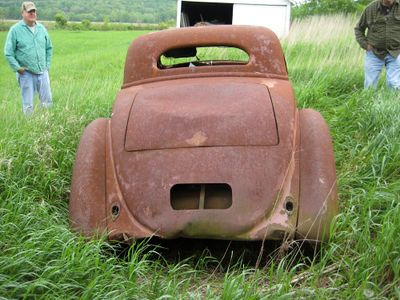 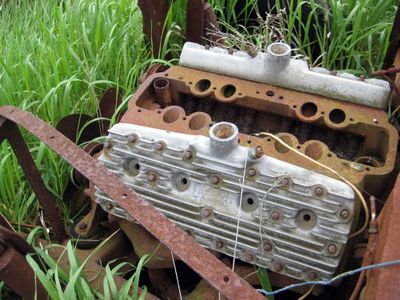 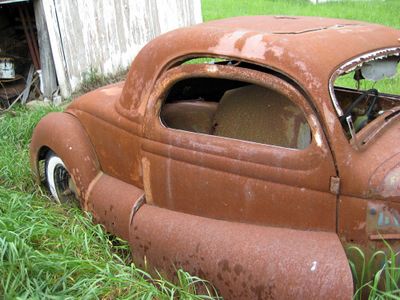 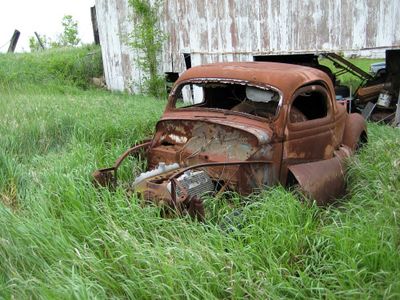 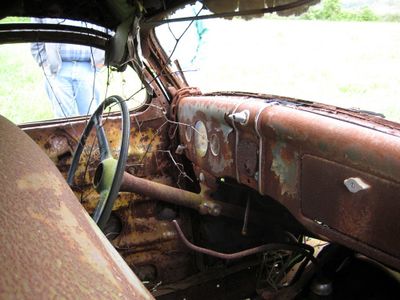 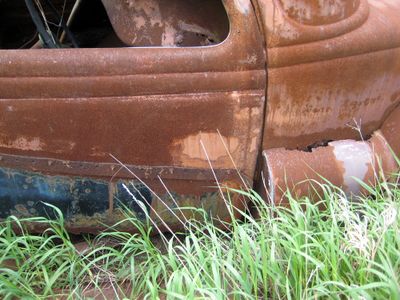 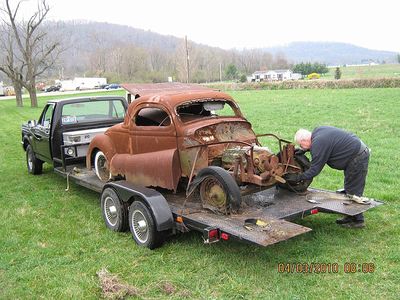 January 2011, Rik Hoving received these photos showing the car being pulled out of the field an into storage by its new owner. The previous owner decided to sell the car after being involved in an accident.[5] 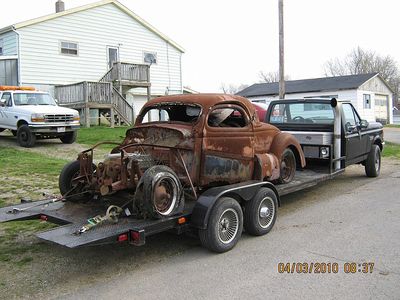 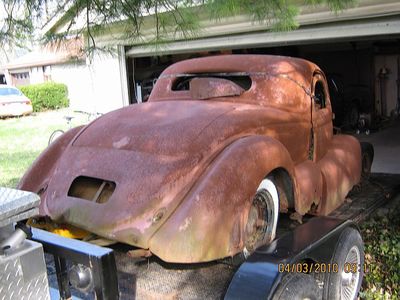 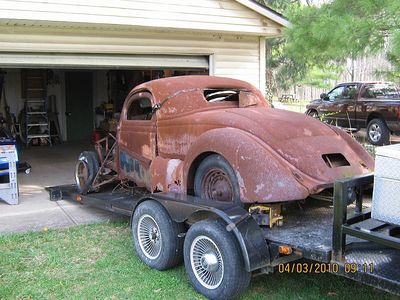 1936 Ford 3-Window Coupe supposedly restyled by Jimmy Summers in the 1940s. It is not known when the coupe was first built or who the original owner was, but the white version of the car can be seen in Dan Post’s Blue Book of Custom Restyling from 1947.[5] The photo was taken at the Smith Car Co. used car lot in 1946. Additional photos from Smith Car Co. were taken by Strother MacMinn and published in the the book Hot Rods and Custom Cars. By then, the coupe had been chopped and channeled. The hood and grille had been sectioned, and the front fenders were fit with 1937 Ford headlights. The front fenders were also reshaped and fit with fadeaway fenders that were scratch built by Jimmy and bolted to the body. The stock bumpers had been replaced with a pair of 1941 Ford bumpers, and the taillights were replaced by a pair of 1939 Ford taillights. The coupe was painted white, and dressed up with fender skirts and single-bar hubcaps. In Goodguys Goodtimes Gazette April 2010, Albert Drake did a story on the coupe. In that story Albert says that Strother MacMinn once told him that Summers built the coupe in 1943 or 1944.[6] In the foreword of the book the Art of the Hot Rod by Ken Gross, Alex Xydias recalls the following info on how he met Jimmy Summers and how he became aware of the art of customizing: " I started my Hot Rod shop right after I got out of the Army Air Corps in 1946. But we never did any customizing there. I became aware of customizing because Jimmy Summers was located right across from Fairfax High School, and I'd go over there and watch him do stuff. At that time there weren't a lot of shops doing this sort of work. Jimmy Summers and George Duvall were two of the best known guys before the war. Jimmy had a guy working for him named Bob Fairman...they called him "Barbells". He built a chopped '36 Ford and ran the front fenders all the way back fadeaway style, like the Buicks of that era. His was the first custom I'd ever seen that did that. He took the door handles off and put a toe opener under the door. What a beatiful car that was. I've never seen pictures of it in any of the magazines. "[7] The way Alex describes Bob's coupe, it sounds a lot like this one, so unless Jimmy built another 1936 Ford coupe with fadeaway fenders, this coupe was probably owned and restyled by Bob Fairman while he worked for Jimmy.

After being discharged from the Korean War in the early 1950s, an Ohio boy named Joe Johnson found the old coupe in a used car lot in California. He bought the coupe and drove it across the country to his hometown of Sparguarsville, Ohio. Don Kretzer remember seeing the coupe parked in front of Joe's house. At the time it was painted metallic bronze, and it still had California plates. Don was just a kid when he first saw it, but he remembers how badly he wanted the car. Joe drove the coupe regularly until the engine blew. After the engine blew, he sold the coupe to a fellow in Greenfield, Ohio. The new owner repaired the engine and drove the car until 1957. In 1957 the car was parked at the fellow's farm where it sat until the year 2000. In 2000 the owner wanted to have the old coupe restored, and he it to a body shop to inquire about restoring it. The shop owner just laughed, so the owner decided to take the coupe to the crusher. Luckily, Don Kretzer persuaded the owner to store it at his place free of charge. The owner agreed, and the car was stored outside Don's place for the next ten years.[6] In 2009 photos of the car was posted on the HAMB showing its current condition. The car was in a bad shape, but still amazingly complete. What might be the original engine with Edmunds heads were still in the car, but the grille and hood were stolen. After being identified as a Jimmy Summers creation the owner received a lot of bids on the car, but refused to accept any of them. The owner was later in an accident, and decided to sell the car. January 2011, Rik Hoving received some photos showing the car being pulled out of the field and into storage by its new owner. [5]

Please get in touch with us at mail@kustomrama.com if you have additional information or photos to share about Fadeaway 1936 Ford by Jimmy Summers.