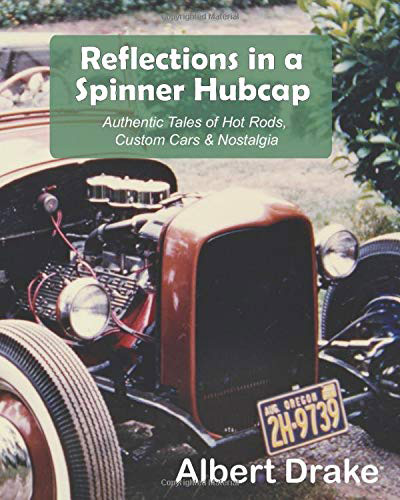 Reflections in a Spinner Hubcap: Authentic Tales of Hot Rods, Custom Cars & Nostalgia. Paperback book by Albert Drake. Published by Flat Out Press August 3, 2020. Check price and availability on this book on Amazon.com.

Albert Drake was born in Portland, Oregon when it was less populous and life had the quality of Norman Rockwell paintings. He was educated in public schools and followed his father‟s footsteps, working for years in service stations, garages, and automotive warehouses. He eventually attended Portland State College, and got his degrees at the University of Oregon. He twice won the Ernest Haycox Prize for fiction. For nearly 30 years he labored in the groves of academe, where he was cited for his outstanding teaching and rose to the rank of Full Professor. He was the first academic to teach a class in science fiction as literature, and for several years he was Director of the Clarion Science Fiction Workshop. He has received numerous academic and creative grants, including two major grants from the National Endowment for the Arts. His fiction, poetry, and prose have been widely published in literary quarterlies and popular magazines, including Redbook, Epoch, North American Review, and The Best American Short Stories. He is currently Professor Emeritus of English.[1]

Please get in touch with us at mail@kustomrama.com if you have additional information or photos to share about Albert Drake.