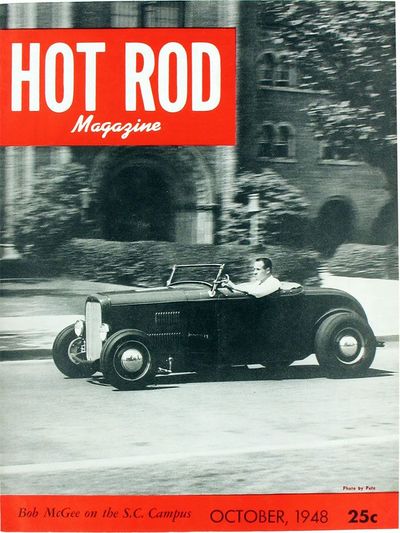 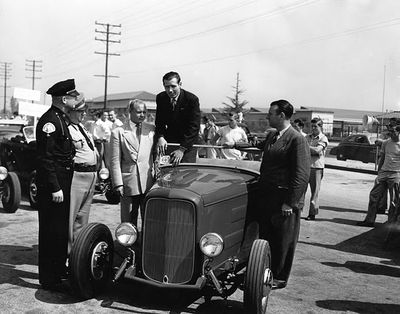 A photo of Bob's roadster the day it received a National Safety Council green cross decal. 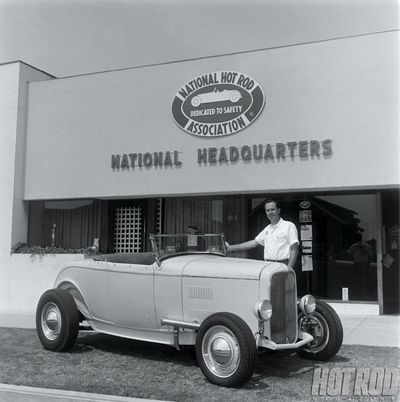 Dick Scritchfield with the roadster June 27, 1957. Dick worked for NHRA and was a cofounder of the L.A. Roadsters. Photo by Eric Rickman, courtesy of Hot Rod Magazine. 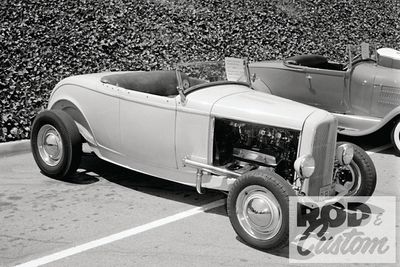 The roadster as it appeared after Dick Scritchfield had given it a Metalflake paint job late in 1960. 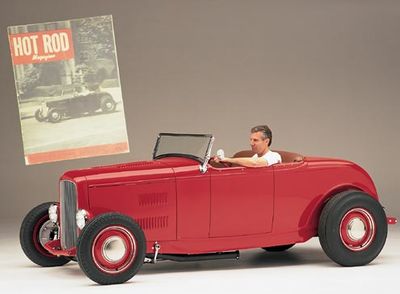 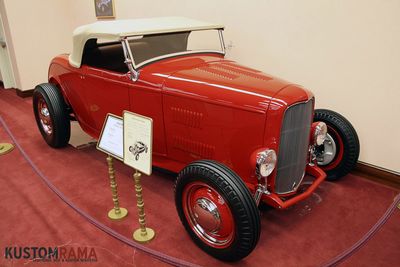 The Bob McGee Roadster in 2008 at the Blackhawk Museum. Photo by Sondre Kvipt. 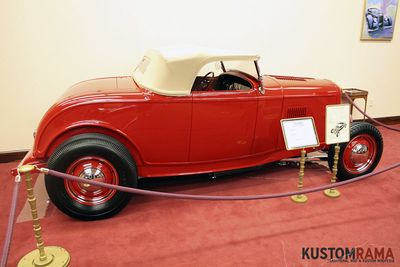 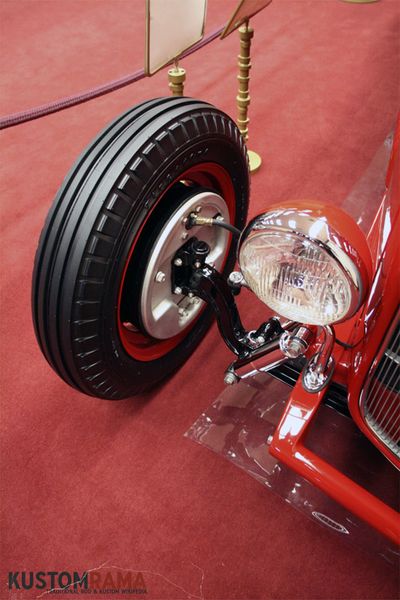 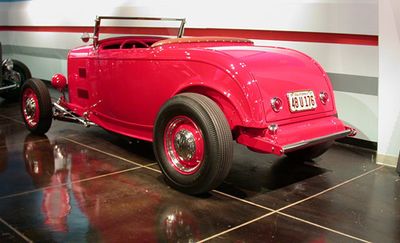 April 12, 2017 the McGee roadster, the Hirohata Merc and the Gypsy Rose were announced as the 16th, 17th and 18th vehicles to be added to the National Historic Vehicle Register in recognition of their significance in American automotive history. All three vehicles were center stage on the National Mall that morning to mark the commemoration and opening ceremony for the third annual Cars at the Capital exhibition. Photo courtesy of Historic vehicle Association. 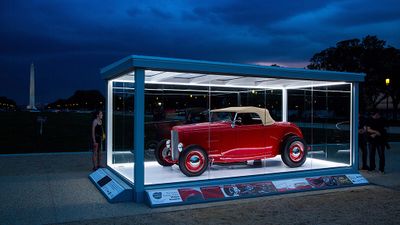 As part of the Cars at the Capital exhibition, the McGee Roadster was showcased in an illuminated glass box in the National Mall from April 20-26, 2017. Photo courtesy of Hot Rod Magazine.

1932 Ford Highboy Roadster owned by Gear Grinders member Bob McGee of Huntington Park, California. Bob bought the roadster in 1940, and it underwent a number of modifications before he went off to the War. While Bob was away he turned the car over to a friend. The friend managed to turn it over.

After returning from the war, Bob started the re-construction of the car in 1947. The build was completed in 1948, and took 4 months. Jimmy Summers and Whitey Clayton, two of the best metal craftsmen og his day, where employed to do the job. Jimmy filled the cowl and hammered out miscellaneous dings and dents.[1] This version of the roadster landed the cover of Hot Rod Magazine October 1948. Modifications included hidden door hinges, and a specially fabricated full-length deck lid by legendary metal man Whitey Clayton of Clayton Metal Shop. Whitey did also create a unique extended dash and a innovative three-piece hood for the roadster. The dash was highlighted with an oversized tachometer that was intentionally reminiscent of the panels in the ill-fated 1935 Miller-Ford Indy cars, and the hood featured an unique latching mechanism.[2] The dashboard was painted Maroon, and it featured a 1940 Ford steering wheel. It did also have a filled radiator shell, 1946 Pontiac taillights, and Mercury hubcaps. Bob's desire was to have a body centerline that was low and parallel with the horizon. To do this, he installed a dropped front axle and reversed the eyes on the front spring. In the rear he kicked the frame up, and reversed the rear spring. All unnecessary holes in the frame were filled, the frame horns were boxed, and a peaked spreader bar was installed. The backing plates were cad-plated, the front shocks, tie rod, pitman arm and drag link were chromed. Power came from a 1934 Ford engine that was, ported, relieved, and bored out to 236 cubic inches. The engine was also equipped with rare 21-stud Federal Mogul bronze heads. The valves were operated by a Bertrand cam. Twin Stromberg 97s on a Burns Intake, and Spalding Zephyr-type ignition were also installed. Zephyr transmission and Ford differential turned the 7.00X16 rear tires. The roadster was converted to hydraulic brakes.

Bob's roadster was the first car to receive a National Safety Council green cross decal. The event was covered by all of the Los Angeles newspapers and Hot Rod Magazine.

Sold to Dick Hirschberg in 1955

Bob's friend sold the roadster to Dick Hirschberg in 1955.

Sold to Dick Scritchfield in 1957

In 1957 Hirschberg traded the car and $800 to Dick Scritchfield for a 1948 Lincoln Continental convertible that Scritchfield had hopped up with a Cadillac OHV engine. Scritchfield replaced the dropped axle on the roadster with one of the last 4 Bell dropped tube axles they had left, and chromed all the non-chromed suspension parts. Later on, he also replaced the drum brakes with Airheart disc-brakes. A Hildebrand quick change rear end was located for a good price, and Tex Smith helped him adapt it to the '32 frame, as it had been in a Chevrolet sedan. For a number of years Scritchfield ran the rear end locked before breaking the ring gear. He then rebuilt it unlocked, making it easier to park at low speeds. After trying different gears, he found out that the street gear worked the best, so he always drove it in the Bonneville combination.[3]

Towards the end of 1960, Dick gave the roadster a Metalflake paint job, and the car is known as the first car ever to be painted in Metalflake. The Metalflake was painted in Eagle Rock, California, at a friend's body shop. Dick used two toners to arrive at the exact color he wanted. Rather than using Gold Metalflake as base for the Candy Apple Red, Dick used Silver Metalflake, with the final color coming closer to magenta or cherry red. After painting the car, Tex Smith thought it would be a good idea to drive the car down to Dean Jeffries for a photo shoot. The Metalflaked version of Dick's roadster, that Tex shot, was featured in Hot Rod Magazine February 1961, who ran a cover story on Metalflake paint. As the photo shoot was done at Jeffries' shop, many thought it was Jeffries that applied the Metalflake on Dick's roadster. The article did also discuss that an "older car was painted at Dean Jeffries", which made it sound like it was the roadster. In 2013 Dick told Kustomrama that "Dean was a great guy, and he could have painted it, but he didn't. It was at a time where I was learning and doing most of the work myself, since money was tight in those days." The older car mentioned in the story was actually Tex Smith's 1949 Buick, not Dick's roadster. The Buick paint did not make it to "show" or even "street" quality, and Dick can't remember how Tex got rid of it. Dick always enjoyed Tex's saying that the Buick looked "quite distinctive on Hollywood Boulevard." According to himself, "It was really bad (and I don't mean good) by today's meaning. Barris' came out much better. The large flakes were a bit "gaudy" for my tastes, so I opted for the smaller, less intrusive which Ducommun Industries and Ditzler provided. They were the original manufacturers and gave me pointers on spraying the flake. All the details were in the magazine article. With the new gravity feed guns, it would be much easier to apply. It really takes lots of clear coats, especially if using the large flake." When Ducommun Industries and Ditzler came up with flake, they were looking for a use for the excess from their metallic threads. Creating flake that could be shot through a spray gun was a problem at the time, as gravity feed guns had not become readily available and the nozzles on pressure guns were not large enough to shoot the flake. As Dick felt large flakes were too gaudy for his taste, he used the finer flakes. Dick remembers that Tom McMullen later had George Cerny shot his roadster with the large flake, but he had trouble getting the clear deep enough to cover the flake, and it didn't come out well. Dick believes the factory guys were sent to him from Hot Rod Magazine as they were looking for someway to showcase their product, wanting a hot rod, show car and a family car as their examples. The article from Hot Rod Magazine February 1961 showed the factory guys were working with Dick when it was painted.[3]

While Dick owned the roadster, it was featured in about 16 movies and television shows, such as Dragnet, 77 Sunset Strip, Happy Days and Fantasy Island.[3]

In 1970 Dick ran the Roadster in the C/Roadster class at Bonneville, and set a record of 165 mph. In 1971 he set a new speed record on Bonneville, running 168.212 mph as the world's fastest roadster in 1971. Power came from a 350 cid Chevrolet V8, and Dick held the record for 9 years. During that time the roadster was continually driven on the street. The acrylic lacquer on Dick's roadster lasted until about 1972, when he repainted it black because of the scorching of the door paint from running top speed with the headers open at Bonneville.[3]

After owning the roadster for 33 years, Dick sold it to Brian LaBonge.

In 1999 So-Cal Speed Shop restored the car back to its original version for its current owner Bruce Meyer.

April 12, 2017 the McGee roadster, the Hirohata Merc and the Gypsy Rose were announced as the 16th, 17th and 18th vehicles to be added to the National Historic Vehicle Register in recognition of their significance in American automotive history. All three vehicles were center stage on the National Mall that morning to mark the commemoration and opening ceremony for the third annual Cars at the Capital exhibition. The exhibition and documentation are part of the Historic Vehicle Association partnership with the U.S. Department of the Interior, Historic American Engineering Record and Library of Congress archives. As part of the exhibition, the McGee Roadster was showcased in an illuminated glass box in the National Mall from April 20-26, 2017.[4]

Please get in touch with us at mail@kustomrama.com if you have additional information or photos to share about Bob McGee's 1932 Ford.