The Gear Grinders of Bell

From Kustomrama
(Redirected from Gear Grinders)
Jump to: navigation, search 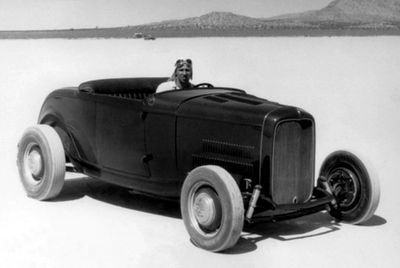 The Gear Grinders is a car club from Bell, California. The club was formed in 1938, with Jim Lindsley as the first charter member. The club joined the SCTA in 1940, at that time, there were 34 members. According to club historian Russ O'Daly, the historic roster shows there have been 764 members of the club over the years.[1]

At least three Gear Grinders members attended the inaugural Bonneville Speed Week. The Lindsley's were volunteer workers, and Phyl Lindsley made the first timed run on the salt flats to test the clocks.[1]

Please get in touch with us at mail@kustomrama.com if you have additional information or photos to share about The Gear Grinders of Bell.