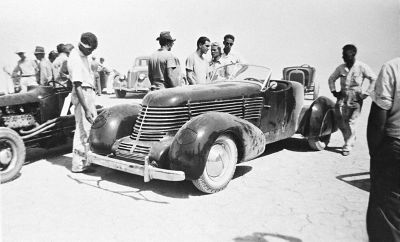 In 1936 Tommy contracted Frank Kurtis to build him the fastest and best looking hot rod in Southern California. The build was completed in in 1937, and is known as the 1937 Kurtis Tommy Lee Special. 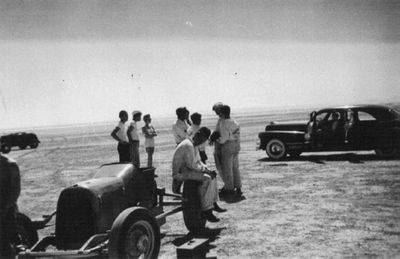 Bill Blystone sitting on the rear tire of Bill Blystone and Richard Grow's Modified at El Mirage in 1946. Tommy Lee's Cadillac limo can be seen behind the modified. Photo courtesy of James Donoho.

Tommy owned four Talbot Lagos that he raced. He purchased them through Luigi Chinetti, the famous Ferrari dealer and authorized representative of the Figoni et Falsachi coachwork house of Paris. 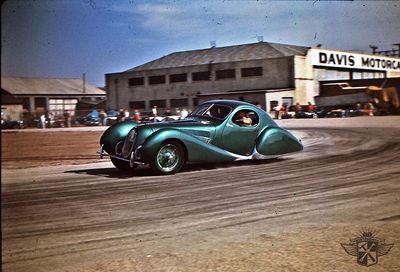 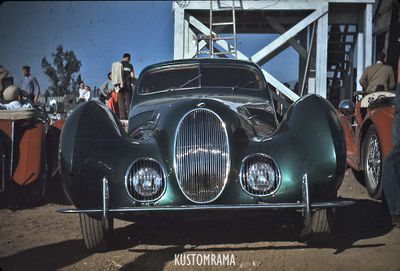 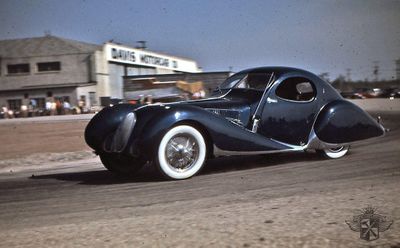 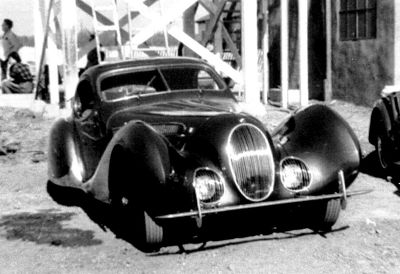 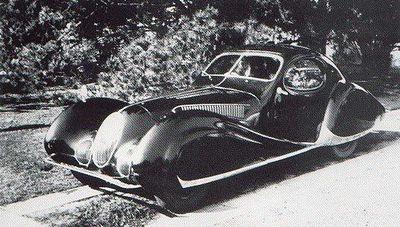 Tommy's Talbot Lago Figoni teardrop coupe with chassis numer #90107. This one was dark red and it featured covered wheels.

Thomas Lee, better known as Tommy Lee was the son of Don Lee, the famous radio mogul, California's most prominent Cadillac dealer and the owner of Don Lee Coachworks. Don's deal with Cadillac was that he got a cut off every Cadillac sold in California.[1] Tommy grew up in the thriving automotive world of Southern California and was constantly surrounded by larger-than-life Hollywood stars, exceptional automobiles and conspicuous wealth. At a young age, he developed an unbridled enthusiasm for all things mechanical and became a talented sailor in addition to developing his budding automotive skills.[2]

When his father died at age 53 in 1934, 28 years old Tommy Lee was left a fortune. A fortune that included seven Cadillac dealerships.[1] One of the richest single men in Los Angeles, Southern California was Tommy’s proverbial oyster. He was connected to some of Hollywood’s best-known actresses, had fabulous homes and lived in the lap of luxury. But his undying passion was automobiles and Tommy indulged in his beloved hobby. Over the years, he owned several 8C Alfas, Talbot-Lago Teardrops, Bugattis and two amazing Grand Prix cars – a 1927 Delage and a 1939 Mercedes-Benz. His fabulous cars were featured in the pages of Road & Track and he became so intrigued by California’s dry lakes – where he could test the full performance of his collection – that he bought a home near Muroc.[2]

In 1936 Tommy contracted Frank Kurtis to build him the fastest and best looking hot rod in Southern California. The build was completed in in 1937, and is known as the 1937 Kurtis Tommy Lee Special.[1]

In 1939 Tommy bought two 1938 Talbot Lago 150 SS'that were shipped to the USA the same year. These had chassis number #90108 and #90107. Tommy owned four Talbot Lago's that he raced. He purchased them through Luigi Chinetti, the famous Ferrari dealer and authorized representative of the Figoni et Falsachi coachwork house of Paris.

During the late 1940s Tommy was involved in an accident that left him with spinal injuries, sever back pain, and many other ailments. He was on heavy medication but his ailment also left him with depression. On January 13th of 1950 (Friday the 13th) Tommy had his driver take him to the dentist. He got on the elevator, and went to the 12th floor roof. He leapt from the roof of the Pelissier Building in Los Angeles. He was 43 years old,[3] and left behind a 10 million dollar fortune, a huge automobile and aircraft collection, a radio station, and a television business. His uncle inherited most of the assets, but Willet Brown was able to secure all of the cars.

Please get in touch with us at mail@kustomrama.com if you have additional information or photos to share about Tommy Lee.