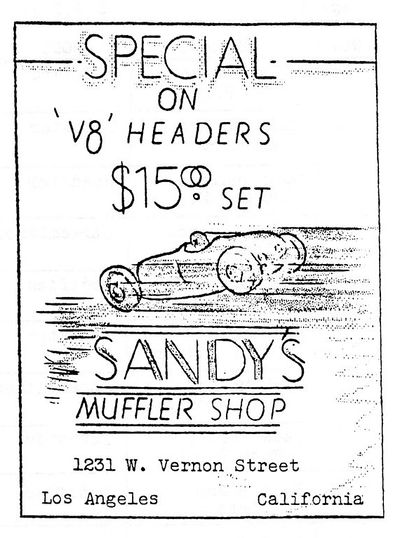 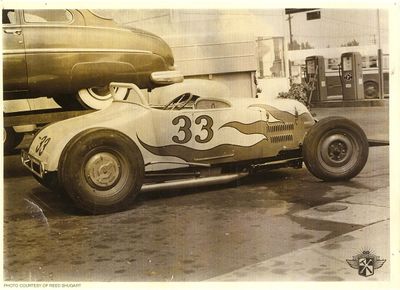 Sandy's roadster outside the space he rented from George Shugart in Culver City. The photo was taken in 1949. Photo courtesy of Reed Shugart. 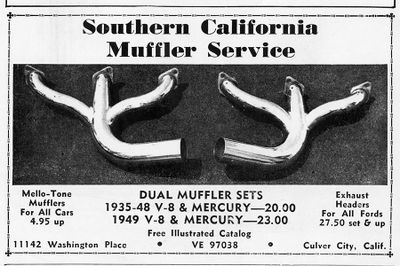 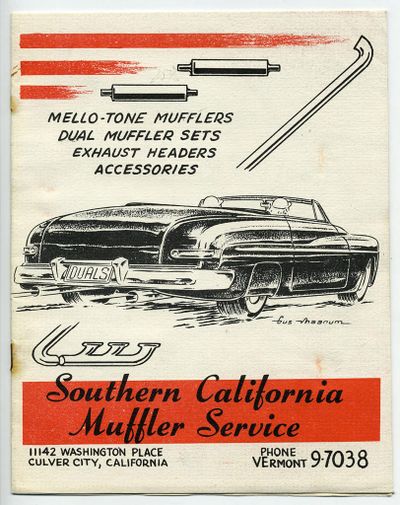 A catalog for Southern California Muffler Service. The drawing was done by Gus Maanum. Photo from The HAMB. 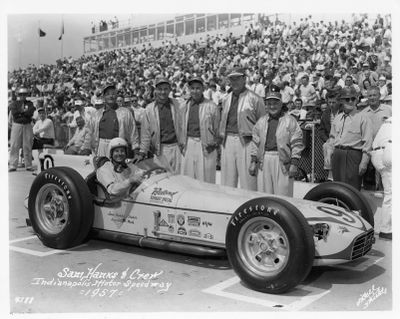 The Belond Exhaust Special with the 1957 Indy winning team. Sam Hanks is seated in the roadster. The team from left to right is Frenchy Sirois, Howard Gilbert, George Salih, Sandy Belond and either Shorty Barnes or Shorty Reeves. Photo from The HAMB.

Sandy Belond joined the Idlers car club in 1937, and he was on the founding board of the Western Timing Association as a Safety Comitee member. He officially began racing on the dry lakes in 1938 with a 1931 Ford Model A roadster that his buddy Sam Hanks helped him build. The roadster was one of the 100 cars to record a land speed of over 100 mph. It also won the Idler's Trophy Championship in 1938 and 1939, as well as the Sta-Lube Motor Oil Co Trophy in 1939.[1]

In Throttle January 1941 there is an ad for Sandy's Muffler Shop, announcing that Sandy's has moved to 5701 South Western in Los Angeles.[2] Before WWII, Sandy operated 3 Sandy's Muffler Shops in addition to the work he did at home. He started out at his house, and continued to do work there on midget racers until he was called away to join the war. Sandy become one of the first, if not the first Edelbrock dealer in late 1940, and he ran on of the first Slingshot intakes on his roadster early in 1941.[1]

The "Short Shiftings...." section of Throttle Magazine February 1941 could inform that Bob Lloyd and Sandy, both Idlers members, had bought Karl Orr's modified body, and that they planned to have it powered by Sandy's 107 m.p.h. V-8 motor for the next season.[3] Throttle Magazine May 1941 could also inform that Sandy was going after the best appearing car title that year in the SCTA. According to the text, "He got his roadster - the one he built especially for lakes races - all dolled up like Astor's pet horse."[4] Sandy raced his roadster at the Rusetta Timing Association sanctioned El Mirage May 18, 1941 meet. At the meet he reached a speed of 112.50 m.p.h. May 25, 1941 he ran the roadster again at El Mirage at a W.T.A sanctioned meet. The 25th he achieved a speed of 110.15 mph.[5]

The headers from Sandy's Muffler Shop cost $15 a set before the war if you were a timing club member. He also offered a little something more then off the shelf performance when you purchased his Sandy's Muffler Shop "W" header. The W header was a variation of the Harry Miller cast iron header designed for the 1935 Miller Ford V8 Indy cars.[1]

In 1942 at a REVS car club meet invitational it clocked what is arguably the fastest speed ever by a roadster in the pre-war years, 121.854 mph.[1]

Sandy joined the USMC, entered the war late, and was back by 1946. After WWII Sandy worked for a fellow named Archie Porter on Sunset Boulevard in Hollywood. It is believed that Sandy learned the muffler business from Porter in the mid 1930s at the Porter's Muffler Shop, and that he returned to work there for a short stint after the war. At Porter's Sandy met a coworker named Bob Hedman. Sandy, Bob and Bud Gregory proceeded with the manufacture of a couple of ideas Sandy had for a new equal length V8 60 header for midget cars.[1] Sandy and Bob began making headers on their own, paying Porter for the material. Then, they started installing their headers, and Archie let them run their own business alongside his. Sandy decided that he wanted to go back owning his own shop, as he had done before the war. He didn't have the money it took to open up his own shop, so he approached speed shop owner Karl Orr.[6] Karl lent him money and offered him a space in the back of his speed shop. Sandy installed a drive on lift on the west side of the Orr's Speed shop, and he moved into a small apartment behind the speed shop on the east side of the Orr's property with his wife Ruth and their daughter Donna. This was 1947, Bud came over with Sandy as the shop foreman and Bob joined them shortly thereafter. Sandy began building the midget headers with Bud, and they were a great success. He saved some money up and ventured into his next project creating the Sandy Belond Equa-Flow Exhaust System which revolutionized the header industry by creating the first ever jigs for exhaust systems.[1]

In 1948 Sandy's shop, named Souther California Muffler Service, was located at 11142 Washington Blvd. It was rented from George Shugart, who also ran a gas station with Bill Elliot at the address. In the beginning, Sandy rented space from George, but it didn't take long time before he took over the building.[7]

By 1953 there were more then 2000 Belond dealers, and Belond Systems were offered by dealerships as an option. He was so hooked up with the OEM that they would send the vehicles out to the Sandy Belond's Southern California Muffler Company to have system designed for their cars before the cars were offered for sale to the public. Sandy's muffler operation had grown so big that he built a steel mill in the West Central area of Los Angeles to founder his own exhaust tubing. The header and exhaust manufacturing section alone exceeded 15,000 square feet.[1]

In 1957 George Salih designed and built an Indy 500 race car. Powered by an Offy engine, the body was a Quinn Epperly job. It was nick named "the Sidewinder".[1]George borrowed $18,000 to build the race car, but he couldn't afford to race it. He built it to sell, possibly while it was still under construction. The prospective buyers thought the car was too radical, so after a while George arranged with Sandy to enter the car at Indianapolis as the "Belond Exhaust Special". Sandy's life long friend Sam Hanks drove it and set a new track record in it to win the 1957 Indy race.[8] The car did also win Indy in 1958.[1]

Sandy retired and sold the Belond Muffler Company to A-P Industries in 1958. The header division was sold to Bob Hedman. Hedman founded Headman Hedders and A-P Industries couldn't figure out how Belond made his business so successful, so they hired him back as a CEO. He remained as a CEO until his passing in the late 1980s. Eventually Belond gre A-P into W.R. Grace, an investment company that holds many aftermarket brands.[1]

In 1961 Sandy partnered with an old Indy pal to open Carlsbad Raceway[1], located between Los Angeles and San Diego.[9]

Sandy died of cancer in 1989. He is buried in Hollywood, California at Forset Lawn Cemetary and was survived by his wife Ruth, a daughter Donna and three grandsons.[1]

Please get in touch with us at mail@kustomrama.com if you have additional information or photos to share about Sandy Belond.