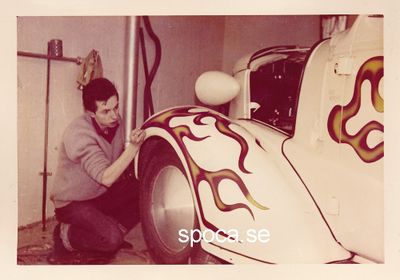 Bo Sandberg painting flames on Sillarna's Chevrolet in 1962. This photo was taken in Bo's garage in Flensvägen in Örby. Photo courtesy of Sven and Maude Sandberg, from Spoca.se. 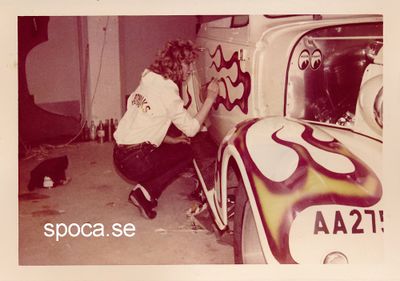 Bo's fiance Morris helping out painting flames on the car. Photo courtesy of Sven and Maude Sandberg, from Spoca.se. 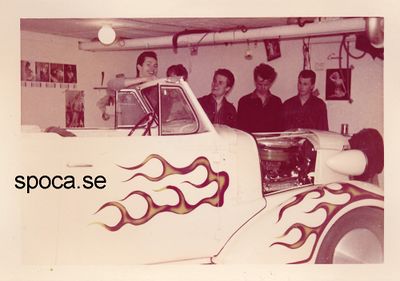 Another photo from the day Bo and Morris painted flames on the Chevrolet. From left to right in the photo: Bo Sandberg, Sven Sandberg, Hans Broberg, Kjelle Gustad and Bengt Wennergren. Photo courtesy of Sven and Maude Sandberg, from Spoca.se. 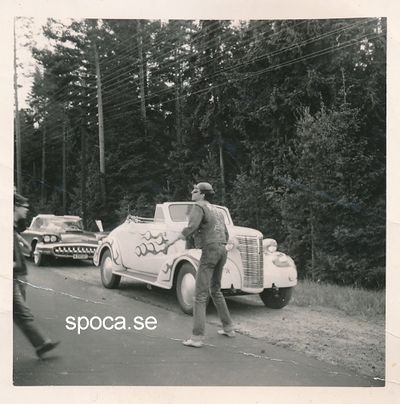 A photo of Sillarna's Chevrolet from 1962. This photo was taken before they hit a deer and restyled the front end. Bo Sandberg is standing in front of the car, wearing a flamed denim west. Photo courtesy of Sven and Maude Sandberg, from Spoca.se.

A photo of Sillarna's Chevy taken in 1963. The Mercury next to the Chevy belonged to Bosse Gamen. 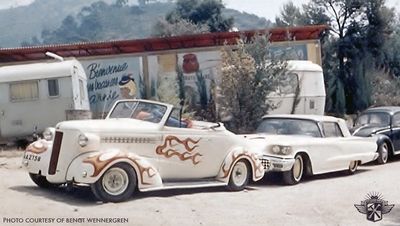 Hasse and Kjelle's Chevrolet during a trip to Italy in 1964. Bo Sandberg's 1959 Ford Thunderbird - Surfin Bird is parked behind the Chevrolet in the photo. Photo from The Bengt Wennergren Photo Collection. 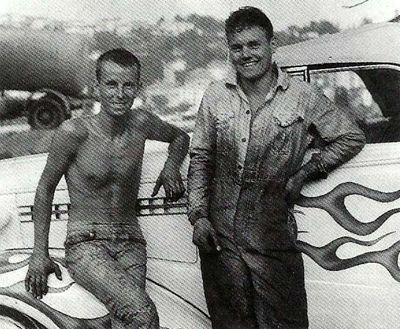 A photo of Hasse and Kjell taken in Italy. 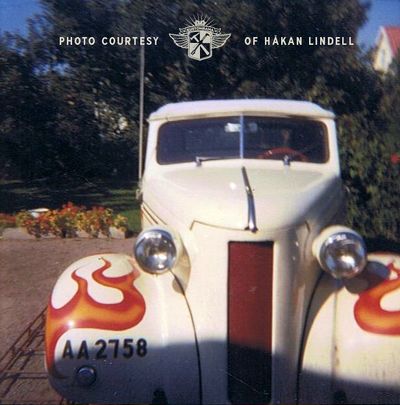 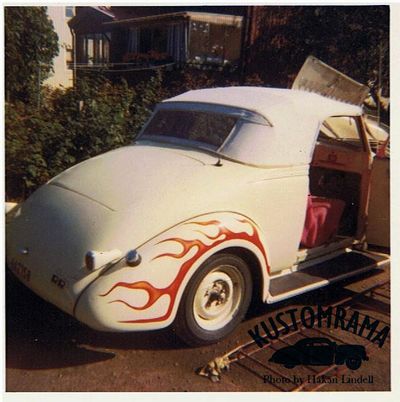 A rear end shot of Sillarna's Chevrolet from The Håkan Lindell Photo Collection. 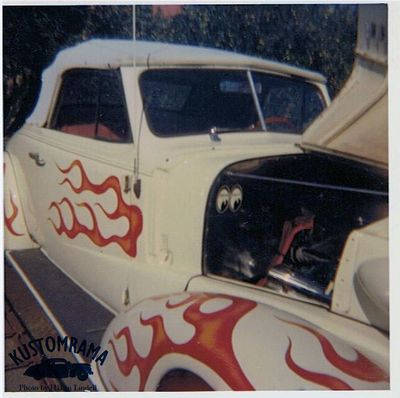 An engine shot of the Chevrolet taken by Håkan Lindell in the 1960s. Notice the Moon sticker on the firewall. In the early days of Swedish hot rodding, BoMac Racing in Älvsjö, Stockholm was the only place you could order hot rod parts from the US. BoMac Racing was a company run by Bosse Kasby and his brother Ove. After moving to the US, Bosse went on to work for Dean Moon at Moon Equipment in the 1960s. Photo from The Håkan Lindell Photo Collection. 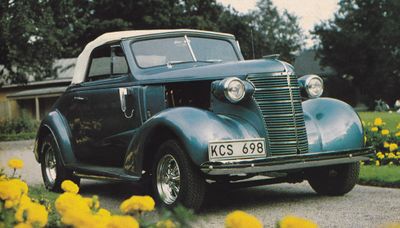 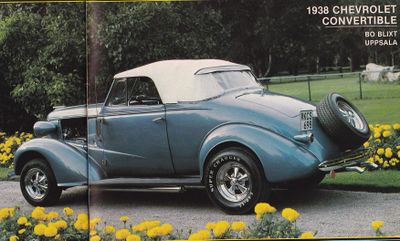 1938 Chevrolet Convertible owned and restyled by Hans "Hasse" Broberg and Kjell "Kjelle" Gustad of Huddinge in Stockholm, Sweden. Hasse and Kjelle had a club together called Sill Drivers, and they were known amongst friends as Sillarna. They bought the Chevrolet in 1962, after cutting the roof off a 1937 Ford tudor. An Oldsmobile V-8 engine was installed in the car, and the body was painted white. In 1962 Bo "Gamen" Sandberg and his fiance Morris painted flames on the car. According to Hasse, Gamen painted the flames, while Morris pinstipred the lines.

The front of the car was restyled after they hit a deer with it an early morning. Bengt Wennergren rode with Hasse and Kjelle that morning, and he remembers that the front was pretty beaten up after the accident.[1]

In 1964 a group of Swedish hot rodders and customizers drove their cars to the Riviera. Eight cars left Kungens Kurva in Stockholm on a rainy night. Hasse and Kjelle tagged along in their Chevrolet, Bosse Gamen drove an early version of his Surfin Bird Thunderbird, Palle Eriksson drove his 1924 Chevrolet, Krille Lundberg drove his 1937 Ford coupe, Inge Ellburg drove a 1955 Ford Sunliner, Junken drove his 1932 Ford and Bengt Wennergren brought his 1949 Ford. In Switzerland Hasse and Kjell busted the release bearing on the car. They located a phone booth and were able to call a garage. Luckily, the garage was able to fix a bearing or the 1946 Ford transmission, and it arrived on a bus the next day.[2]

Hasse and Kjelle sold the Chevrolet in 1965, as they were getting into boats instead.[3]

Staffan Runhag was one of the stakeholders for buying the car, however the new unknown owner took it to Anderstorp 1968 at Sweden's first Dragrace.
Now with Chevy engine and painted green. It appeared on Hot Rod Show 1970 and then get into Uppsala.


Bo Blixt is the man who makes an extensive and needful restoration of the car.

Hasse and Kjelle's convertible was restored in the 1980s. The body was basically put back to original and painted in a blue metallic color.


A white cab and a sofa from a 1960s Opel were installed along with Cragar SS wheels. The engine was a smallblock Chevrolet, TH350 transmission
and a Chevy 10-bolt rear axle.[4]

Bo sold it 1983 to Karl Sahlin from Märsta. It has now recently been sold to Magnus Olsson from Ellös on the Orust island.

Please get in touch with us at mail@kustomrama.com if you have additional information or photos to share about Hans Broberg and Kjell Gustad's 1938 Chevrolet.