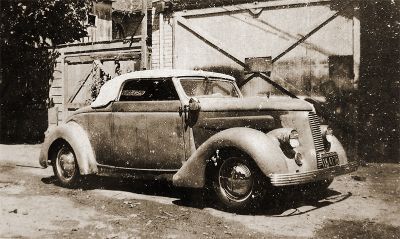 George's 1936 Ford Convertible was an ongoing project. When this photo was taken George was working at the Brown Brothers in Sacramento, where he had molded the lights and seams, chopped the top, lowered it, removed the handles, and fit it with a 1940 Nash grille. At the time, the car was also sporting 1934 Pontiac hood sides, DeSoto bumpers, and ripple discs.[1] 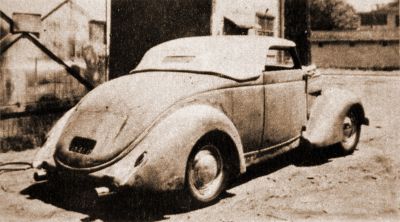 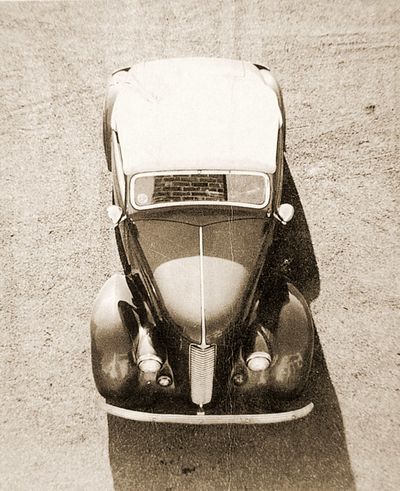 Another photo of George's 36 from the May 1953 issue of Hop Up Magazine. 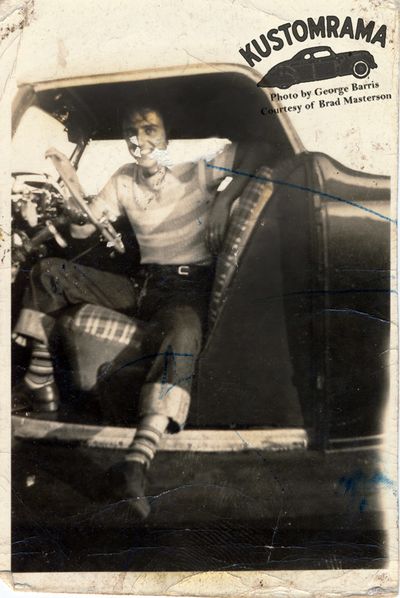 George sent this photo to his brother Sam, which served in the Navy during WWII. As you can see, he's all dressed up. The writing on the back of the photo says; "Here is that rascal of a brother of yours. But God bless him for he is all right". Photo courtesy of George Barris, from The Brad Masterson Photo Collection.

1936 Ford convertible restyled by George Barris of Roseville, California. The convertible was George's second 1936 Ford. He traded the car for his previous car, a 1936 Ford Coupe. The convertible was an ongoing project, and a photo taken of the car while George was working at the Brown Brothers in Sacramento shows the car with molded headlights and seams, chopped top, lowered suspension, removed handles, a 1940 Nash grille, 1934 Pontiac hood sides, DeSoto bumpers, and ripple discs. According to George, he had also installed teardrop taillights at the time.[1] The removed door and trunk handles were replaced by push buttons, the license plate was set in, and skirts were later added. After the build, George drove down to Oakland and had Hall Upholstery install a padded top.[2]

After moving south to Los Angeles around 1941, his new friends in lauded George on the fine job. Such things as push button doors and deck lids were practically unknown, so they urged him to stay and do body work if he could arrange it.[2]

One day in 1946 Gene Winfield spotted George in his convertible at a gas station in Modesto. He pulled in to the station in order to talk to the owner. Gene recalls the car being painted a real light apple green with several primer spots, and that the right front fender was missing. The right side of the car was covered with mud. George introduced himself, and told Gene that he was on his way back to Los Angeles where he and his brother were building custom cars. The name didn't mean anything to Gene at the time.[3]

Please get in touch with us at mail@kustomrama.com if you have additional information or photos to share about George Barris' 1936 Ford Convertible.