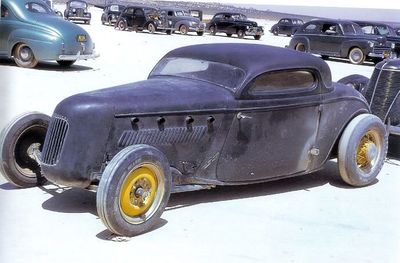 The coupe at an early stage, primered flat black. 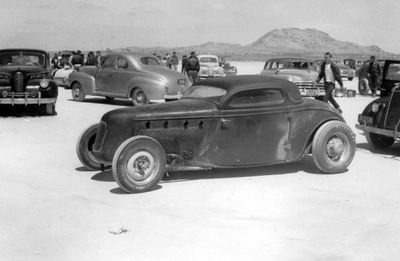 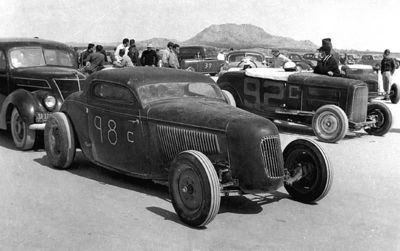 Doug's coupe at a Bell Timing Association meet in 1951. 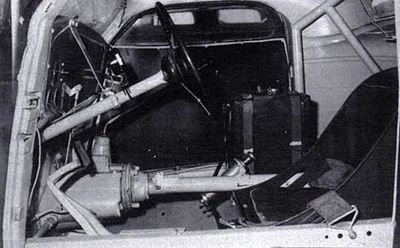 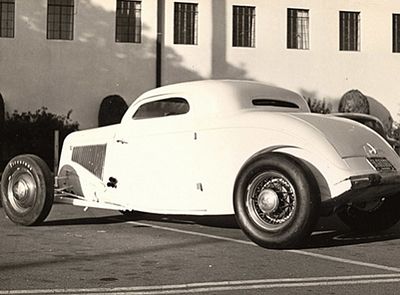 The coupe painted white before the script and sponsors tags were added. 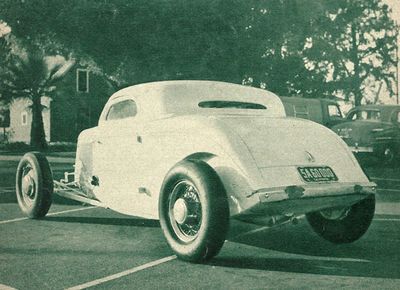 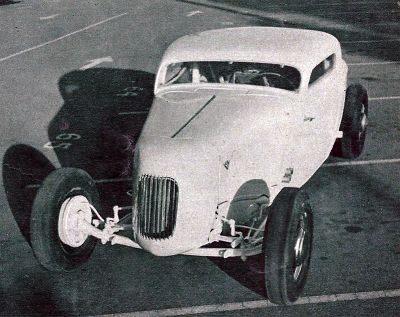 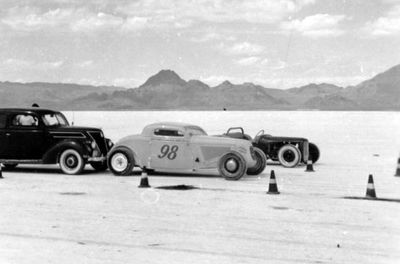 Doug's coupe at Bonneville in 1951. Photo from the Tim Rochlitzer collection.[1] 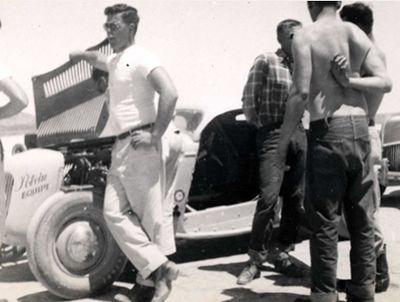 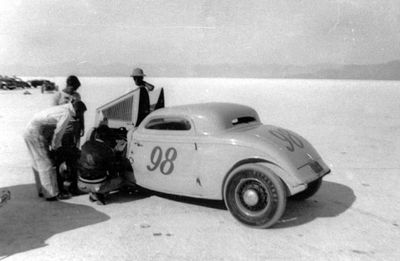 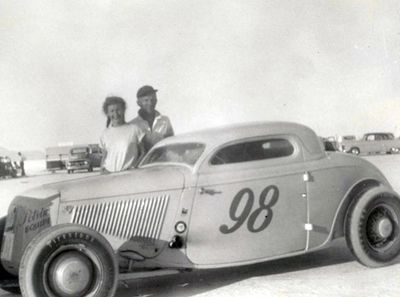 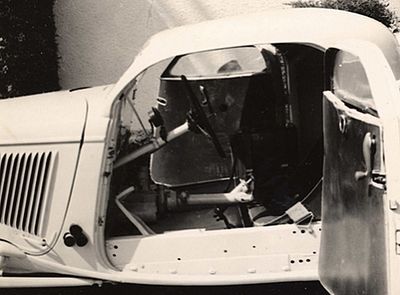 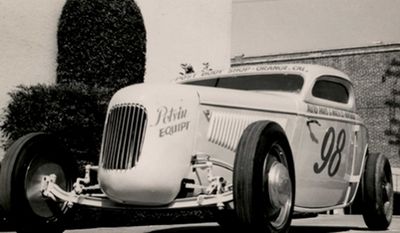 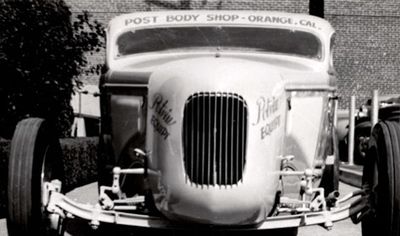 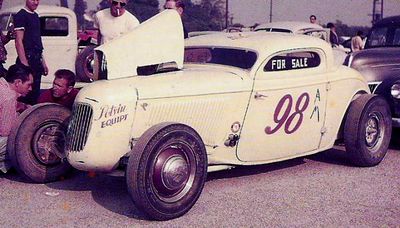 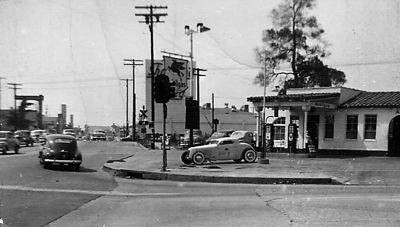 The coupe as it sat after it was sold, notice the tires.[3]

1934 Ford 3-Window Coupe owned and built by Lancers member Doug Hartelt of Anaheim, California. Lance built the coupe while working at Post's Body Shop. Harold Post did the bodywork on the car. The roof was radically chopped, a custom track nose was built and four exhaust outlets were made on the left hood side. When Doug first began to race the coupe it was painted flat black. Safety features included extra heavy roll bars, Plexiglas windows, safety belt, and quick fuel cut-off. Doug's car was featured in Hop Up October 1951 in a story from a Bell Timing Association meet. Doug entered his coupe in the meet to iron out bugs before the big Bonneville Nationals held August 27 to September 3 the same year. By then the car was powered by a 248 cu in. Ford engine that was fit with a Weiand four-carb set-up, Evans heads, Potvin ignition and cam. A tach was mounted to the steering column. Fuel pressure pump and nitro alky tanks were located at the driver's right. According to the story Doug reached 133.31 mph at the meet.[4]

At the june 1951 El Mirage meet Doug ran 134.932 mph to take second in class behind Bob Pierson. By Bonneville the same year the car had been painted white, and Doug ran his Modified Coupe in two classes at the meet. In Class B as the Hartelt entry it ran a 248" 1946 Mercury engine and turned 138.888 mph for third in class. In Class C as the Hartelt & Leon entry and fitted with a 296" 1946 Mercury engine it ran 158.450 mph for second in class. In 1952 the car ran on Bonneville as the Doug Hartelt & Dawson Hadley Class C Competition Coupe. The coupe was still powered by a flathead engine, and reached a speed of 162.82 mph for a first in class ahead of the Evans & Bentley Coupe at 161.94 mph.[1]

The flathead engines were later replaced by a 1951 Chrysler 331 cid Hemi V-8 that Doug purchased from a local Chrysler dealer. The dealer was replacing problem engines under warranty and selling them to local racers for $50 each. Stuart Hilborn had given Doug a Hilborn fuel injection unit to test out on the Chrysler Hemi. With the injection installed, the engine put out roughly 370 horsepower on methanol. Later on the engine was enlarged up to 364 cu in. Doug was a regular with the coupe at the lakes, attending both RCA and SCTA events, with runs in the 170 mph plus range. At Santa Ana Doug was getting speeds in the low 120s. After seeing Tom Cobb's coupe with a front mounted GMC blower, Doug started to experiment with a similar set-up on the coupe. Having a blower sticking up above the engine increased wind resistance and interfered with the driver's line of vision. Doug designed and fabricated the front drive for a 6-71 GMC blower and used a Crower prefab intake manifold to provide runners for the pressurized mixture. He mounted the Hilborn fuel-injection to the intake side of the blower. Test results showed that the fuel injection was not providing enough fuel to the engine. Stuart did not believe this. But the problem was solved by installing eight injector jets to feed fuel directly into the intake manifold runners in conjunction with the existing injectors on the blower. Along with this modification, a second fuel pump had to be added. This was the first attempt to put a GMC blower on the front end of a Chrysler Hemi.[5]

The coupe was later sold to two brothers who owned and ran a Mobil station in El Monte California. They were friends of Arthur Ray Webb and they all used to work on the race car at the station. The new owner fit the car with wide white walls and hubcaps.[3]

Please get in touch with us at mail@kustomrama.com if you have additional information or photos to share about Doug Hartelt's 1934 Ford.