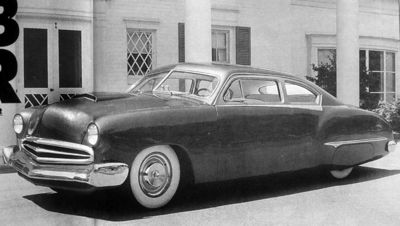 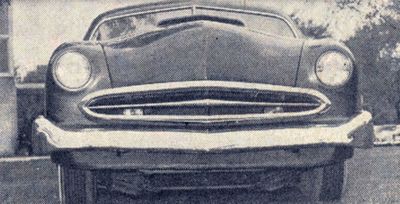 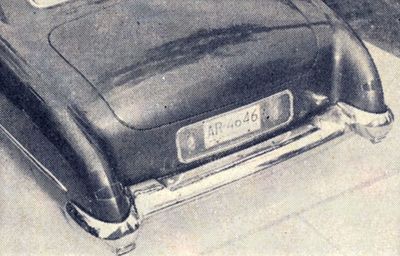 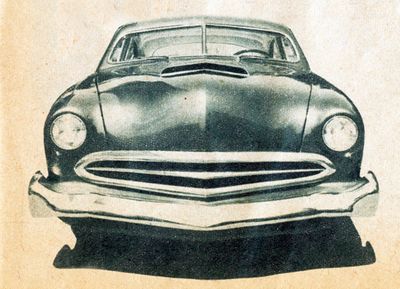 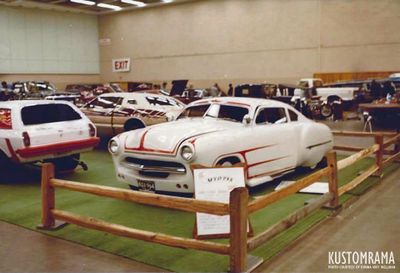 A photo of the Utopia taken at the 1980 Detroit Autorama, while Frank Wellman owned it. Photo courtesy of Donna Nixy Wellman. 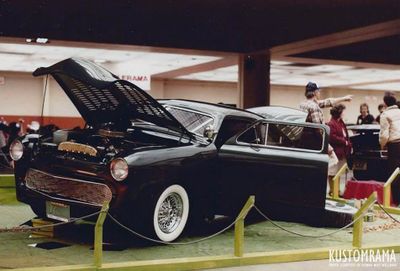 A photo of the Utopia taken at the 1984 Detroit Autorama. By then Frank had given it a deep forest green paint job. Photo courtesy of Donna Nixy Wellman. 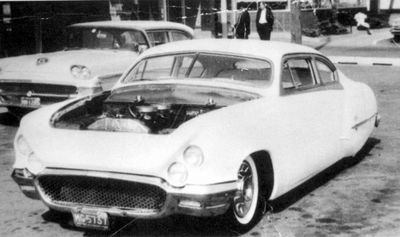 The Utopia painted white and fit with quad headlights. 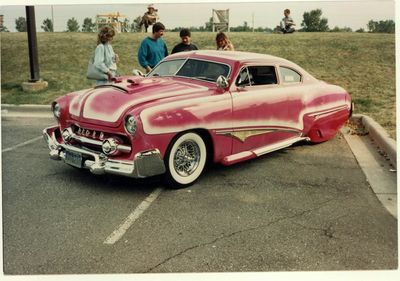 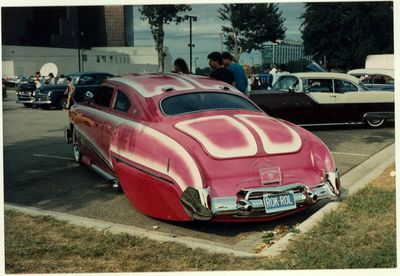 1950 Ford restyled by Clarkaiser Custom Shop for Alan Reason of Birmingham, Michigan. Alan's Ford became known as the Utopian. According to Mike McGann all custom cars were called by the owners name until Alan put a name on his Ford. Building the car at a student budget, It took four years to complete Alan's car. Alan modified the Ford with 1949 Oldsmobile 98 rear fenders. The rear was also extended 10 inches. Alan also sectioned the decklid so backup lights and license plate could be replaced below it. Both license plate and backup lights were recessed into the body. Both front and rear bumper were handmade using pieces from an 1952 Oldsmobile bumper and sheet steel. In the rear Alan created a wraparound bumper with concealed exhaust tips. Small taillights of plastic were placed in the rear fenders. Upfront, the car featured a hood scoop, frenched headlights, and a grille made of two 1951 Ford top bars. A floating 1951 Kaiser center bar was placed in the grille opening. The overall height of Alan's car was 50 1/2 inches. This was accomplished by chopping the top and radical lowering. The top was chopped 3 3/4 inches in front and 12 inches in the rear. Ground clearance was only 3 1/2 inches. The front was lowered 5 inches by cutting 1 1/2 coils out of the springs and underslinging the spring seats on the lower A-frames with a special box structure. In the rear, the car was lowered by a 7 inch Z job on the frame above the axle, another 8 inches was accomplished by re-arching the springs, reversing the eyes, and by using 1 1/2 inches lowering blocks. The car was powered by its stock Flathead engine. Once completed the car was done in a two-tone metallic green. The paint job was done by Al's Collision of Warren Michigan.

In 1956 the car featured a white piped Naugahyde interior with gold beading. The car is later featured in Car Craft August 1957 with a two-tone rolled and plead interior in white and green with gold. Both interiors was done by Williams of Royal Oak, Michigan. Later on, the front was restyled with quad canted headlights and a 1958 Ford Thunderbird front bumper. The hood was removed and the Buick hubcaps were exchanged for a set of Cadillac Sombreros.

In the 1960s the Utopia was owned by Jack Pieknik of Mount Clemens, Michigan.[1]

For Sale in Dearborn Heights

In 1972 Louis Lapham saw the Utopia advertised for sale in Dearborn Heights, Michigan. The asking price was $350. At the time it was modified, and Louis didn't realize it actually was the Utopia. It was advertised as a chopped 1950 Ford custom with no reference to its history. It was in a sad shape. The rear quarter windows were fiberglassed over, and small oval coach windows were cut in. Neither the Clarkaiser or later 1960 Ford Thunderbird front end was on the car at the time, it had been fit with a stock 1950 Ford setup. It still had a 1956 Chevrolet 265 engine, that the current owner tried to pass off as a 1968 Chevrolet Camaro engine. Louis got a ride in the car, and it ran so rough that he decided to pass the deal.[2]

By 1980 the car had been sold to Bearing Burners member Frank Wellman of Mount Clemens, Michigan. Frank displayed the car at the 1980 Detroit Autorama. By then it had been painted white with red scallops. By 1984 Frank had given it a deep forest green paint job. Frank sold the car around 1988.[3]

In 2007 The Utopia was owned by Tom Leichty, who displayed it at his private muesum in Brooklyn, Michigan. When Tom owned the car, the front had been built back to single headlights. Another bumper was also installed along with a 1953 Kaiser bumper guard. It was retrimmed and fit with lakes pipes, bubble skirts and dual spotlights.[4]

Please get in touch with us at mail@kustomrama.com if you have additional information or photos to share about Alan Reason's 1950 Ford.