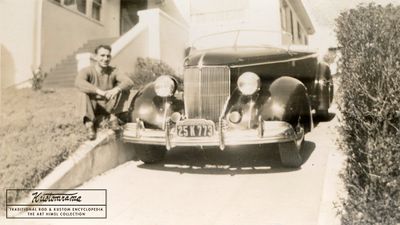 A young Tommy with his 1936 Ford custom. Tommy restyled the car in 1937. When this photo was taken, Tommy had removed the running boards, and added a DuVall Windshield. Photo from The Art Himsl Collection. 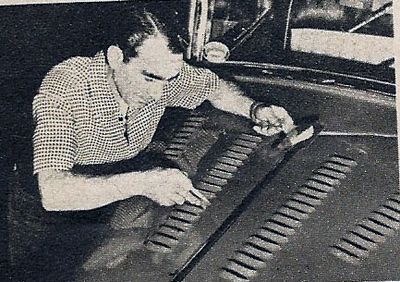 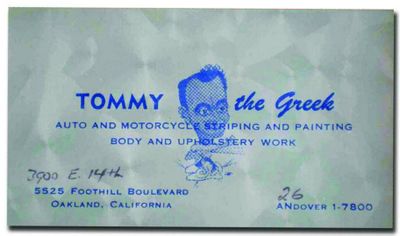 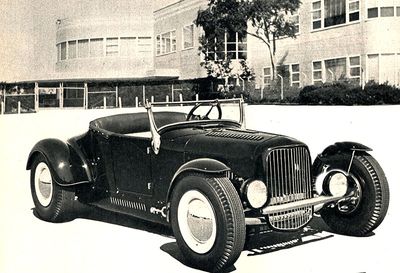 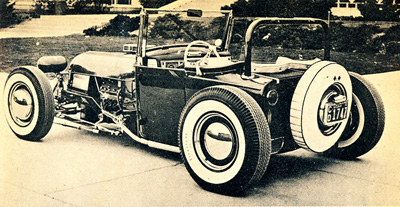 Jerry Woodward's 1929 Ford Model-A Roadster, "Thunder Road", of Utah was completed in 1957. The car was pinstriped by Tommy the Greek and it featured a mural on the glove box by Dean Jeffries. Jerry won the America's Most Beautiful Roadster award with the car at the 1957 National Roadster Show in Oakland. 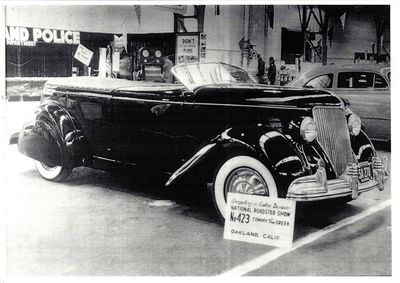 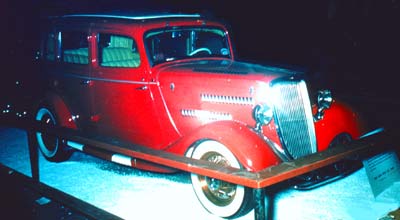 Gene "Clean Gene" Sadoian's 1934 Ford Four-Door Sedan of Fresno, California. The car went trough several iterations in the 1950s. In 1953, after attending the 1953 Oakland Roadster Show, Gene installed a 1950 Oldsmobile V-8 in the car. He also painted it fire engine red and had Tommy the Greek dress it up with pinstriping. Other modifications included a fully chromed and louvered hood, nerf bar bumpers, and copper-plated Kelsey-Hayes wire wheels. Tommy laid his famous "double walked stripes" on the sides of the car, while the headlamps received scallops. 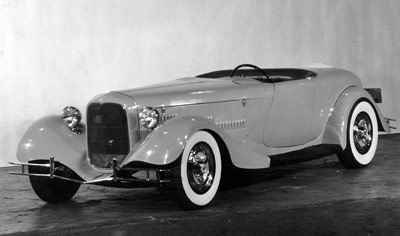 Bill Smith's 1934 Ford Roadster Custom of Alameda, California. Bill was a member of the Shamrocks of Alameda car club, and he set out to build the roadster in 1955. Built from a retired Tudor Sedan, Bill modified the body by cutting off the roof and moving it down to form the trunk. He completed the build the same year, showing it at the 1956 National Roadster Show. Tommy first pinstriped the car for Bill around 1956 - 1957. 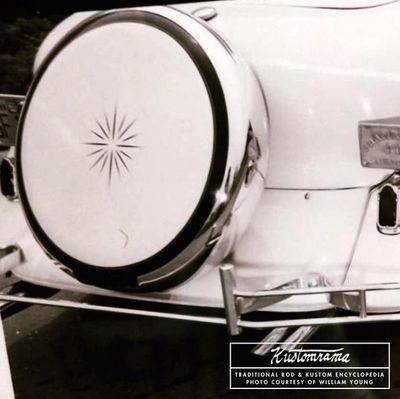 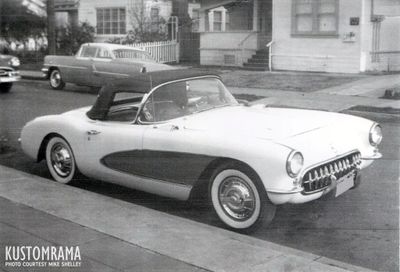 Bill Shelley's 1957 Chevrolet Corvette of Oakland, California. Tommy pinstriped an early version of the Corvette circa 1957-1958. "I had the taillights, headlights and the side panel striped. My Corvette was white with red inserts and interior. Tommy striped my headlights and taillights in red with black trim. He striped the side panel in black with white trim to look like a shadow," Bill told Kustomrama in 2017.

Joe Castro's 1955 Ford Thunderbird of Hayward, California. Known as "The CandyBird," Castro's Thunderbird was restyled by Joe Bailon at Bailon's Custom Shop in 1957. The CandyBird is believed to be the second car to have been painted Candy Apple Red. The first being Jerry Sahagon's 1951 Chevrolet. Dressed up with a scallop paint job, the accents on the car were pinstriped by Tommy. 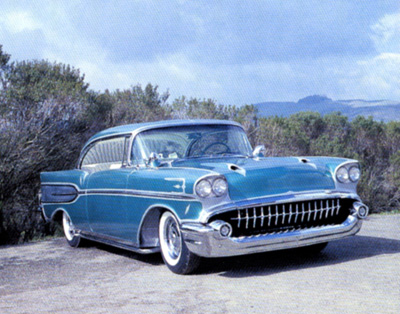 Lauralee Dobbel's 1957 Chevrolet, of the Rod Benders of Hayward, California was restyled by Bob McNulty.

Tommy went to work at his uncle's auto paint shop on Oakland's Broadway Auto Row in 1925. Tommy's job was to pull wooden wheels, rub out the spokes with pumince stone and then varnish each wheel prior to painting. At the shop they would rub out car bodies with gunny sacks and then wax and polish them up. Tommy could fix mechanical stuff too, but he preferred the painting, and mainly striping. Tommy recalls that his uncle wasn't too good at that part. He'd shake, so they let Tommy lay the lines. About that time, Tommy met a traveling striper and painter in Oakland, a Danish immigrant named Neils Hoegsberg. "He was the best," Tommy recalls. "Always smoked a pipe. Came around the shops with a little box holding his cans and brushes. He did it all freehand. He wanted me to be his partner, but I decided to stay with painting."[1]

It was the cars, striping, painting, and a penchant for the social ramble that kept Tommy the Greek ahead of the pack. By 1929, he'd scalloped a Model A roadster in blue metallic with pink striping accents. He'd already developed a signature, the Hrones hashmarks, teardrops and arrows, that served as final dashboard, fender or trunk lid flourishes. The Greek's skill was enough to keep him busy during the Depression years. "I'd make anywhere from a buck and a half to three dollars per car. I was fast and could do a bunch in one day, but sometimes I'd only get six bits for each job."[1]

Tommy's penchant for expressive styling eventually led to experimentation with early customs. In 1937, he restyled a 1936 Ford Phaeton by removing the running boards, adding a DuVall Windshield, shaving the door handles, adding fender skirts and bobbing the trailing edge of the front fenders, a la contemporary Cadillac - LaSalle styling. Tommy owned and sold dozens of cars in the '30s. He claims to have owned over 75 cars in his life, mostly Caddy sedans. That doesn't even take into account the endless stream of Indian, Triumph and Harley-Davidson motorcycles he's owned.[1]

In the 1940s Tommy had a shop in the back of a home on the north side of MacArthur West of Telegraph. Spence Kerrigan remembers visiting the shop once. Tommy came out of the area between the house and garage and said he was hung over. He was about to paint a car wheel there in the yard. Most painters would leave the wheel on the car or on a device where they could rotate the wheel and hold a paint brush against the wheel to make the stripe. Tommy laid the wheel on top of a 30 gallon oil drum and then walked slowly around the wheel holding the brush against the wheel. Even with a hangover Spence remembers the stripe was perfect.[2]

Mike Shelley worked with Tommy for a short time in 1957, sanding and preparing things for painting when he was at the Foothill Blvd. shop. In 2017 Mike told Kustomrama that Tommy was a joker; "He liked to trick visitors that would stand over him to learn his trade. He would tell them if they wanted to see him pinstripe to get closer and look over his shoulder, when they did he would reach over his shoulder with the pinstripe brush and paint them. His right hand was missing the end of one finger that he used to hold the pinstripe brush." After Mike worked with Tommy, he moved his shop to 39th Ave. at 14th Street. "He was a great guy and will be missed by everyone that knew him, his signature on most pinstripe jobs was his teardrops."[3]

Cars Pinstriped by Tommy the Greek

Cars Painted by Tommy the Greek

Please get in touch with us at mail@kustomrama.com if you have additional information or photos to share about Tommy the Greek.