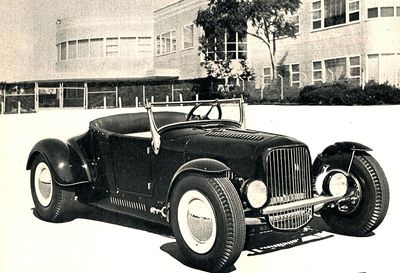 As it appeared in 1953. Photo by Ralph Poole 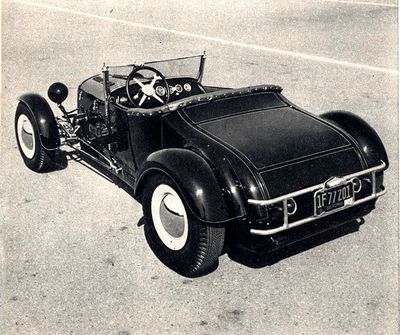 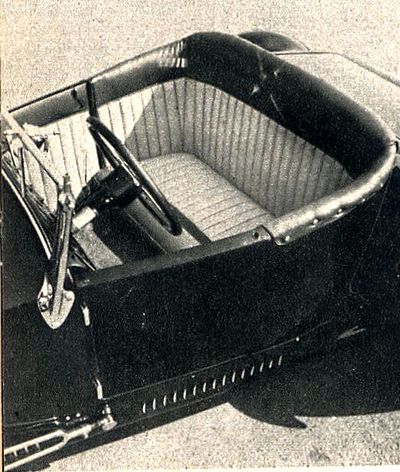 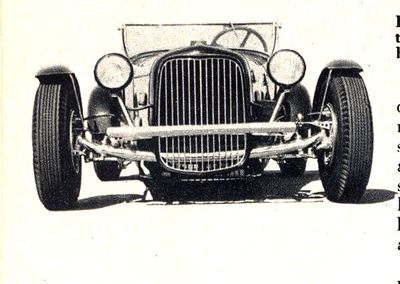 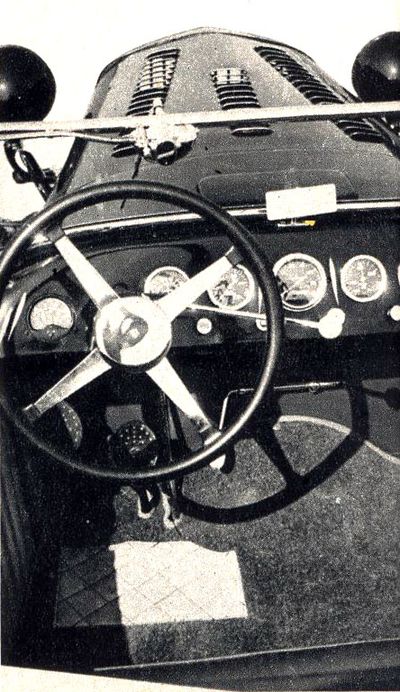 1927 Ford Model-T Roadster built and owned by Frank Rose of A & R Auto Mart in Oakland, California. Frank spread no expenses to make his roadster everything he wanted. The frame was constructed 2 1/2" diameter 125" wall chrome-moly tubing. The front axle was a chromed Ford tube axle, which was used in some '38-'39 Ford standard models, and quite a few Canadian Fords. At the time, tube axles were extremely hard to find and very popular among the hot-rodders, most of the tube axles seen on roadsters from this period were often converted Chrysler units. The wishbones were handmade and mounted on Ford truck tie rod ends, these wishbones resembled the type used on most race cars at the time. Everything removable on the front end was chromed, including axle, spring leaves, spring perches, shackles, shock absorbers, wishbones, backing plates, spindles, tie rod, drag link, spindle steering arm, shock arms, Nerf bar, headlight brackets, and grille.

The grille was hand built from round stock and chrome plated. The front and rear bumpers were hand made from steel, thickwall tubing and then chromed. The steering column was from a 1951 Ford pickup truck unit. This resulted in a very short drag link, but gets the box out of the way of the engine. Often in a car with a small engine like this, the steering is usually interfere with the left head or part of the exhaust system. The differential of the roadster carried 3.78:1 gears which coupled with the 7.00-15 tires, making a good combination for town use, not to high and not to low. Zephyr gears were used in the column shift transmission as well. Ford Houdialle shock absorbers were used all the way around. The engine in Frank's roadster was a V8 with Weiand heads, dual Weiand manifold, Winfield cam, and a converted Zephyr dual ignition. The engine had to be set well back in the frame, which helped the handling qualities. Due to the low engine compartment, the radiator had to be cut down. To solve the cooling problem, a new radiator was made with a four inch thick core.[1]

The body on Frank's T roadster was completely worked over by Jack Hagemann of San Leandro, California. Jack smoothed out the body and made many additions formed by hand from sheet stock. The fenders, bellypan, instrument panel, hood, deck lid, and the panel below the deck lid was hand formed from aluminum. Pontiac taillights were set in the rear panel, in a position that was well protected by a tubular bumper. Hall Upholstery stitched up a new interior in two tone blue. The dashboard was hand-built as well, and featured seven instruments, including tachometer, speedometer, ammeter, oil pressure gauge, temperature gauge, gas gauge, and vacuum gauge. A spring steel race car type steering wheel was adapted to the Ford steering column. Once all the bodywork was done, it was painted jet black lacquer. The car was pin-striped white and blue by no other than Tommy the Greek.[1]

In the winter of 1961, while stationed at Fort Ord, Bill Henney went to a car show in Monterey, California. He remembers that Bill Cushenberry's 1940 Ford, The El Matador was at the show, and he also believes that he saw Frank's old roadster there. Frank's roadster became one of Bill's all time favorites.[2]

Please get in touch with us at mail@kustomrama.com if you have additional information or photos to share about Frank Rose's 1927 Ford.