From Kustomrama
(Redirected from Throttle)
Jump to: navigation, search 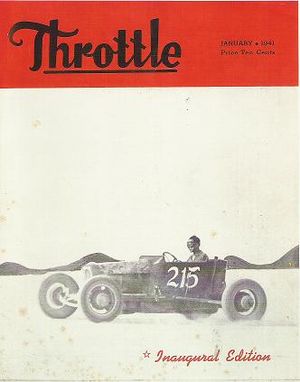 First released in January 1941, Throttle was the very first Hot Rod oriented magazine. Being produced 7 years before Hot Rod Magazine, Throttle featured hot rod racing taking place on the dry lakes surrounding Los Angeles. It also featured articles on speedway racing in southern California, Champ cars, and the Indy 500. Throttle Magazine was published before the term "Hot Rod" was coined, and the term can't be found anywhere in the twelve issues of the magazine.[1] The magazine, owned and produced by Jack Peters, was published out of Los Angeles, California. There is no record on how Throttle was distributed, but it is assumed that besides subscriptions, the magazine was sold at various lakes meets, speed tracks, speed shops, and garages. [1]

Throttle magazine closed down after one year because of America's involvement in WWII. In the combined November/December 1941 Issue of the magazine Peters wrote in his editorial how much growth there had been in his magazine and he was looking forward to an even more successful year in 1942. [2] The last issue of Throttle was distributed on December 5, 1941. During 1941 Peters managed to produce 12 issues. The November/December issue was combined, so the regular Throttle magazines count 11. But in May Peters created a special Indy 500 issue. [1]

Throttle Magazine didn't return after the war. And the issue publised December 5th 1941 was the last issue of Throttle ever. For many years nobody knew what had happened to Jack Peters, and many thought he was killed during his service in the war. In 2009 The Rodder's Journal published a hardbound book called Throttle: The Complete Collection, that featured full reprints of all the original 1941 Throttle magazines.[3] Those involved in the reprinted book did a lengthy search to find out what happened to Peters, and why he didn't continue his magazine after the war. Thom Taylor had lengthy talks to Wally Parks, Alex Xydias , and former Throttler contributor Louie Senter about Peters, but nobody knew what happened to him. They knew that Peters spoke at an SCTA meeting in 1942, which was the last time anybody remembers seeing him. After extensive research they solved the puzzle by doing searches on Jack Peters real name Jack E. Jerrils. Nobody knows why the alias was used more often than his given name, but the death record lists him as Jerrils. Through Jack's grandson Steven Jerrils, The Rodders Journal was able to solve the mystery. In September 1941 Jack became the editor of a community newspaper for the Crenshaw district of Los Angeles called Boulevard News. After returning from the war, he moved to Carson, California in 1947. By then he worked for the Harbor Belt Line Railroad in Los Angeles Harbor. Jack died from lung cancer in 1980, and his wife Phyllis passed away in 1999. It's hard to speculate why Jack didn't bring the magazine back after the war, or why he was never heard from again in racing/hot rod circles. According to his grandson Steve Jerrils it was part of Jack's nature to get involved in something and then drop it and move on to another thing. Steve also said that Jack was no gearhead, so it is natural to assume that Jack was tired of the hot rod / racing scene, and decided to move on with something else.[1]

Please get in touch with us at mail@kustomrama.com if you have additional information or photos to share about Throttle Magazine.