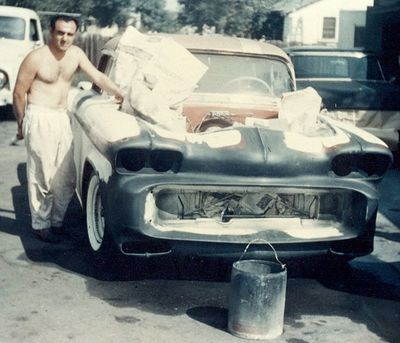 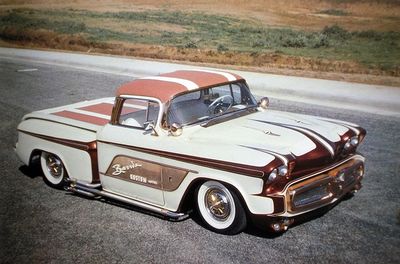 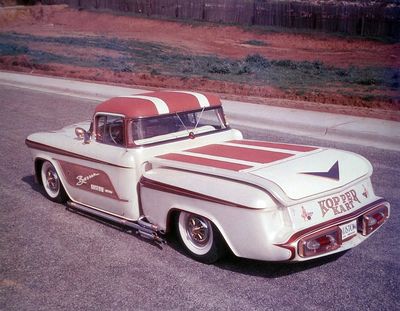 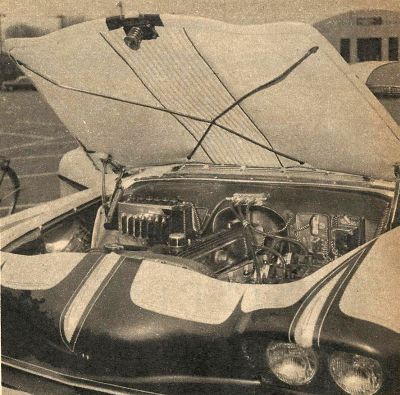 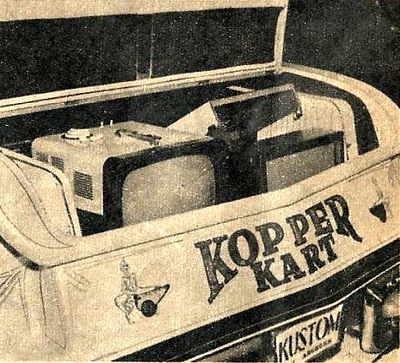 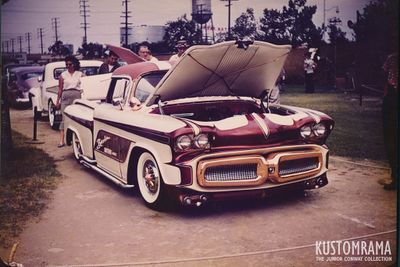 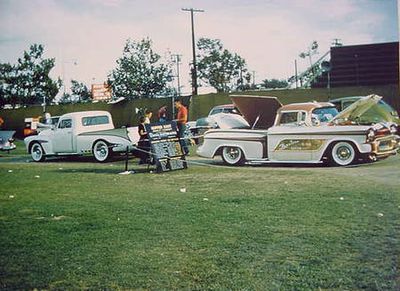 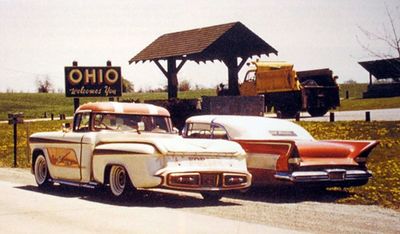 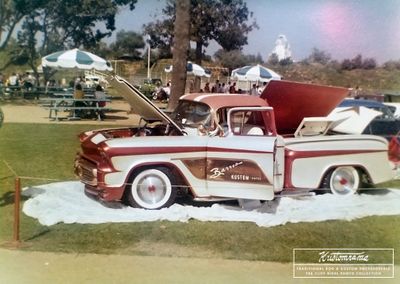 A photo of the Kopper Kart taken September 5, 1959 at the Disneyland Car Club Day and Autocade show in Anaheim. Bob Holley, worked as the Public Address Announcer at the show that day, and he remembers that he had to tell George Barris over the PA system that if he didn't move his car, a red Cadillac, which he had asked him to do at least twice before, then the club would push it off. The reason was that according to the agreement with Disneyland, they could not have any car motors started or running during the event for safety reasons. Photo from The Cliff Riehl Photo Collection. 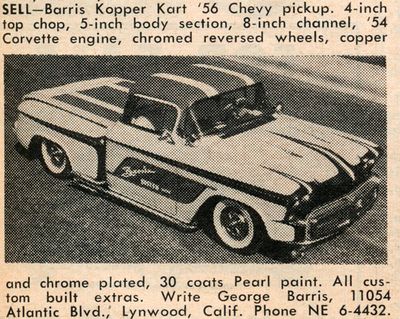 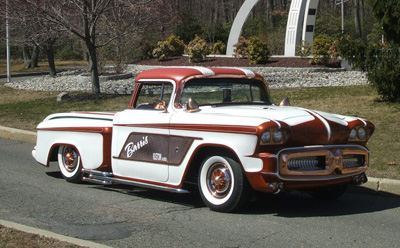 1955 Chevrolet Pickup restyled by Barris Kustoms of Lynwood, California for George Barris. When George purchased the truck, it had already been sectioned 5 1/2 inches. George, who wanted to use the truck as a promotion vehicle for his shop, had big visions for the Chevrolet, and he had his brother Sam chop the top 4 inches. The body was then channeled 8 inches over the frame for an even lower appearance. The front was restyled by installing quad headlights. 1957 Mercury bumpers were used to assemble the two large copper-plated grille housings. It had a Cadillac Autronic Eye automatic headlight dimmer installed in the grilles center bar. The grille was finished off by filling the openings with a copper-plated mesh grille. Both front and rear were restyled by welding Studebaker splash pans together. They also pancaked the hood, added twin scoops, and peaked the fenders.[1] The stock six-cylinder was replaced by a 1954 Chevrolet Corvette engine.[2] The The pickup truck featured accessories such as a portable TV set and a conventional phonograph in the bed. The record player was played back to the cab via interior speakers, while the portable TV was strictly a luxury item for Sunday picnics and outings. Once completed, the truck was named the Kopper Kart. Most of the trim on the truck that would have been chrome plated was copper-plated instead.[3]

Shown in the Special Class

George Barris advertised the Kopper Kart for sale in the March 1960 issues of Motor Trend and Hot Rod Magazine. The book Custom Cars of the 1950s Andy Southard has photos of the truck taken in March of 1960. According to the captions, this was the last time that Andy saw the car.[4] Jim Skonzakes of Dayton, Ohio bought the truck from George in 1960.[5]

Jim Skonzakes owned the Kopper Kart for a short while, before he sold it to Barons member Paul Blasberg of Mansfield, Ohio. The Kopper Kart was featured in Custom Rodder September 1961. By then it had + 40,000 miles on the odometer, and it was owned by Paul. Paul owned the truck in the early to mid 1960s. After having a lot of fun with it, the six-cylinder engine was pulled to make way for a 3/4 race Cadillac mill in preparation for running at the dragstrip. The truck was supposedly never reassembled again, and it was left outside to deteriorate.[5]

In the fall of 2000 John Maurice set out to clone the Kopper Kart. While researching the truck. he talked to Paul Blasberg's wife who could tell him that it had really "gone to pot" from the rainwater getting through the exterior upholstery. A man came to the couple and offered to fix up the truck. Instead, he ended up stripping it. As Mr. and Mrs. Paul Blasberg had already had their fun with the truck, they weren't too worried about the situation.[5] Supposedly the bed and cab went separate ways.[6] Please get in touch with Kustomrama at mail@kustomrama.com if you have any information to share about the fate or whereabouts of the long lost Kopper Kart.