From Kustomrama
(Redirected from The Ala Kart)
Jump to: navigation, search 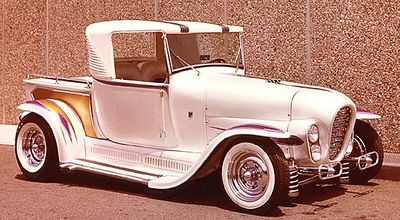 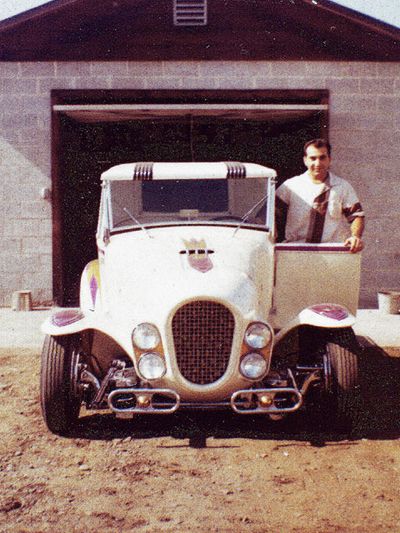 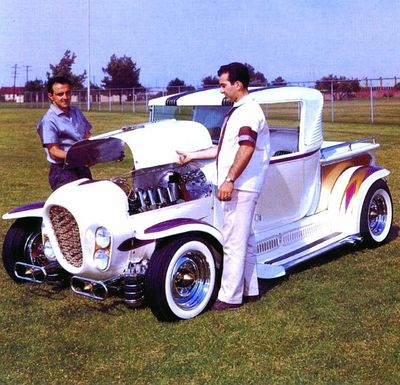 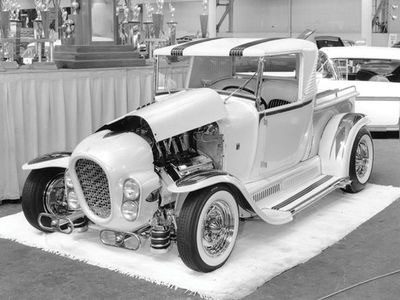 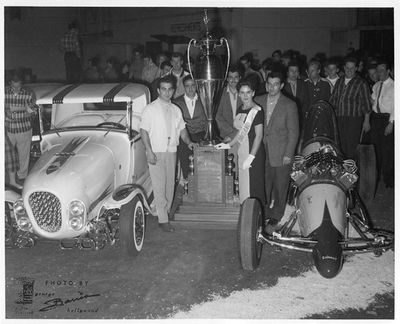 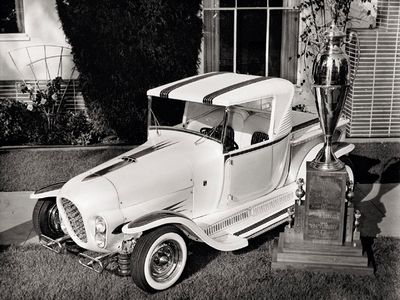 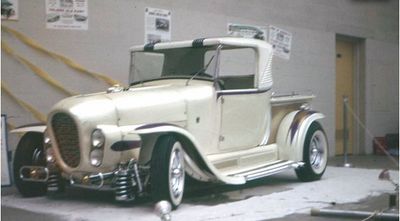 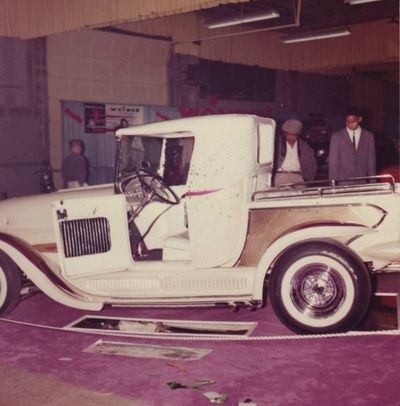 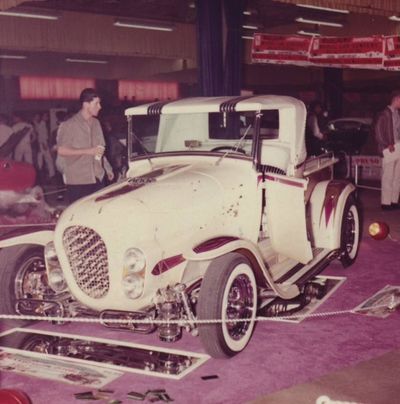 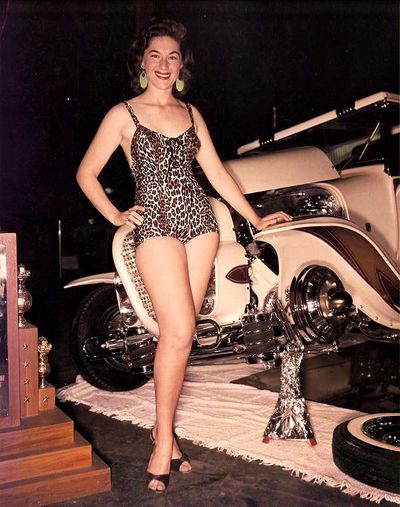 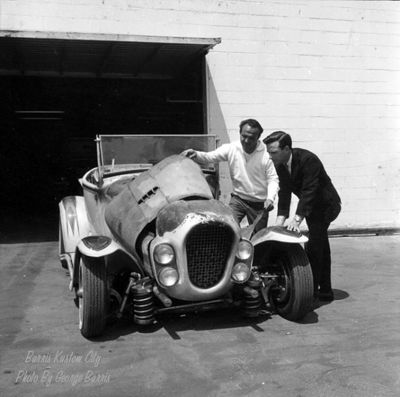 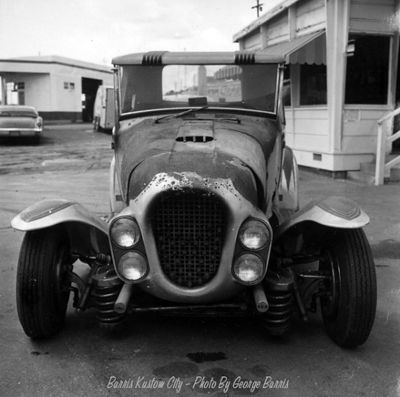 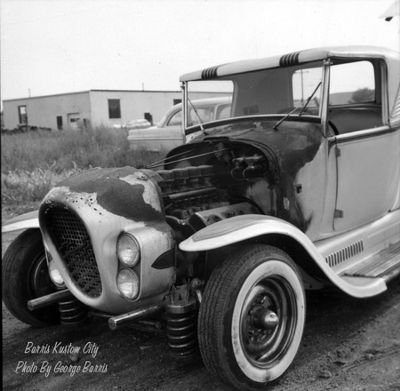 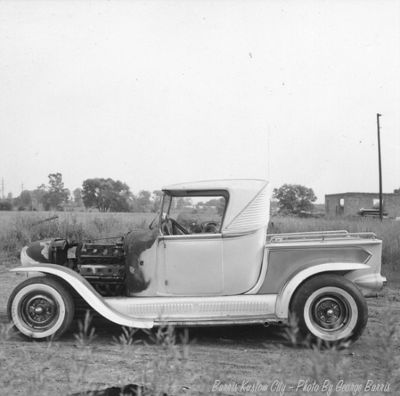 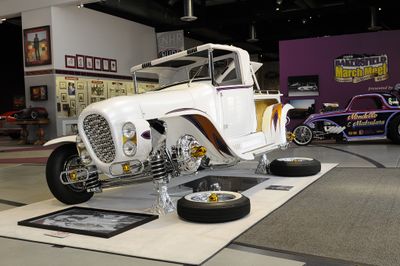 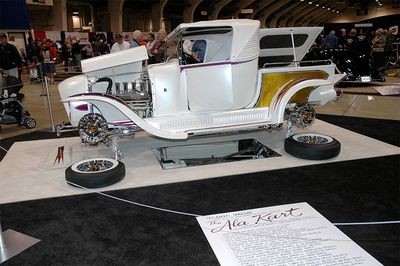 The restored version of the Ala Kart at the Grand National Roadster Show 2008. Photo by Howard Gribble 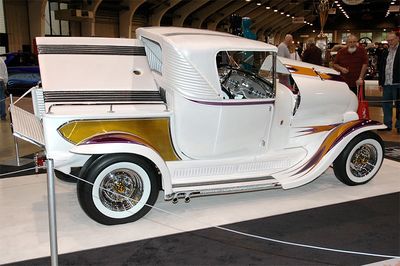 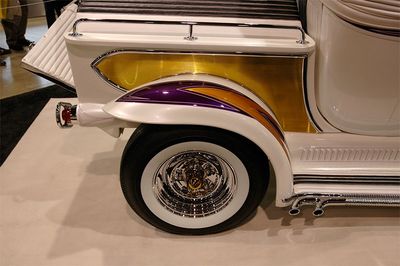 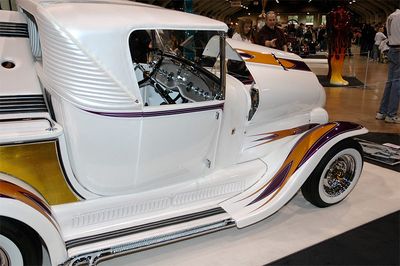 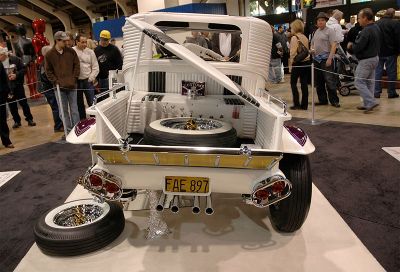 1929 Ford Midel A Pickup restyled by Barris Kustoms for Richard Peters of Fresno, California. Built expressly to win the America’s Most Beautiful Roadster Trophy at Oakland Roadster Show, George Barris began the construction on Richard's flathead powered pickup truck in 1957. Peters had raced his flatbed truck on the dirt roads around the central California farming community before he decided that it was time to make it faster and nicer. Ironically, the truck actually won the AMBR prize twice, first in 1958 and then again in 1959.

The back body section was taken from a 1927 Ford Model T Roadster. The bed was completely hand formed and fitted with handmade trim. The bed had a tonneau cover which was upholstered with rolled and pleated Naugahyde matching the interior. The taillights are a combination of 1958 Chevrolet Impala and 1956 DeSoto bezels and lenses. The hood is a three piece unit with a continuous scoop made of Reynolds aluminum. The grille shell is made of hand formed metal and tubing and houses the quad lights are from a 1957 Imperial. Aside from the hood, all body work was done in 20 gauge cold rolled steel.

The engine is a fuel injected Dodge Red Ram hemi with the Dupree chrome dome double electric fuel pump, Hunt Magneto, Isky cam, Jahns Racing pistons and Ansen rods. The rear end is from a late model Ford complete with hydraulic brakes. The emergency brake is electrically operated by switch mounted on the dash. The suspension system is all made up of 4 coil springs with adjustable air bags. Torsion bars are Traction Masters with stabilizers. The transmission is a Lincoln Zephyr unit with 3.43 rear gears. The steering wheel was taken from a Lincoln Continental and the complete dash is hand formed with S-W dials. Wheels are chrome reversed units with spun bullets and Dunlop tires.

The top is all made of steel bows and covered with black Naugahyde. The interior has split wrap-around, semi-circle seats done in white pearl Naugahyde and black velvet with chrome beading between each pleat. Carpets are Mouton Black fur. The interior was done by George's in-house upholsterer Roy Gilbert. The electrical system is 12 volt Autolite. Underneath, the flooring and pans are upholstered to match interior.

All four fenders have been bobbed and v-pointed and completely finished on the underside the same as the top. Nerf bars and the exhaust system are chrome plated with ripple side pipes fitted on the shortened running boards. The Kart was finished off with forty coats of white diamond dust mother-of-pearl with projection scallops in Kandy Cerise and gold leaf with pin striping, all hand rubbed to to a high luster. The scallops and paint were laid by George Barris himself, while Dean Jeffries did the pinstriping. The prep and some of the masking was done by Hershel "Junior" Conway.

While George did the wild body and paint, Richard Peters and Blackie Gejeian built and chromed the chassis back in Fresno.During the build, on December 7, 1957 the Barris Shop caught fire, and fourteen cars were lost to the blaze. The Ala Kart was in a separate room, and was luckily spared from the fire. With the Oakland Roadster Show only a couple of months away, things were now in a real hurry. In order to get the interior finished Peters ended up buying Roy Gilbert new stitching equipment.

The car was shown at the ninth annual National Roadster Show, held February 15-23, 1958. Being advertised as a $15,000 hand-built pickup, Richard won the grand award, a $5,000 nine-foot gold trophy being judged as America's Most Beautiful Roadster of 1958. The car was displayed on a filted elevation with mirrors reflecting the chrome under-carriage and white Naugahyde under-flooring. [2]

In 1960, Peters father demanded him to sell the car so he could focus on the family's agri-business. Barris had by then made an agreement with AMT to make a model of the car, without involving Peters. In order to rectify the deal, Peters ended up selling the car to AMT for promotional purposes.

The Ala Kart is known for being the first Show Rod that turned into a model car kit. AMT bought the Ala Kart in 1961 and the model kit was released late that year. The Ala Kart model kit sold more than 1 million kits the following year.

In order to make the car more driveable in and out of shows, the Hilborn injectors were swapped for four Stromberg 97 carburetors. In November of 1963, while the Ala-Kart was being driven by AMT's Budd Anderson, an electrical wire shorted out and melted the plastic fuel lines which allowed gasoline from the electric fuel pump to set the engine compartment ablaze doing serious damage to the hood and leaded cowl. The February 1964 issue of Rod & Custom reported the story in an article titled "The End of the Ala-Kart". For the next year, the winner of 2 AMBR awards and over 200 other top trophies was stored in a Detroit garage. After receiving many letters from Ala-Kart fans, AMT sent the Ala-Kart back to Barris' North Hollywood shop for restoration, coinciding with a re-release of the kit, which was chronicled in the September through November 1965 issues of Rod & Custom. At that time Rod & Custom proclaimed it "America’s most popular Hot Rod." In 1966 the Ala Kart was sent to a new project shop they had set up in Phoenix, Arizona. Gene Winfield was hired by AMT in order to work on their 1:1 show cars in this shop.

In 1966, AMT sold the Ala Kart to Goodyear Tire dealer Jack Shira. Jack painted his logo on the doors, and displayed the Ala Kart in the lot of his store in the hoot Phoenix sun. After a few years Jack's shop was closed, and the car disappeared. The car changed hands several times without any major changes being made to it. Nick Vaccaro was able to track the car down and acquire the famous Ala Kart. In 1973 Vaccaro ran an ad on the back of Hot Rod Magazine offering the car for sale. Vaccaro had disassembled the Kart and stripped most of its body. He had also began to make a new chassis for the car, with a TCI frame, smallblock Chevy engine and Jaguar rear end. Nick Vacarro owned the car at until 1996.

In 1996 a restoration of the car began at the Hershel "Junior" Conway House of Color. In the fall of 2001 John Mumford acquired the Ala Kart, and brought it to Roy Brizio's shop for a full restoration.

The Ala Kart appeared in the Hot Rod Gang movie from 1958.

Please get in touch with us at mail@kustomrama.com if you have additional information or photos to share about Ala Kart.