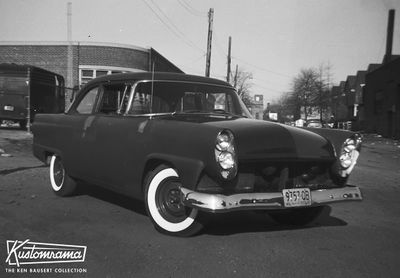 A photo of Sal's Ford taken in 1962. The canted quad headlights were grafted on by Woody. The build was never completed, and Sal sold the car and bought a new Pontiac Bonneville convertible shortly after this photo was taken. Photo from The Ken Bausert Photo Collection. 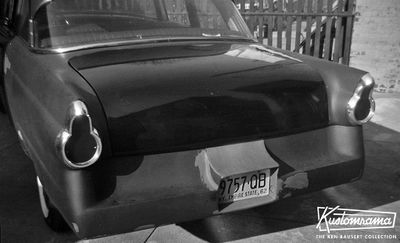 A rear end shot of Sal's Ford taken in 1962. The rolled pan and license plate treatment were all Woody's welding and fabrication. Other modifications include a shaved deck lid and 1955 - 1956 Mercury station wagon taillights with custom lenses. Photo from The Ken Bausert Photo Collection. 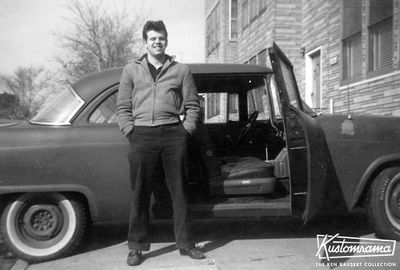 A photo of Sal next to the Ford in 1963. The photo was taken outside his house on 125th Street. Photo from The Ken Bausert Photo Collection.

1955 Ford owned by Sal Consiglio of New York City, New York. Sal lived in the Richmond Hill neighbourhood, and he was a member of the 1320 Crusaders car club. "The '55 Ford was John's, Sal’s brother’s, car, but he gave it to Sal when he bought a new Chevy 409," Ken Bausert told Sondre Kvipt of Kustomrama in 2017. Sal was one of Ken's best friends in high school, and photos taken by Ken in 1962 shows it featuring canted quad headlights, a rolled rear pan, and 1955 - 1956 Mercury station wagon taillights; "Sal was a perfectionist and painted each panel of the car only after he made sure it was perfect. The canted headlights, the rear rolled pan and license plate treatment were all Woody's welding and fabrication, and then Sal was finishing it."

Please get in touch with us at mail@kustomrama.com if you have additional information or photos to share about Sal Consiglio's 1955 Ford.