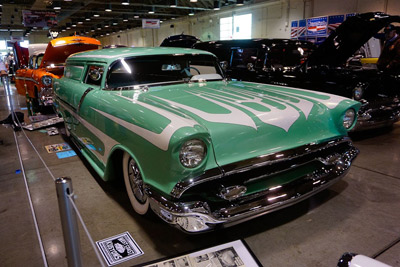 Rich Pichette's 1957 Chevrolet Sedan Delivery of Moreno Valley, California. The car was restyled by Bill Hines and Gary Minor after a rear end accident in 1992. The build was completed in 1998, featuring scallops designed by Jerry Weesner and pinstriping by Larry Watson.

Rich was born in Waterbury, Connecticut. He was the son of Rosaire "Curly" Pichette and Doris Pichette.[1]

Rich was President of the Eagles of Bristol car club in Connecticut.[1]

Rich moved to Moreno Valley, California where he became the Founder and past Governor of the Moreno Valley Moose Lodge. He was also ROP Restaurant Occupations Instructor at Moreno Valley High School.[1]

Rich brought cruising back to life, starting in the Inland Empire when he and his wife Penny owned the Jet Drive-In in Moreno Valley (Sunnymead, California). Cars would come as far as Los Angeles and San Diego to experience what it was like in the 50's. Rich was one of the Founders of The Desert Tin Car Club and a member of The Old Farts Racing Team.[1]

Rich created West Coast Kustoms Hall of Fame, which recognizes past and current car builders, as well as others that were responsible for building and promoting the hobby. Rich himself was inducted into the Grand National Roadster Show Hall of Fame, the San Francisco Rod and Custom Show, Kustom Kemps Hall of Fame, Lifetime Achievement Award for KKOA and the Ricky Award. September he was also inducted into the Route 66 Hall of Fame in San Bernardino, California. A special recognition was also bestowed on him for his tireless effort in bringing back the awareness to Customs for the past 30 years, at the Long Beach Motorama.[1]

Please get in touch with us at mail@kustomrama.com if you have additional information or photos to share about Richard Pichette.