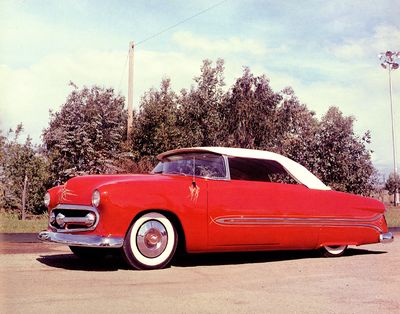 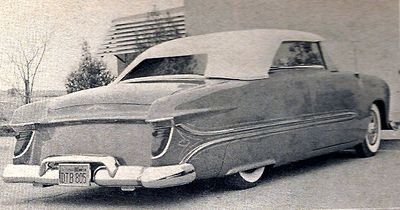 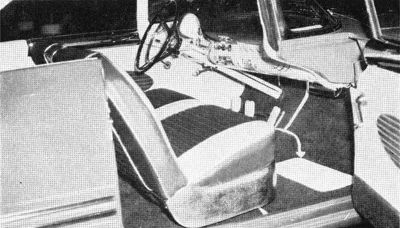 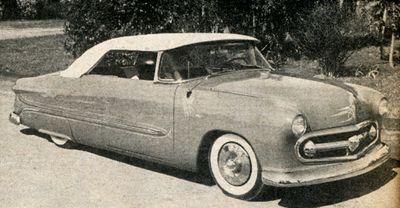 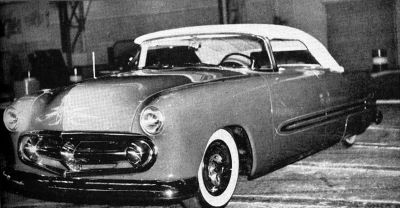 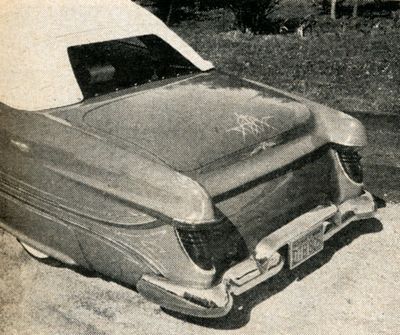 1950 Ford Convertible owned and restyled by Pete Millino of Oakland, California. Pete's Ford was restyled around 1956/1957, and the cowl was reworked to accept a 1956 Ford convertible windshield and dashboard. The new windshield was enhanced by a padded Carson-style top that featured a 3 inch overhang across the top. The front end was restyled by filling the hood, frenching the headlights and by creating a new grille made from 1951 Ford pickup parts. The front bumper was smoothed and the rear bumper was replaced by a 1956 Pontiac split bumper. The stock deck lid was discarded in favor of a 1955 Ford deck lid. The rear-fenders were extended 7 inches and reworked to accept a pair of 1955 Lincoln taillights that were installed upside-down and blended to the factory wind splits.[1] A pair of flared fender skirts were added. The side trim was made out of 1956 Chevrolet and 1956 Oldsmobile components. The door handles were shaved and the doors were operated by a special radio control carried in the owner's pocket, working up to a 10 feet distance. The car was lowered 7 inches, and Millino added a set of custom hubcaps he had made from 1953 Cadillac Sombreros fit with 1954 Lincoln bumper guard center spinners. Once the bodywork was done, the car was painted in a Huntsman Red lacquer with white pinstriping.[2]

According to Trend Book 156 Custom Cars 1958 Annual, all the bodywork was done by Joe Bailon of Bailon's Custom Shop of Hayward, California. The article also states that the whole car was widened and lengthened.

Please get in touch with us at mail@kustomrama.com if you have additional information or photos to share about Pete Millino's 1950 Ford.