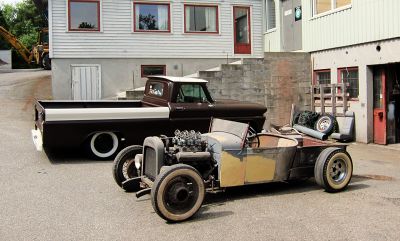 As it appeared in July 2012. Photo by Olav Kvipt 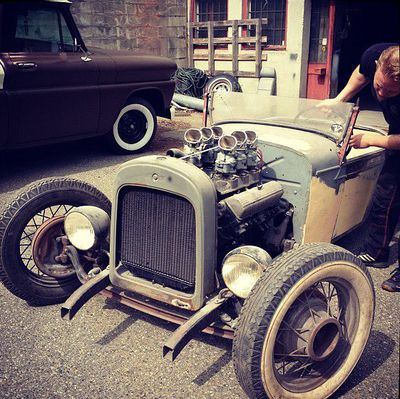 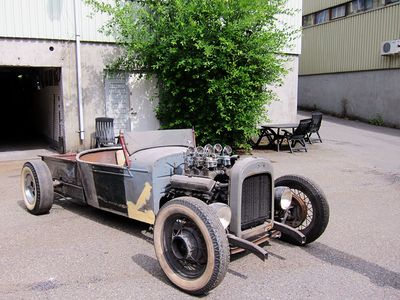 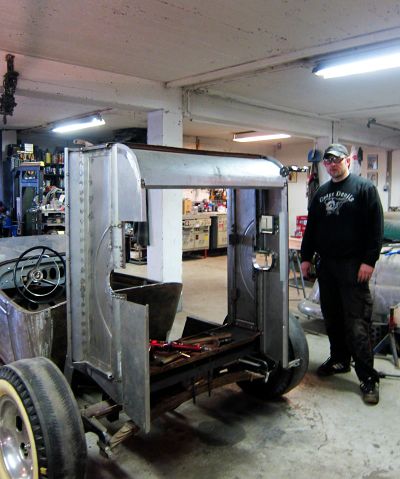 Working on the bed. Photo by Olav Kvipt 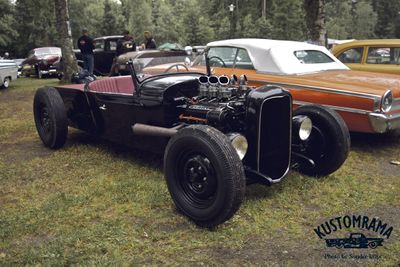 1926 Chevrolet Roadster Pickup owned and built by Coupe Devils member Kjetil Kvipt of Fyresdal, Telemark, Norway. The pickup bucket changed hands several times before Kjetil got aquired it and began building a car around it. A set of Model A frame rails were constructed, featuring a 1932 Ford axle which was dropped by Tobias Andersson of Jokers. The front end is a chapter of its own, a set of Model A 18 inch wheels were adapted to a modified set of 1955 Cadillac brake drums, along with 1955 Cadillac spindles that fit right on the '32 Ford axle. The leaf spring was from a Model A, along with the split wishbones which was installed by using 1954 Ford F-100 mounts. The steering box is from a unknown english car, while the steering shaft was constructed by Kjetil with Dodge parts. Kjetil constructed the bed by himself by using sheet stock. The tailgate hails from a Model A. Kjetil purchased a rusty old 1955 Cadillac Limousine which he could use vitale parts from. The floor was used from the Cadillac, along with the 331 cui engine, rear axle and brakes. Hans Ola gave him a set of 1947 Buick instruments that Kjetil installed in the 1926 Chevrolet dash. The headlights once came from a Volvo truck, installed on modified brackets. Kjetil is not sure of whether he should use the Chevrolet grille shell, a 1932 Ford grille or Model A yet, but the radiator itself is a Mustang six cylinder unit.[1]

Please get in touch with us at mail@kustomrama.com if you have additional information or photos to share about Kjetil Kvipt's 1926 Chevrolet.