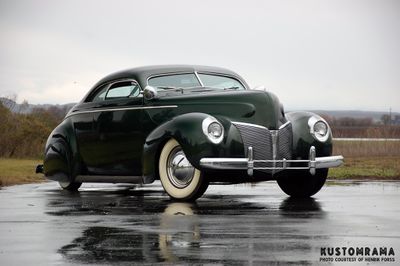 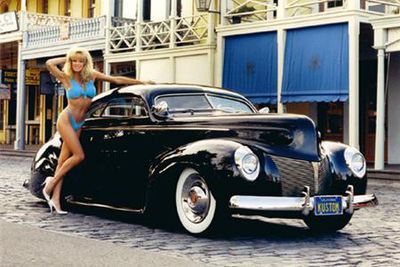 Kevan first fell in love with Mercury customs after seeing John D'Agostino's Stardust in the late 1980s. It was through the Stardust that Kevan found out about the Matranga Mercury. After that he always wanted a 1940 Mercury. 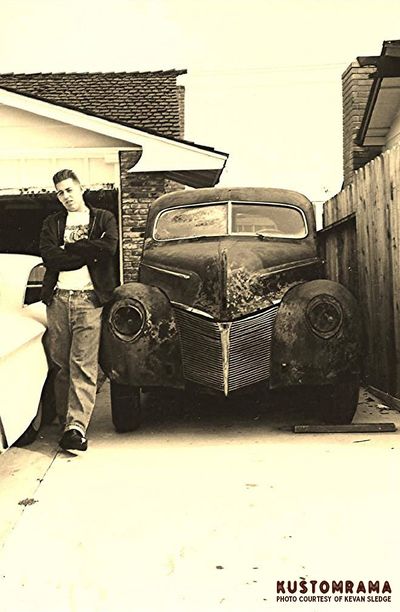 A photo of Kevan with his first 1940 Mercury in 1993. He ended up selling the car to Vic Jimenez so he could finance a 29 roadster build. Photo courtesy of Kevan Sledge. 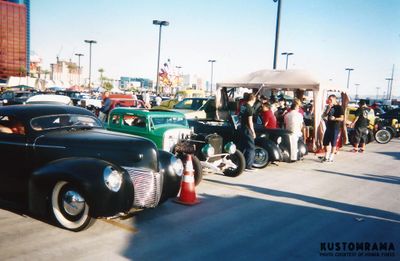 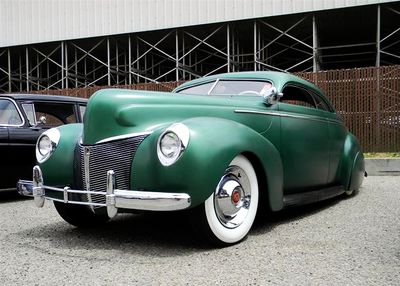 The Merc as it appeared after it received a flattened green basecoat paint job around 2008/2009. This version was dressed up featuring 1947 Cadillac Sombreros. Photo by Kevan Sledge. 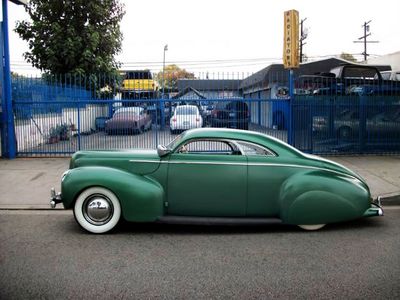 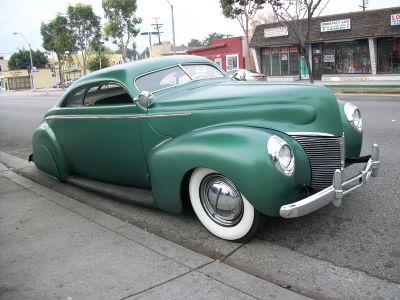 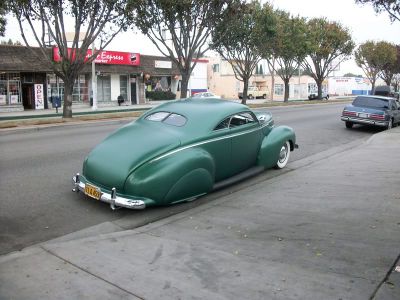 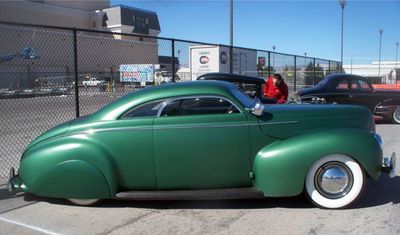 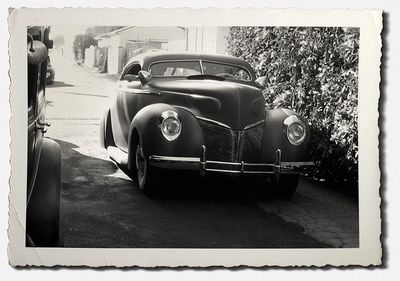 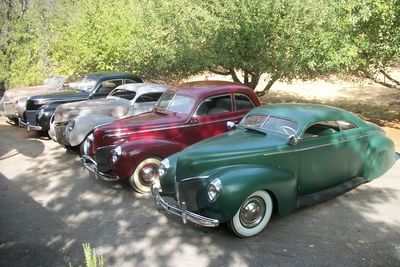 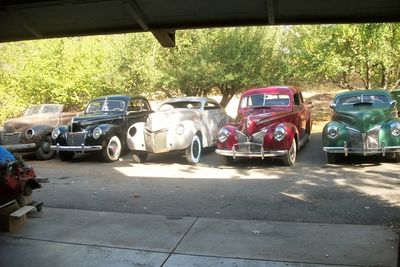 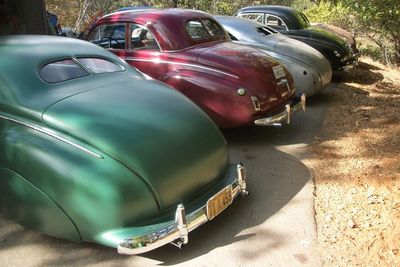 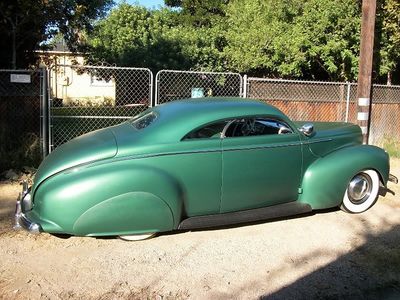 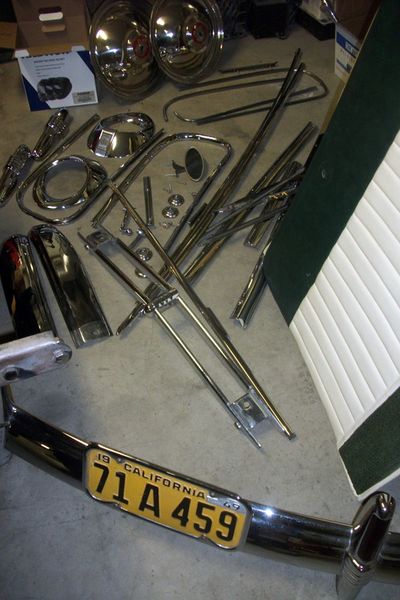 Autumn of 2012 Kevan tore the car apart to finally give it a glossy paint job. Photo by Kevan Sledge. 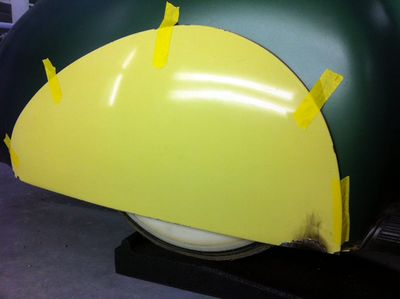 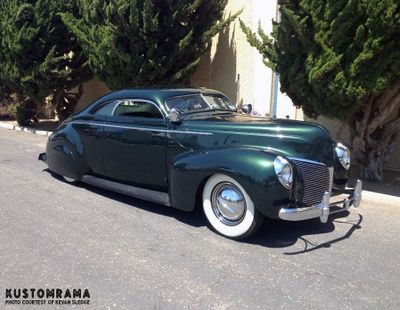 The final version of Kevan's Mercury made its debut at the 2014 Cruisin' Nationals in Santa Maria. It won the Early Customs Award at the show. Photo by Kevan Sledge. 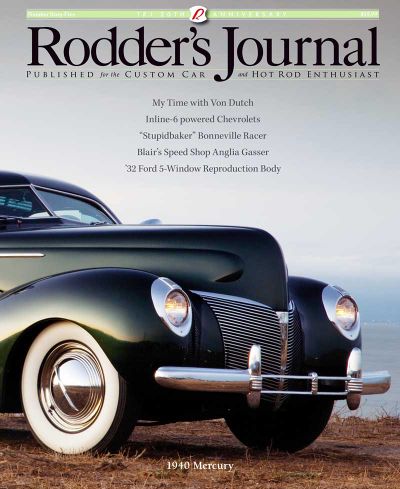 Kevan's Merc was featured on the cover of the subscriber issue of The Rodder's Journal Number 65. 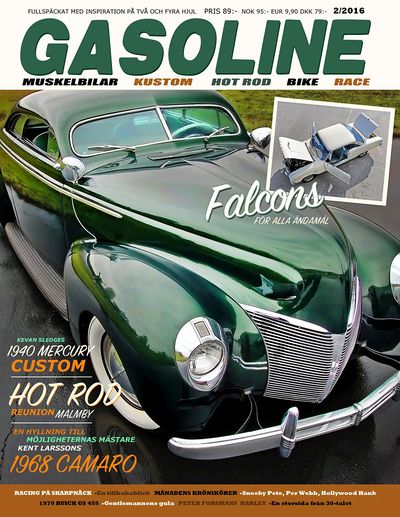 Kevan's Mercury on the cover of Gasoline Magazine Number 2 2016. 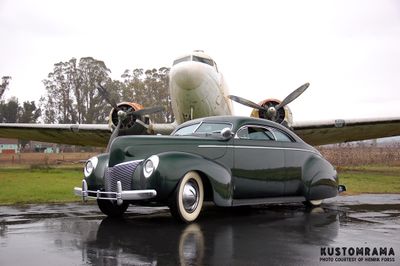 A photo of Kevan's Mercury taken during the Gasoline Magazine photo shoot. Photo by Henrik Forss. 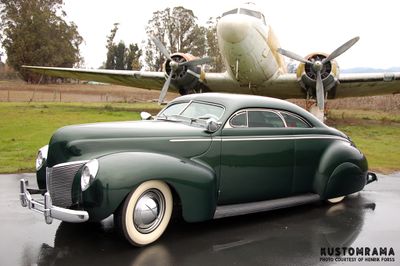 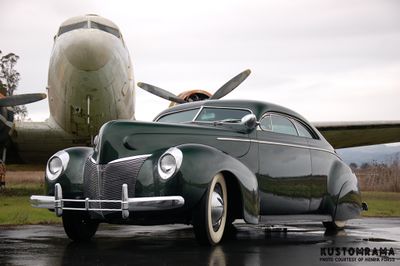 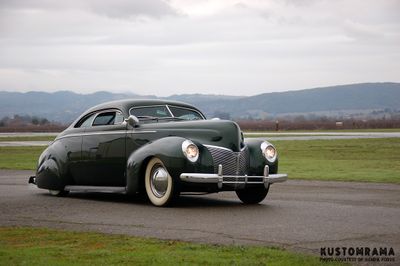 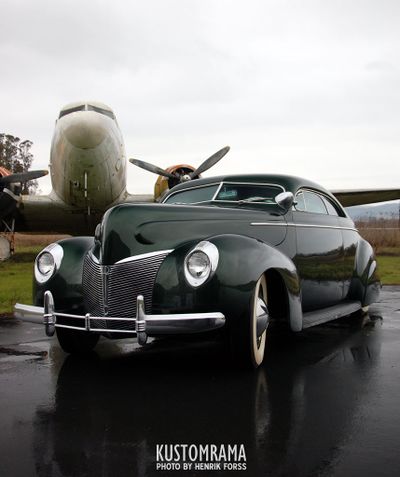 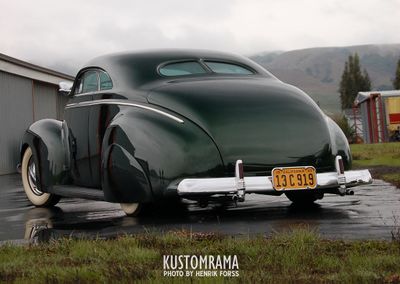 1940 Mercury coupe owned and restyled by Shifters of So. Cal. car club member Kevan Sledge. Kevan bought the Mercury from Rudy Rodriguez, after selling a 1939 Ford coupe. Kevan first fell in love with Mercury customs after seeing John D'Agostino's Stardust in the late 1980s. It was through the Stardust that Kevan found out about the Matranga Mercury. After that he always wanted a 1940 Mercury. According to the Rodder's Journal Number 65, Kevan bought his first Mercury in 1992. He didn't do much with it, and ended up selling it to fellow Shifters member Vic Jimenez.[1]

It was Vic who in 2002 talked Kevan into checking out Rudy's Mercury. The car was in a nice original condition, and he ended up buying it in September the same year. At the time Kevan was living in Orange, California. The car was brought to Anthony Castaneda's place, where Anthony did the brakes while Kevan messed with the motor. A Magnum three-inch dropped axle was installed up front, while the rear was lowered by flattening the rear crossmember.[1] After Kevan and Anthony had gotten the car back on the road, Kevan continued the build by repairing rust and replacing bad body panels. When the body was repaired, it was finally time for a haircut. Vic helped Kevan during the chop. 6 inches were cut out of the A-pillars, while 7 inches were removed from the c-pillars. The A-pillars required cuts top and bottom, and the bottom of the pillars needed to be slightly leaned back to line up. After Kevan got the A-pillars set, he began reshaping the C-pillars to achieve a better flow. He cut out the back window, leaving about 3" all the way around so there would be plenty of meat to work with. The crown above the back window was softened, and the flow of the C-pillar was rendered with cutting slices right in the heavily curved area. The sail panels were re-shaped to add more length to the roof, and the B-pillars were removed for a hardtop roofline, similar to the Matranga and the Stardust Mercury. After the roof was fully tacked in place, the drip rails were shaved.[2] With the roof tacked back together, Kevan drove the Merc to the Hot Rod Reunion in Bakersfield a few weeks later. The back half of the roof was in bare metal, while the rest of the car wore the weathered blue re-paint that was on it when he bought it.[1]

After the top was chopped, the car continued evolving over the next few years. It was nosed, decked and shaved for door handles. The side trim on the hood was shortened, and the rear fenders were molded to the body for a cleaner appearance. Robert A. Radcliffe III molded the fenders for Kevan. The gas filler was also relocated inside the trunk. The in-progress custom appeared in shows all over California, featuring various stages of paint, primer and bare metal. When the bodywork was done, the car was painted flat black. Later on Kevan built a custom splash pan which was made to fit a 1946 Ford bumper, and the taillights were removed, and relocated in the bumper guards. Up front, a 1941 Lincoln Zephyr bumper was installed. This version sported a set of 1947 Cadillac Sombreros, which were 16" and super rare since they only came on series 75 Caddy Limos and ambulances. Kevan looked for 4 years before he found a good pair! The 16's are deeper and stick out slightly more so the 40 Merc spindle isn't a problem. He installed them by using 1940 Ford beauty rings, and used a resin to attach the two.[2]

In 2004 Kevan installed a 1947 Mercury 59A flathead engine in the car. The engine came from a 1932 Ford that was built in the 1950s. Tom Hutchinson went over the engine, boring it .030-over and installing a Winfield cam, Johnson adjustable lifters, polished Sharp heads, and a Thickstun high-rise intake with two Stromberg 97s. The rest of the drivetrain was kept stock.[1]

When Kevan and Vic first chopped the top on the Merc, they overlooked the height of the windshield, so in 2008 Kevan decided to raise the windshield 1 5/8" up into the roof. In 2013 Kevan told Kustomrama that "It's easier to do this step first, that way you don't have to add a filler piece to the A-pillar later. By raising the windshield, you remove the "forehead" above the windshield, making the front window even with the side windows." Around the same time, Kevan decided to clean the car up, so he could show it at the following year's Sacramento Autorama's celebration of Mercury's 70th anniversary. He had about 6 months to get the car ready for the show. Before the show, the Merc received a flattened green basecoat. Inside, the stock seats were lowered before Daniel at Precision Upholstery spent a week and a half in Kevan's home garage stitching a two-tone dark green and off-white Naugahyde tick-n-roll interior. Rolling on 600-16 Lester 3 7/8" Whitewall Tires, it was dressed up with Appleton spotlights, National Hollywood flipper hubcaps and beauty rings. The Sacramento Autorama lit the fire for Kevan to finish the build, so shortly after the show he had the rest of the interior and trunk upholstered in two-tone tuck-n-roll. Chris Johnson at Johnson's Kustom Upholstery trimmed the trunk and spare tire cover.[1]

In 2011 Kevan moved to Auburn, California, bringing the Mercury along. In 2012 the car came apart once more, and Octavio Chavez began preparing it for its final coat of paint. Charlie Pascuzzi handled most of the block sanding, while Jason Haskin went over it one last time before it was delivered to Bill and Dave Wolcik at Edward's Collision Studio in Rocklin, California. The Wolcik's and Jason Haskin laid down a custom mixed Dark Organic Green paint job.[1] The build was completed in May of 2014, making it's debut at the 2014 Cruisin' Nationals in Santa Maria. It won the Early Customs Award at the show. The same year it featured on the cover of The Rodder's Journal Number 65.[2] In 2015 it landed the cover of Kustoms Illustrated Issue 43, and in 2016 it did also make an appearance on the cover of Gasoline Magazine Number 2 2016, a Swedish magazine.

Sold at the 2018 Barrett-Jackson Scottsdale Auction

In January of 2018, Kevan's Mercury was offered for sale at the 2018 Barrett-Jackson Scottsdale Auction. It was advertised without a reserve, and it sold for $82,500.00. The highest bidder was David Kimmerle of Glendale, Arizona. Kimmerle runs Sanderson Ford, a Ford Dealership in Glendale, and he has a museum at the dealership where the car is displayed.[3]

Please get in touch with us at mail@kustomrama.com if you have additional information or photos to share about Kevan Sledge's 1940 Mercury.