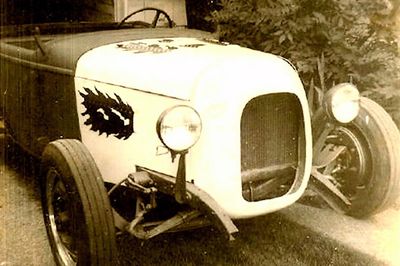 The car as it looked when Jerry Sprague bought it. 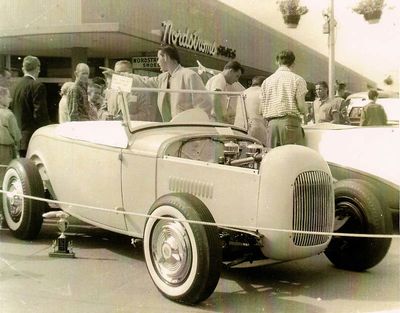 The car as it looked after Jerry had restyled for the first time. 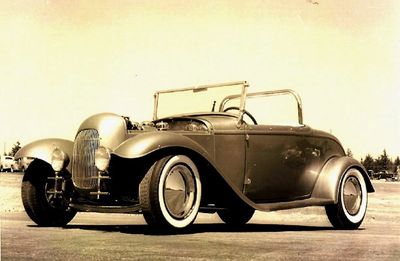 The car as it looked after Keith Treece restyled it. 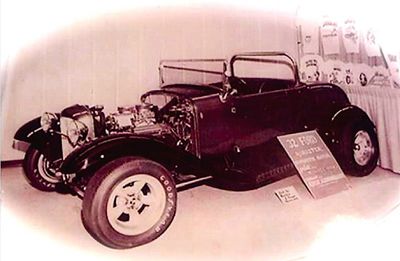 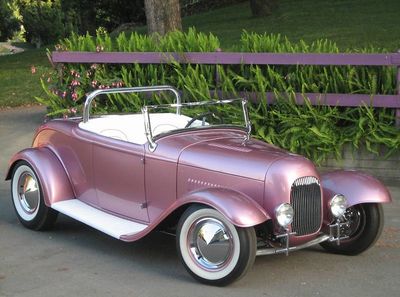 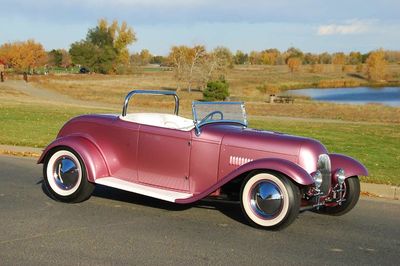 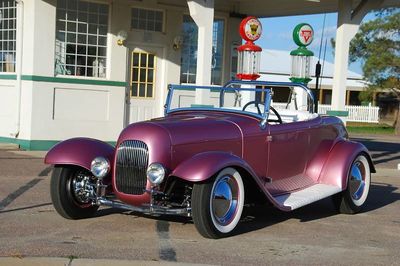 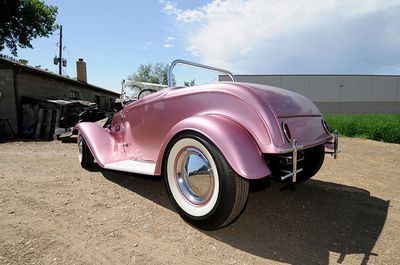 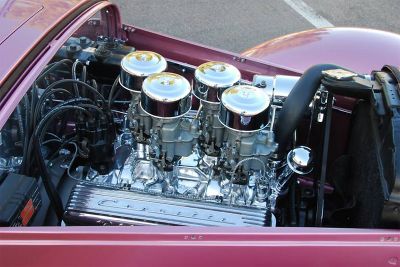 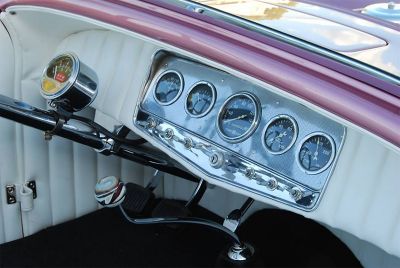 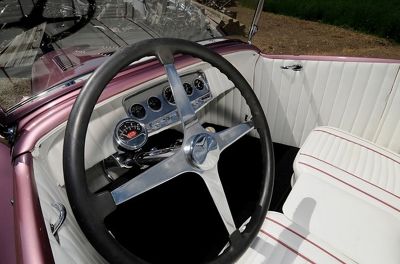 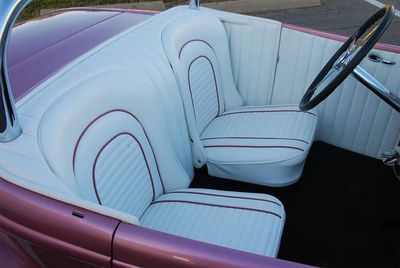 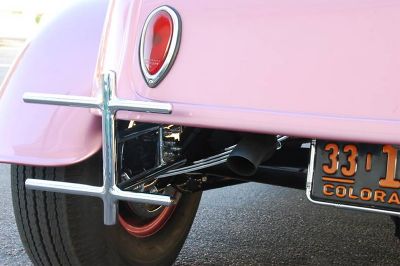 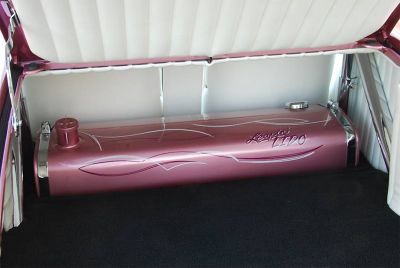 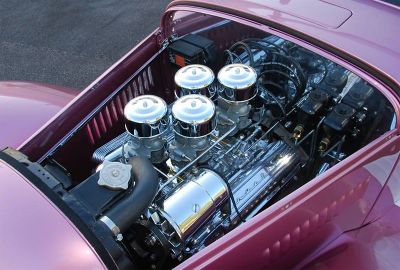 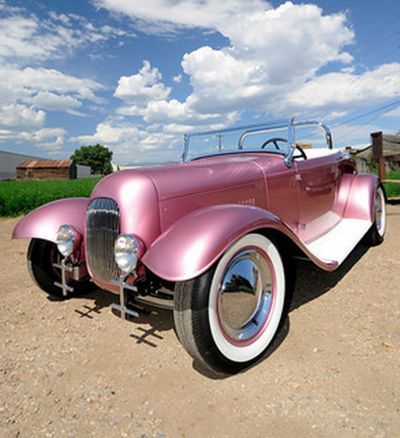 1932 Ford roadster originally hot rodded in Los Angeles, California in 1948. The car was channeled, featured an open-wheel carm, 1932 Auburn dash and it was already sporting the aluminum track-nose along with a souped up Flathead and hand painted flames. The track nose, hood, and louvered sides were built by Art Ingalls of Los Angeles. Grinders member Jerry Sprague of Seattle, Washington bought the roadster in 1956. Jerry and fellow club members bobbed the frame horns, inserted a custom grille in the track nose and painted it light blue.[1] Jerry added a set of Oldsmobile Fiesta hubcaps as well.

About a year later, Sprague sold it to Keith Treece,a fellow Grinders member. Keith did all of the bodywork in his own driveway. He restyled the roadster by installing an aluminum firewall and floorboards. A chrome generator, polished fuel lines, chrome brackets, and a polished dressed the aluminum firewall up. Bobbed fenders and handmade running boards were fit to the body. Nerf bars were installed both rear and aft. Treece also filled the seams, and shaved the handles. The Flathead was pulled out and swapped for a 1955 Chevrolet Corvette 265cid OHV bored up to 283cid. The engine was balanced and rebuilt, it was fit with a pair of ported 1958 Chevrolet Corvette FI headers, a Duntov solid lifter cam, and a polished Weiand manifold fit with four Holley 94 two-barrel carburetors. A 1939 Ford three-speed transmission and rear end was installed. A shortened 1948 Ford driveshaft spun the 4.11 gears placed in the 1939 Ford rear end. The interior was re-upholstered in white by Acme Upholstery in Seattle. A pair of MG buckets were used to stitch the chalk white tuck 'n' roll with lavender piping around. The carpet was black. The Auburn dashboard was fit with curved-glass Stewart-Warner gauges and a Sun tach. The interior was topped off with a 17-inch Bell steering wheel. A Corvette-style rear deck panel was finished with a chromed rollbar. Finally the body was painted 1959 Buick Lido Lavender by Bob Ellis. The Fiesta hubcaps were swapped in favor of large smooth hubcaps mounted on 1956 Ford pickup rims. The car was driven daily and often displayed in northwest car shows, with great success. The finished roadster caught a lot of attention, several magazines, including Hot Rod Magazine and Car Craft featured this version of the car.[1]

Keith passed the roadster on to Rick Rennebohm who redid the whole car by fitting in to the trends of the late sixties and early seventies. The track nose was replaced by modified 1932 Ford grille shelle, the Nerf bars were removed and a dropped headlight bar was added. The engine was fit with a tunnel ram with four-barrel carburetors. The white interior was re-done with black Mar-Hyde dye and fit with a 14 inch Cal Custom steering wheel. The body was painted in Candy Apple burgundy with black fenders. To finish off the style, five-spoke American Racing wheels were added.[1]

The car was used until 1974. In 1974 Rick put the car in storage. It remained in storage until Greg McComas of Loveland, Colorado bought it in 2004. Greg wanted to build himself a Bonneville styled 1932 Ford Coupe that was channeled and fit with a track nose. He searched around eBay where he found a track-nose complete with grille, hood, and side panels with hand-punched louvers. Greg's bid was too low and he lost the auction. The assembly ended up in Maine. Greg mailed the buyer and expressed his interest in case he ever wanted to sell it. About a year later, the buyer contacted Greg. His plans had changed and the nose was up for sale. Greg bought the parts immediately.[1]

After a year of head-scratching, Greg decided that the coupe and the nose were not a match. The front ended up back on eBay once again. Mail's were popping into Greg's inbox, including one from Rick Rennebohm. The mail went: "I bought this car from Keith Treece in the Sixties and it has not seen daylight for many years. If you want information and the hot rod history, you can call me." Instead of selling the track-nose, Greg bought the car. He knew this was an old hot rod which deserved to be restored back to its magazine-feature condition. Careful attention to period correctness was foremost during the restoration, and prior owners provided memories, photos, and technical tips.[1]

Approximately 98 percent of the roadster's original hot rod parts were recovered, rebuilt, refinished, rechromed, and reused for this restoration. Greg felt the car and its parts came to him in need of a restoration. The buildup took two years, but the project-including research and locating the original parts took six years. Gary Vahling and his crew at Rocky Mountain Street Rods in Arvada, Colorado, assisted with the restoration. At home, Greg got help from his wife Anita, son Gunnar, and daughter Cayley.[1]

The drivetrain was completely rebuilt and maintained back to the original specs. Block Shop in Denver machined the 1955 Chevrolet OHV engine and Lynn Newkirk of Arvada, Colorado reassembled it. Josh Bjorgo at Rocky Mountain Street Rods bent the exhaust pipes, feeding exhaust from the 1958 Chevrolet ram's-horn manifolds to Smitty mufflers. Ted Bowen from Denver assembled the 1939 Ford three-speed, matched to a stock clutch and shifter. A shortened 1948 Ford driveshaft spins the 4.11 gears in the 1939 Ford rearend. Greg decided to use the 1956 Ford pickup rims which measure 15x6, roll on 5.90x15 and 7.60x15. BFGoodrich Silvertone bias-ply whitewalls made it look just like the rolling stock of the early Sixties.[1]

Josh Bjorgo at Rocky Mountain Street Rods got the body back into shape and re-fit the aluminum track-nose assembly. The King Bee headlights and 1939 Ford taillights were retained from the original buildup. Fred Herring at Creative Visions in Thornton, Colorado, mixed and shot DuPont paint to recreate Bob Ellis' 1959 Buick Lido Lavender paint job. The chalk white upholstery was redone by Jay Schluter at Pjays Upholstery in Denver. The door panels and running boards were upholstered as well. Black loop carpeting is just like it was. Josh Salter at Rocky Mountain Street Rods routed the wiring.[1]

The original 1932 Ford frame has been reinforced with a tubular K-member. The suspension is simple traditional hot rod stuff, including the 4-inch dropped solid axle which possibly is a vintage Dago axle with 1940 Ford spindles and brakes, split 1936 Ford wishbones, and stock spring and shocks in front. At the other end, a rear crossmember was added to fit the Model A buggy spring. The 1939 Ford rear hangs on shortened ladder bars with tubular shocks. Brakes and axles are stock.[1]

Please get in touch with us at mail@kustomrama.com if you have additional information or photos to share about Jerry Sprague's 1932 Ford.