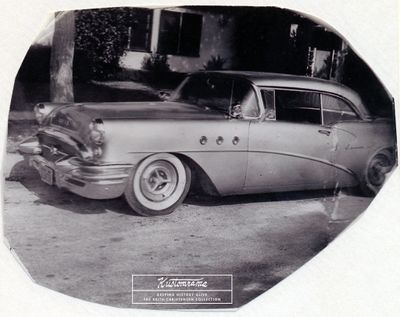 An early photo of Keith's Buick. Keith bought the Buick late in 1954, and it was his first new car. "Polar white and beautiful dark green leather inside. I drove a 1950 Olds 88" before that. It was SUPER fast, but not enough design with all of the new cars out on the market." Photo courtesy of Keith Christensen. 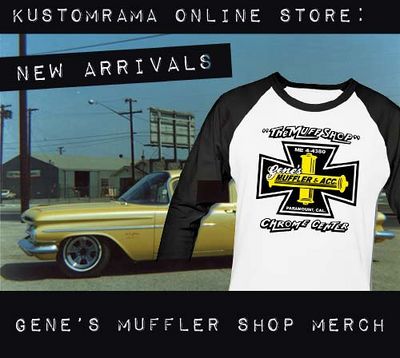 1955 Buick owned by Keith Christensen of Norwalk, California. Keith bought the Buick late in 1954, and it was his first new car. "Polar white and beautiful dark green leather inside. I drove a 1950 Olds 88" before that. It was SUPER fast, but not enough design with all of the new cars out on the market." When Keith pulled into Dutch's shop he saw it and said "Keith, pull it inside the shop, I have a great idea!" "Not knowing what he had in mind and too scared to ask, I pulled it in. "He said those portholes on the side are super cool!" They were the first of the perfectly round portholes. I stood back and he started masking and taping down both sides. There sat my beautiful, NEW Buick, all stock, not customized, yet and at his mercy! Boy, I was scared! He got a small airbrush and proceeded to paint bright "RED" flames coming out of the portholes and running down the sides to the front doors. He was super happy! He said, "They look great. They just fit" I stood there grinning and agreeing with him. I was stunned when he said, "Hey Keith, it's on the house, I've been wanting to do one ever since I saw them." Well, I drove home and into the reality of, "what will my folks say?" I was only 17 and they had cosigned on the car. I hid it around the corner in a friend's driveway. I told my folks a fib, that it was being tuned. I finally brought it home and they were much better about it than I thought. They were so interested in my endeavors, that it was accepted. One solace was, I had started the Coachmen car club at my house a year earlier and when the members saw it they couldn't say enough good about it!! That was in 1954 and it was such a new world of customizing cars, that this just re-enforced the desire to make an outstanding car out of whatever you drove and that was just the beginning of my building that Buick into a real custom car."[1]

Keith had George Barris lower his Buick, as George and his brother Sam had their shop right down the road from Von Dutch. According to Keith; "Sam was the master builder and George was the frontman."[1]

Please get in touch with us at mail@kustomrama.com if you have additional information or photos to share about Keith Christensen's 1955 Buick.