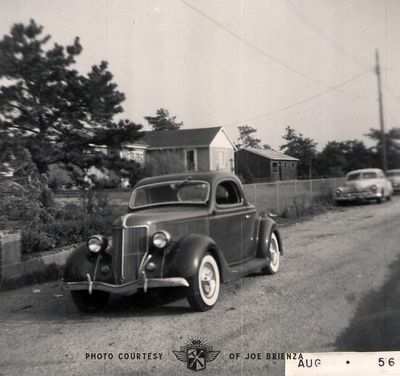 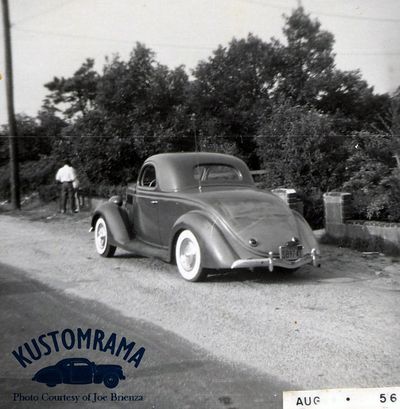 1936 Ford 3-Window coupe owned and built by Joe Brienza of West Islip, New York. Joe traded the coupe even for a customized 1949 Mercury in 1956. At the same time, Joe also sold his first hot rod, a 1929 Ford Model A Coupe. The Model A was powered by a 1951 Cadillac engine, so he decided to sell it without the engine. He took the '36 home, and instantly pulled out the flathead, so he could install the bigger Cadillac engine. A Lincoln side shift tranny and a 2 speed Columbia rear end was installed as well. The engine was dressed up featuring two 4-barrel carbs on an Offenhauser manifold, a Crane Cam and a Spalding Flame Thrower distributor. Two Sandy mufflers were installed, as Joe thought they sounded better than the Smittys. The taillights were shaved from the rear fenders, along with the spare rear tire on the deck lid, and newer Pontiac taillights were integrated into the pan under the deck lid. Joe did all of the bodywork on the coupe, before he gave it a white paint job with mild pinstriping. The grille was painted red, and the hood was louvered. Joe remembers paying 10 cents a louver. The interrior was done in white and red rolls and pleats upholstery by Baldwin Auto Upholstery. Oldsmobile Fiesta hubcaps were installed for a custom look. The build was completed in 1956.[1]

Please get in touch with us at mail@kustomrama.com if you have additional information or photos to share about Joe Brienza's 1936 Ford.