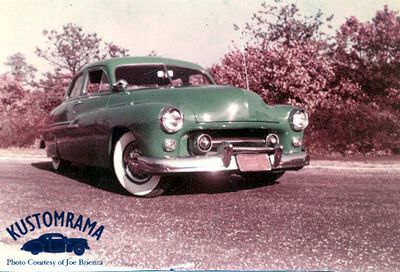 A photo of the Turquoise version of Joe's Mercury. This version featured a shaved hood, hooded headlights and a 1951 Ford grille. Photo from the Joe Brienza Photo Collection.

1949 Mercury owned and restyled by Joe Brienza of West Islip, New York. Joe bought the Mercury in 1951, and it didn't take long time before before pulled out the stock flathead engine and installed a bigger 1948 Cadillac mill in it. He kept the original drivetrain. It ran good, but it was too heavy, so 6 months later he put a 1950 Oldsmobile engine with an automatic transmission in it. Joe remembers that that combination ran very good. The Merc went trough many stages. It was first black, then turquoise blue. Later on Joe painted it two-tone. He changed the grille two times. In the beginning he ran a 1951 Ford grille. That grille was later replaced with an Oldsmobile grille. In 1956 Joe traded the Merc even for a 1936 Ford 3-Window Coupe.[1]

Please get in touch with us at mail@kustomrama.com if you have additional information or photos to share about Joe Brienza's 1949 Mercury.