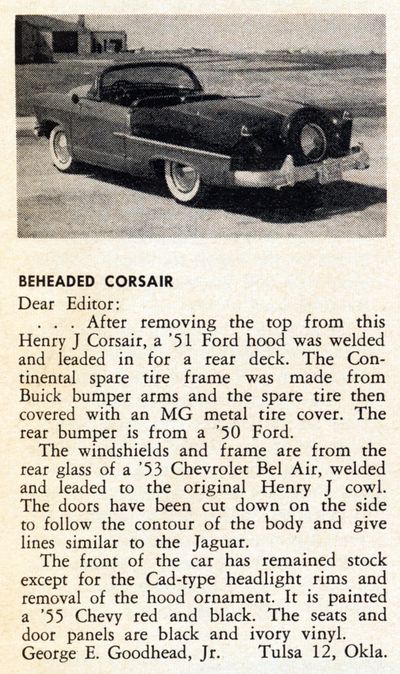 A photo of George's car and a letter from George was published in Motor Trend July 1956. Photo courtesy of Motor Trend.

1951 Henry J Corsair convertible owned by George E. Goodhead, Jr. of Tulsa, Oklahoma. In 1956 a photo of George's car and a letter from George was published in Motor Trend July 1956. According to the letter, George had cut the roof off the car. After the top had been removed, a 1951 Ford hood was welded and leaded in for a rear deck. A continental frame tire frame was made from Buick bumper arms before the spare tire was covered with an MG metal tire cover. A rear bumper from a 1950 Ford was installed to protect the modified rear end. The windshield and frame on the car was a 1953 Chevrolet Bel Air rear window, and the doors had been cut down to follow the contour of the body and give lines similar to the Jaguar. The front of the car remained stock, except for Cadillac type headlights and removal of the hood ornament. It was completed in a 1955 Chevrolet red and black. The seats and door panels were black and ivory vinyl.[1]

Please get in touch with us at mail@kustomrama.com if you have additional information or photos to share about George E. Goodhead, Jr.'s 1951 Henry J.