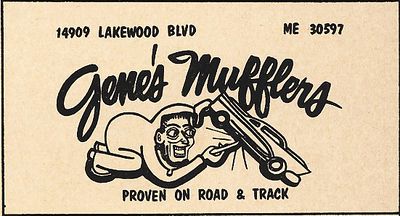 An ad for Gene's Mufflers from the 1958 Renegades Rod & Custom Motorama Souvenir Program. Gene Moore was the owner of the shop at the time. 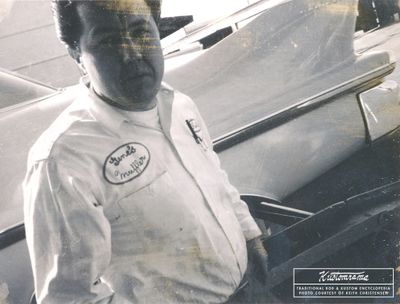 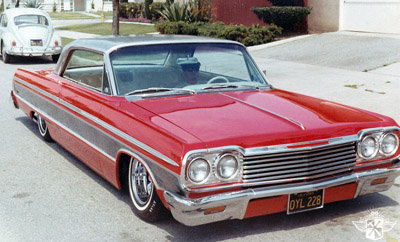 Gene's Mufflers was run and operated by Gene Moore. The shop was located at 14909 Lakewood Blvd.

If you ever want to sell, let me know

In 1958 Keith Christensen of Norwalk, California told Moore that he was interested in buying his booming business. In 2016 Christensen told Sondre Kvipt of Kustomrama that he just had gotten married. He was in college and worked at a Supermarket; "I took my bosses 1956 Ford truck and my 1955 Ford truck to a tiny shop where my younger brother started working. Aman in the Jr Chamber, who sponsored the Coachmen car club, had a muffler shop in Norwalk. A short distance by the way from where Sam Barris lived. He gave my younger brother a job sweeping and cleaning his muffler shop, called Sport Muffler. My brother learned the muffler trade and in my getting acquainted with Gene, I got him a job there. It was called Gene's Muffler. Located on the border of Paramount and Bellflower, the shop was an old real estate office and a two-car garage that Gene had put a pit with a couple of racks in between. Coming into that little shop, I noticed Gene was doing great and I told him if he ever wanted to sell the shop let me know. He was driving a fairly new 1956 Ford pickup, had a wild ski boat and a new car for his wife. Not bad for a young man!"[1]

Keith Christensen buys the shop and expands it

Later on, Gene got in trouble with the sales tax department and needed money. "I hocked everything and paid $3,500.00 for the shop," Christensen told Kustomrama. "The name had a good reputation so I just kept it. Later I bought the land next door and built a very large muffler shop that could do 6 cars at a time. In the front building, I put a tire and wheel company and a small manufacturing building in between. It did great so I put shops in Downey and Hollydale, two cities nearby. We did all of the lowering and lifting of cars and installed dual exhaust on thousands of cars over that period. In his youth, without a beard or styled hair, Larry Watson moved into a building directly across the shop area from my original muffler, customizing shop. There he took on his aura of beard and styled hair," Christensen recalled.[1]

Keith started building driveshaft tips and bed rail pipes. He developed a manufacturing division, and after seeing how lifted cars were dragging up driveways, he got the idea to put a 90-degree elbow pipe on the front of his driveshaft tips; "I chromed the whole thing, that let us put them on the outside of the fenders, just behind the tires. Since I was next to the town of Bellflower, where I lived, I called them Bellflower Chrome Tips! The name stuck with them to this day," Keith told Sondre.[1]

In 1963 Tom Kelly designed a logo for Keith. "Tom specialized in large murals and pinstriping on motorhomes and big trucks." He designed a logo containing two glass packs crossing inside an Iron cross, and Keith had it made into decals, jackets, and shirts. He also painted it on the doors of some of his shop trucks.[1]

Please get in touch with us at mail@kustomrama.com if you have additional information or photos to share about Gene's Mufflers.