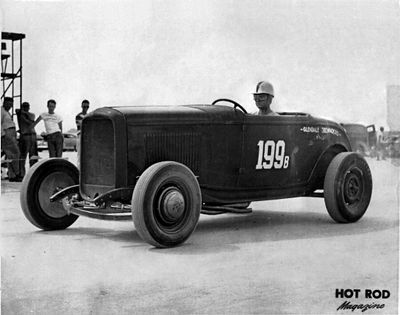 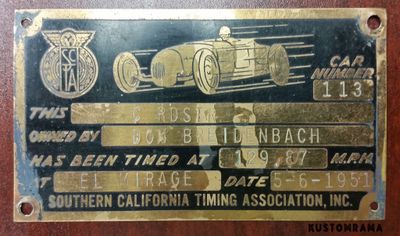 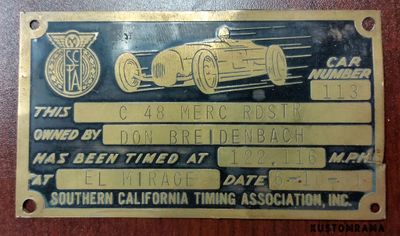 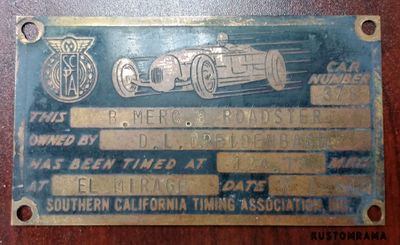 Donald L. Breidenbach was a member of the Glendale Sidewinders hot rod club. In 1947, at the age of 17, Don started a business bulinding custom carburetor linkage in his mother's garage, selling them in Hot Rod Magazine. The sales helped fund his 1932 Ford Roadster.[1]

Having participated from 1947 to 1951 at El Mirage, reaching a top speed of 129.87 mph, the dream of racing on Utah’s Bonneville Salt Flats became his next goal. Life got in the way of his dreams, having a young wife and 5 children at home, Bonneville was kept on wait until 2010.[1]

In 2010 Donf ound himself at home watching the movie, “The World’s Fastest Indian.” This is the story of New Zealander, Burt Munro, who spent years building a 1920 Indian motorcycle – a bike which helped him set the land speed world record at Bonneville in 1967. During one of the scenes, Don saw a bold aircraft belly tank speedster driven by a dear friend, Bill Phy from his early racing days driving in the background. Memories raced back into his mind. In 1956 Don had loaned the engine from his Deuce Roadster to his friend because his wife was expecting their third child and racing was put on hold for the rest of the year.[1]

Don wasn’t one for being idle, for letting life just pass him by and he remembered everything. The sight of his friend from 55 years earlier and the belly tanker brought tears to Don’s eyes, but the sight also rekindled the dream to drive again at Bonneville. He spent months researching his actual goal and the vehicle to reach that goal. Having just celebrated his 80th birthday, the dream had matured. Don not only wanted to drive on the salt again, he wanted to drive over 200 mph.[1]

Don selected a 2009 Nissan GT-R with racing provenance for the project. Work began preparing her for the salt experience – safety items, different transmission gears, turbos, wheels and tires. The car, named Serenity, made its maiden voyage at El Mirage in 2013, driven by Bill Guzenski. Don made his maiden run at Mojave Mile in May of 2014. In anticipation of running at Bonneville, Don participated in events at El Mirage where he gained the necessary experience to run off-road. In August Don and his team made the trek to Bonneville for one week of racing. Mother Nature took a turn and after flash flooding, the SCTA Bonneville Speed Week was canceled.[1]

But as always, patience and persistence paid off. September’s event, hosted by the Utah Salt Flats Racing Association, offered an opportunity to take Serenity out onto the salt. 66 years after starting out with his Deuce Roadster, Don successfully made 5 passes over 200 mph. Don was looking forward to a full season in 2015, especially the 2015 SCTA Bonneville Speed Week. This was not to be. Don became ill in January and passed away March 5, surrounded by his family.[1]

Please get in touch with us at mail@kustomrama.com if you have additional information or photos to share about Don L. Breidenbach.