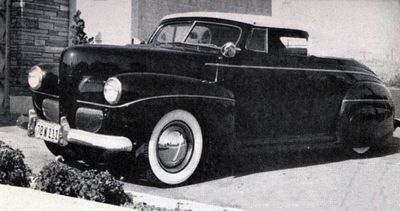 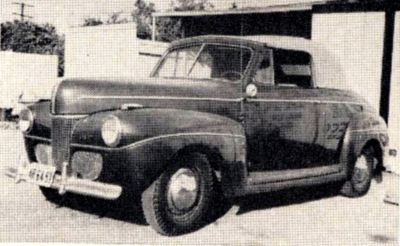 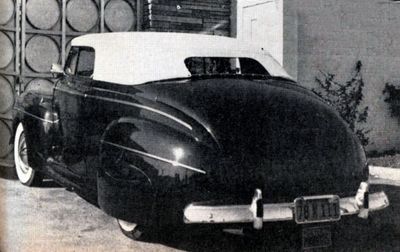 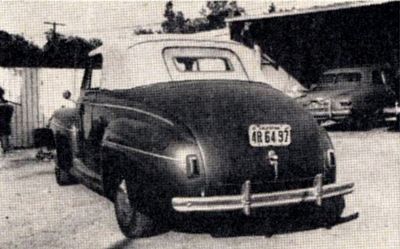 1941 Ford Convertible restyled by Barris Kustoms for Kustoms of Los Angeles member Dick Carter of Bell, California. After Dick had seen Var Martin's 1941 Buick, he had a vision of a dream car and fantasized about building it. Dick and Jesse Lopez were good friends and after buying a 1941 Ford each they brought their Fords to Barris Kustoms in 1948 for a makeover. Sam Barris chopped the top 5 1/2 inches, while George Barris took care of channeling the body and C'ing the frame. The car was lowered 8 inches in the back and 3 1/2 in the front. As a typical trademark, Barris shortened the side trim on the hood. The gravel pan was molded and all the chrome on the deck lid and hood were removed for a cleaner appearance. The hood was peaked and the center grille was filled in with sheet metal. The door handles were removed and electric door locks were installed. The push buttons were placed on the running boards. 1946 Ford bumpers were installed and taillights made out of red lucite were inserted into the bumper guards. George showed Dick how to make the taillight lenses by gluing together sheets of red lucite before shaping them and etching the backside with a hacksaw and files. Dick also made the knobs for the radio and a red Lucite panel for the dash. Dual spotlights, Flipper Hubcaps and fender skirts were added. Having a tight budget, Dick sanded the car himself in order to save money. George Barris painted the car in a deep red maroon metallic with gold fleck in it. Barris charged $800 for body and paint. Gaylord's Kustom Shop upholstered the interior in white and red piping for a cost of $150, he also made a padded top for the car. However, according to Trend Book 101 Custom Cars, it was installed by Chavez American Auto Tops for $185. The dashboard was chromed and the bulbs were dipped in blue paint. After about a year's work, Dick and Jesse could hit the streets with their rides. Dick's Ford was less radical and was finished first.[1]

After saving up money, Dick had Fritz Voigt rebuild the engine. Fritz bored the engine and fit it with milled heads and dual carburetors. After a couple of years, the Ford was sold to a fellow from Paramount, California. Dick used the money to go to college.[1]

Please get in touch with us at mail@kustomrama.com if you have additional information or photos to share about Dick Carter's 1941 Ford.