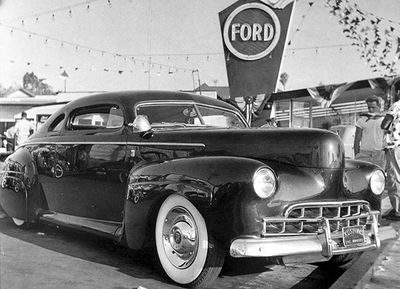 Jesse Lopez worked at a parts store where they sold Du Point paint. While working there Jesse were experimenting with the paint trying to achieve a Candy Apple effect.[1]

In 1948 Jesse met George and Sam Barris at the first Hot Rod Exposition held at the Los Angeles Armory. They became friends, and Jesse started to hang out at Barris Kustoms. After returning from the Korean War, Jesse started to work for Barris Kustoms doing his share fair of painting. When he had the time, Jesse would try different combinations of clear and toner. When he sprayed they would either be muddy or blush out. One day he tried a real thick toner, No. 53D. According to Jesse it was almost like honey. It was so thick that he didn't bother with it and tried it, and it worked. Jesse used the new formula on his own brand new 1958 Ford Thunderbird. The car had only minor modifications, and Jesse admits that it was a rushed job to get it out on the streets. The Candy Red paint made an instant hit, and Jesse sold the formula to George Barris so that he could package it and sell it as Kandy Lak.[1]

Please get in touch with us at mail@kustomrama.com if you have additional information or photos to share about Jesse Lopez.