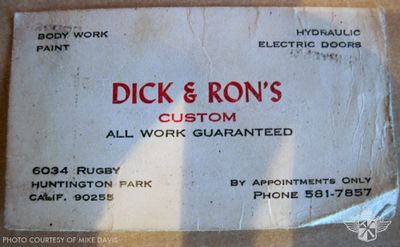 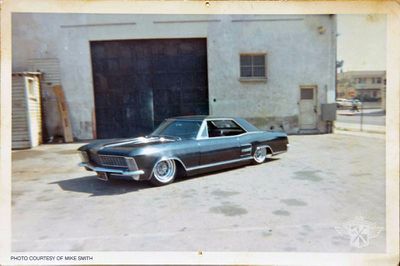 Dick Sellars Riviera outside Dick & Ron's Huntington Park shop. Dick's Riviera was shaved for handles, it had lifts all the way around and ran on Skylark wire wheels. Photo courtesy of Mike Smith, provided by Howard Gribble. 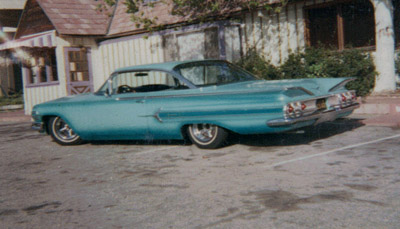 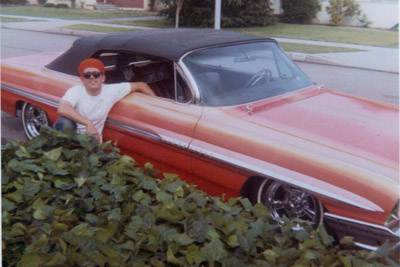 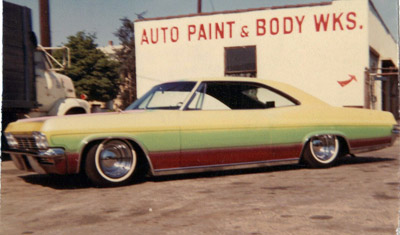 Dick & Ron's Custom was a custom body, paint and hydraulic lift shop in Huntigton Park, California. The shop was run by Ron Jones and his partner Dick Sellars. Dick and Ron were both body and fender, and paint guys, and according to Jim Arkin, who had them install lifts on his Impala in 1966 they never had a sign or a name on their building. Custom car and lowrider historian Howard Gribble, believes that Ron and Dick probably did more lifts than anyone else back in the 1960s.[1] Ron and Dick's shop was located at 6034 Rugby in Huntington Park down toward Bellflower, and according to San Fernando Valley Illusions member Mike Davis they were the first to install hydraulics. Dick and Ron met in jail, and that is were they came up with the idea of using surplus aircraft landing gear. The downfall was that the pumps were 24 volts, so they set it up with a knife-switch that would charge the 12 volt 2 groups at one time, then they were series to 24 volt. Mike remembers the first time he saw a lifted car. It was a 1959 Ford 2 door hardtop Galaxie that he spotted at Oscar's Drive In at Van Nuys Blvd. The car was champagne with a silver flake black spiderweb top, and he is pretty sure that Larry Watson was driving it. Mike drove trough the drive in with his slammed 1952 Chevrolet business coupe, and he had to 45 angle to get up the drive way. The '59 Ford sat on the ground, and Mike thought how the fuck did this guy get up the drive? He parked across the street and waited for the '59 to leave the hop. Larry came out, got his tray, and started the car. Then he raised the front so he could turn the wheels. He pulled out, dropped the front, drove the 100 ft to the driveway on the ground, stopped, raised the front, then the back, and drove away. Mike followed him to Bob's Drive In and saw him do it all over again. Mike and his friends were blown away. How the fuck did he do it? Soon they all learned who Dick & Ron were, and Mike went to their shop with another San Fernando Valley Illusions member. At the shop they were amazed by a brand new 1966 Buick Riviera with less than a 100 miles on it having the doors suicided. The Riviera was apart and in primer at the time. They could not believe what they saw! Shortly after that, 5 or 6 guys in the San Fernando Valley Illusions had hydraullics installed by Dick and Ron on their rides.[2]

Dick and Ron quit installing lifts and closed their shop in the late 1960s.[3] Late in 1968 Dick lifted Howard Gribble's 1966 Buick Riviera. by then he was working on his own. Dick was very talented all around and worked for Barris Kustoms for a while as well.[1] He moved to San Fernando Valley in the 1970s, and he ran a couple of body and custom shops in the Valley. One of the shops was located in North Hollywood, and for a while Larry Watson painted out of this shop.[3]

Please get in touch with us at mail@kustomrama.com if you have additional information or photos to share about Dick & Ron's Custom.