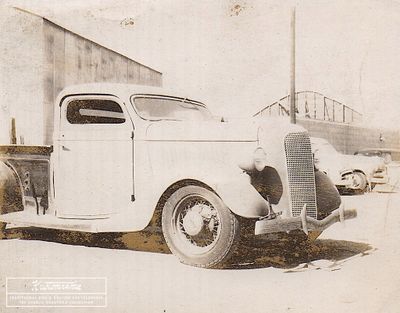 A photo of Charlie Grantham's 1935 Ford pick up taken in 1948. Charlie was Chuck's cousin. He was 10 years older than Chuck, and he was one of the people that got him interested in cars. Photo from The Charlie Grantham Photo Collection.

Chuck Edwall of San Diego, California. Chuck had a cousin, Charlie Grantham, who was 10 years older. "He is one of the people who got me interested in cars," Chuck told Sondre Kvipt of Kustomrama in April of 2020.

Chuck lived and went to high school at Mark Keppel High in Monterey Park, a suburb of Los Angeles. "Me and my cruising friends formed a small car club and we named it The Dukes," he told Sondre. "Cast plaques in my metal shop class. There were only five or six of us, and we would go as a group to all the local drive-ins and cruising spots." On Saturday and Sunday, they would go to the drag races at the local strips.[1]

In his Junior year, Chuck moved with his family to San Diego, California, where he attended Grossmont High School. "I joined the Globe Pacers car club there. As a club we built a 1939 Chevrolet coupe with a 383 cubic inch, 15 to one, Oldmobile engine, 1941 Cadillac 3-speed transmission, and a 1940 Pontiac differential with 4:10 gears." Having his 49 Olds coupe, Chuck fit right in.

Later, he joined the San Diego Roadster Club, where he in 2016 acted as secretary.

Please get in touch with us at mail@kustomrama.com if you have additional information or photos to share about Chuck Edwall.