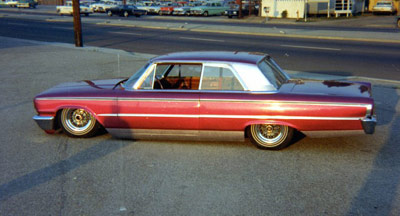 Jim Boyd's 1963 Ford of Torrance, California. Jim's Ford received lifts by Bear in the first half of 1964. He began by installing lifts up front. Later on it did also receive lifts in the rear. 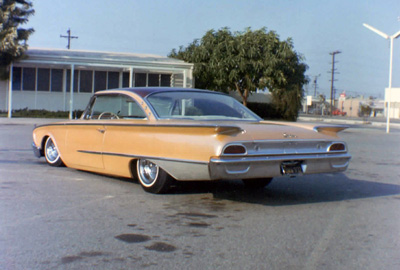 Bear of Downey, California is a pioneer when it comes to installing hydraulic lifts on cars. In 2011 Mike Perello told Kustomrama that he first saw a lifted car in 1964. He was driving with a friend to the local A&W in Torrance. About a block before A&W they passed a friends house. The friend, Jim Boyd, had just finished a full customization on a 1963 Ford, and the car was parked at the curb lying on the ground. Mike had never heard of lifts, or seen anything like it, so he asked his friend if he knew what had happened to the car. He wondered why it was broke. The friend told Mike that the car had lifts. When Mike learned about lifts, and how you could raise and lower a car from the inside with a switch, he flipped out. He had three weeks left before his license came back after a suspension, and he was really up for a set of lifts. They found out that Larry Watson knew the person who did the installation, so they took the Starliner to Watson. Larry sent the boys to Bear. At the time, Bear was in his early twenties, and he was working out of his parents house in Downey, Paramount or Lakewood, about a mile from Larry's paint shop. Mike had Bear install hydraulics up front on the Starliner in the Summer of 1964.[1] According to Dennis McKee, "everyone" went to Bear for lifts in the mid 1960s.[2]

In 2017 Keith Christensen told Kustomrama that Bear did a super backyard form of hydraulics; "There was an in between community between Downey and Paramount. There were two little communities in that tiny location, Hollydale and Clearwater, better known as Hynes. They were the stomping grounds of the Dutch and Portuguese. There is still two businesses there, one called Clearwater Lumber and Hines Truck and Wagon Scales, a big old barn that the dairymen used to pull their loads in to and weigh them. Both, to me are historical landmarks. I had a muffler shop in Hollydale, called Action Muffler. Next door, there was a little-tiny restaurant with four stables and some round bar stools that mounted to the floor on a chrome posts. It was called Berthas Grill if I remember right. No parking, just curb, sidewalk and Berthas. Her son was Penguin, who was the inseparable buddy of Bear. About like Laurel and Hardy. Whatever one did the other joined in and you can imagine hydraulics from them. I cut many of their platform parts for them. If you went into Berthas there they were at the front little table."[3]

Please get in touch with us at mail@kustomrama.com if you have additional information or photos to share about Bear.