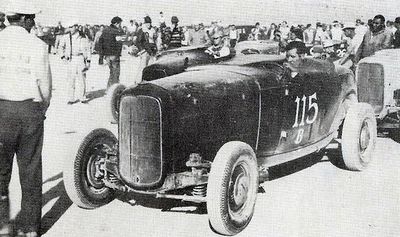 Born Akton Moeller, in Denmark, he migrated to Whittier, California with his parents as a child. As a teenager, he worked in the Nixon family store, and he recalled that a young Richard M. Nixon often asked him to bring him a candy bar and to "help yourself as well."[1]

Miller was a charter member of the Roadrunners car club, and he began his career racing on the Southern California dry lakes in the 1930s. The Roadrunners was one of the clubs that founded the Southern California Timing Association, and Miller served twice as their president. Miller was also a charter member of the National Hot Rod Association, and he served as vice president of the association with Wally Parks as the founding president.[1]

In addition, to dry lakes and drag racing, Miller also competed in the Pikes Peak Hill Climb, Baja 1000 off-road races and events in Italy and Mexico. He built a 1927 Ford Model T special on a 1950 Ford chassis for the 1953 La Carrera Pan-americana. The car was called "El Caballo de Hierro," and he drove it from his home in Whittier to Juarez for the race.[1]

Miller and a group of racing personalities were invited to the White House while Richard M. Nixon was the President. When President Nixon walked into the room he grasped Miller's hand and said "Ak, did you bring me a candy bar?"[1]

Before Miller passed away, he was elected into the Dry Lakes Hall of Fame. He was 84 years old when he passed away in 2005. There were no survivors, and there was no service. Miller told friends that he wanted his ashes scattered at the Bonneville, Pikes Peak and Baja race.[1]

Please get in touch with us at mail@kustomrama.com if you have additional information or photos to share about Ak Miller.