From Kustomrama
(Redirected from 1955 Motorama)
Jump to: navigation, search 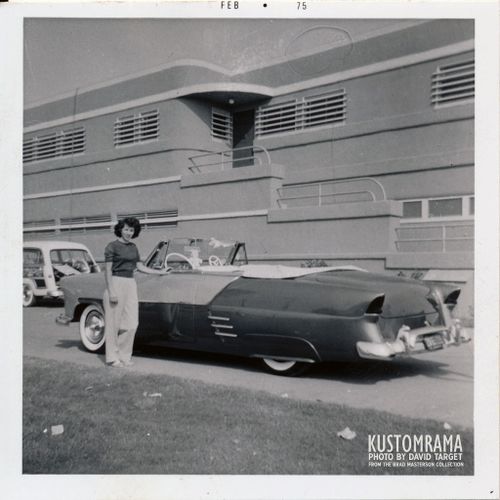 Mom's Dream Car! In the official program for the 1955 Motorama, Sam Barris' 1952 Ford convertible was listed as "Mom's Dream Car." It featured a full padded safety interior, 5 impact safety belts, a baby bottle warmer on the dash, and a diaper bag dispenser behind the front seat. Developed in 1975, this photo shows Sam's wife with the car in front of the Pan Pacific Auditorium. 15 years old David Target took the photo during his first trip to California. The Von Dutch painted Barris Kustoms' 1949 Ford Woody Wagon parts hauler can also be spotted in the photo. Photo by David Target, courtesy of Brad Masterson. 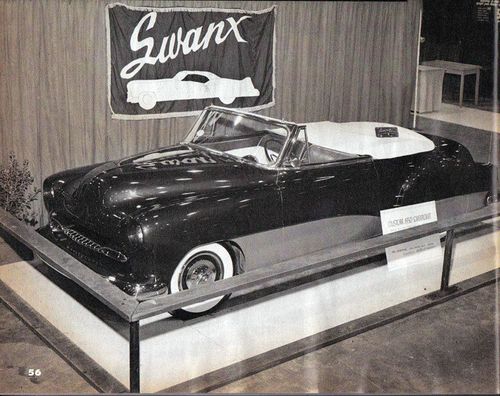 Ted Leventhal's 1950 Chevrolet Convertible at the 1955 Motorama. Ted's Chevrolet was restyled by Emory Robinson's Custom Shop in 1955. Painted in a green iridescent lacquer by Mel Pinoli's Body and Paint Shop, Ted's Chevrolet is known as the first car ever to receive a Candy paint job.

The 6th annual Motorama, now advertised as the International Motor Revue, was held October 14-23 at the Pan Pacific Auditorium in Los Angeles, California.[1]

Please get in touch with us at mail@kustomrama.com if you have additional information or photos to share about Motor Revue and Motorama 1955.