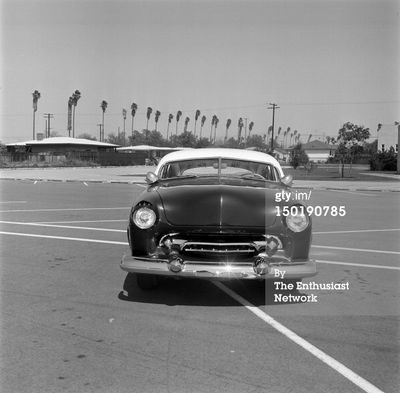 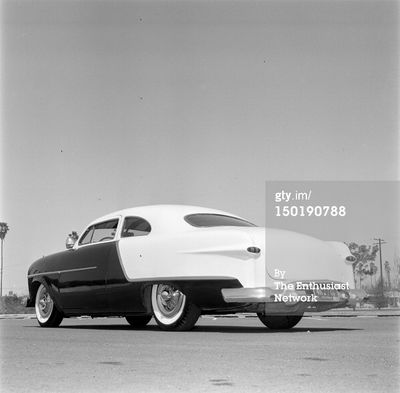 Photo by Eric Rickman, courtesy of The Enthusiat Network. 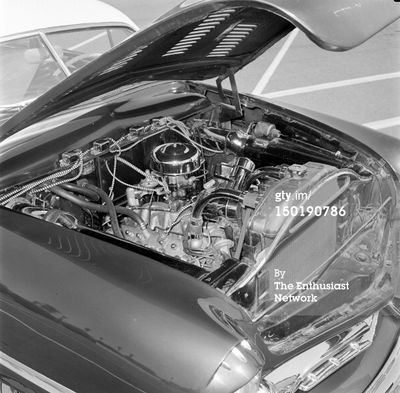 When Eric photographed the car in April of 1955, it was still powered by a flathead V8. Photo by Eric Rickman, courtesy of The Enthusiat Network. 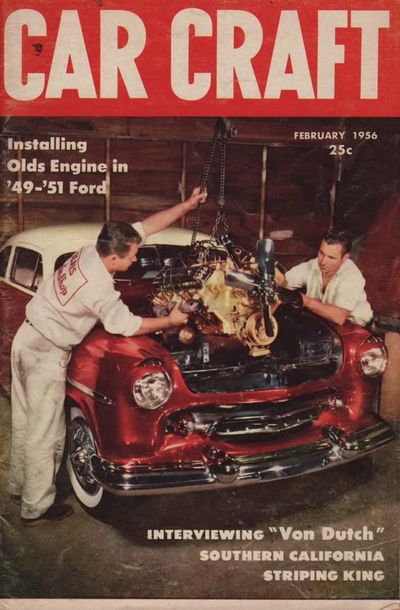 In 1956 a photo of Bob's Ford appeared on the cover of Car Craft February 1956. This photo was taken while they were installing an Olds rocket engine in the car. 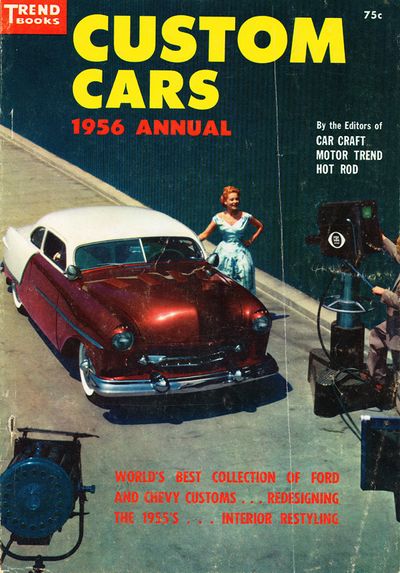 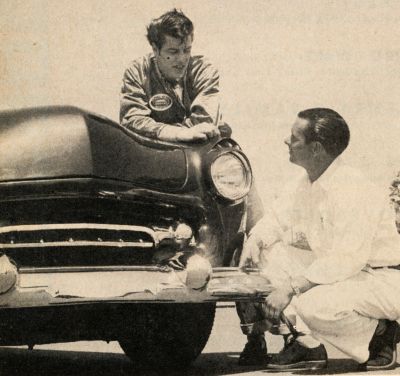 Bob Dofflow and Don Roberts in front of the Ford 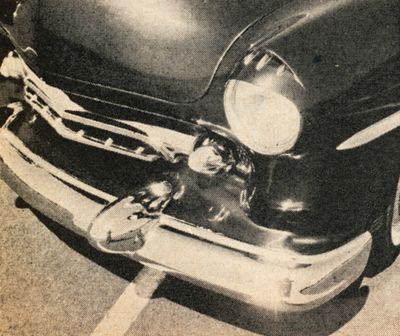 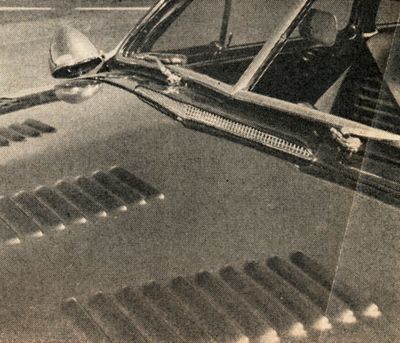 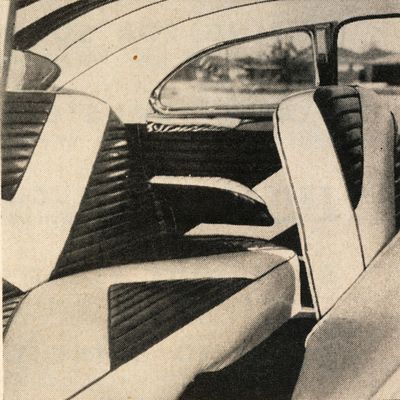 1949 Ford restyled by Don Roberts of Bear's Custom Shop for Bob Dofflow of Whittier, California. Bob and Don were neighbors and good friends, and the Ford was Bob's first custom car. The build was started in 1950, right after Bob had bought the car, and it took a year-and-a-half and $2200 to complete. At Bear's, the top on Bob's car was chopped 4 1/2 inches. The hood was shaved and louvered, and the corners were rounded. The headlights were frenched and fit with air scoops and eyelids. Small chromed teeth were installed in the air scoops above the headlights. A floating grille bar was made from a 1954 Ford grill that Don fit with 1952 Ford parking lights. 1951 Ford grille bullets were placed at the ends of the grille. A 1951 Ford bumper with 1953 Mercury guards replaced the stock front bumper. Front wheel openings from an Oldsmobile 98 were grafted onto the car. A 1954 Ford rear bumper with 1953 Kaiser guards was installed in the rear. The car was decked, and the door handles were shaved. Doors, hood and the trunk were operated electrically. The engine was dressed up with a lot of chromed parts. All the work, except for the interior was done by Don Roberts. The interior was done by Gaylord in maroon, red and white Naugahyde. The floor rugs were also done in maroon and white, and the front seat was lowered three inches. Don lowered the car by adding lowering blocks all around. After completing the bodywork, the car was painted with 20 coats of Titian Red and Alpine White lacquer. Side trim from a 1954 Oldsmobile was used to separate the two colors. Dual spotlights and accessory "wire wheel" hubcaps fit with 1951 Ford grille bullets wrapped up the re-style. This version of the car was photographed by Eric Rickman April 3, 1955. In 1956 a photo of Bob's Ford appeared on the cover of Car Craft February 1956. This photo was taken while they were installing a more powerful Olds rocket engine in the car. Later on, the car was also featured on the cover of Trend Book 122 Custom Cars 1956 Annual. Bob was 20 years old at the time.[1]

Bob sold the car in 1962. By then it had been repainted Sapphire Blue and White. According to a comment Dennis Heapy made on Rik Hoving's website, Dave Levig of Brainerd, Minnesota bought the car in the late 1960s. The car was still in California when Dave bought it. The old custom was missing its motor, so Dave flat towed it back home to Minnesota. In Minnesota the car sat and deteriorated for years before it was brought to the Nisswa City Dump in Nisswa, Minnesota. Dennis remembered the car from the little pages when he was in high school, so in 1970 when he heard about the car being dumped, he drove over to check it out. At the dump he could see the remains of the car sticking out of the junk.[2]

Please get in touch with us at mail@kustomrama.com if you have additional information or photos to share about Bob Dofflow's 1949 Ford.