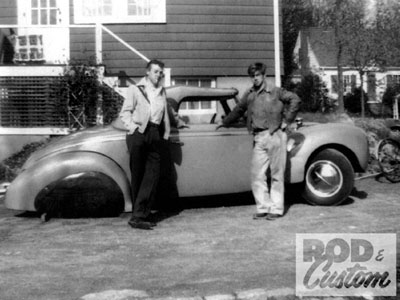 In 1952 William spotted Ralph Turnberg's 1939 Ford Convertible during a family vacation. He was 9 years old at the time, and he was really impressed by the chopped and channeled custom. In fact, it was Ralph's custom that inspired William to get into custom cars. 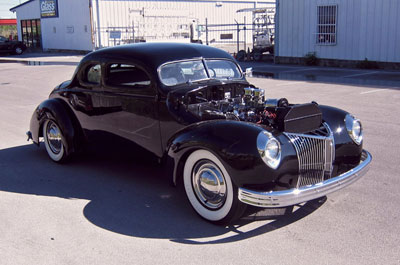 William Day of Beverly Farms, Massachusetts. Willam's dad was a paraplegic, confined to a wheelchair as the result of a sniper's bullet in Patton's Push across France following the Normany invasion. He enjoyed short car rides around the area, and in the fall of 1952 William's parents decided to try an overnight trip down to Cape Cod from their home in Cape Ann. The trip turned out to be a logistical nightmare due to the complete lack of handicapped access facilities. "I was as much into cars as I could be for a nine-year old in a very provincial part of the country. Around Beverly Farms the closest thing to a custom car was a nondescript sedan with a glasspack muffler and maybe a squirrel tail tied on the radio antenna."[1] During the trip William had his first encounter with a customized car, an experience that would change his life forever. In 2014 he wrote an article for Hotrod Hotline describing the memorable trip:

"In this time before interstates, we got as far as Brockton, a suburb of Boston, by lunchtime. The only place we found was a teenage hangout but it advertised hamburgers so we stopped. We were reading the menu and deciding on what to order when in pulled a primered 1939 Ford convertible with loud mufflers. It was chopped and channeled and didn’t have a hood, so the flathead engine with dual carburetors topped with chrome air cleaners was clearly visible. The driver got out and went into the diner. He wore bluejeans, boots, a white tee shirt and a black motorcyle jacket. A few minutes later he came back out, got into the Ford, fired it up and took off in a cacaphony of rapping pipes.[1]"

"I was way, way more than impressed. I had never ever seen anything as cool as that. Ask anyone with a hobby or special interest how they got into it, and they are usually hard pressed to provide an answer. Today, sixty years later, I still have a vivid recollection of each detail and know that brief chance encounter was the first step on my lifelong interest, or perhaps obsession is a better term, with custom cars. It took me awhile to identify the make and model of car, and even longer before I could appreciate the extent of the custom modifications. In a year end issue of Life Magazine that showed cars that had driven on Goodyear Tires, I saw a Lincoln Continental, which is essentially a sectioned and lengthened Lincoln Zephyr. It’s a custom 1939 Ford convertible on a more grandiose scale.[1]"

"Three years later, Christmas 1955, I got my first issue of Hot Rod Magazine (January 1956) and the following Christmas the Trend “Best Custom Cars of 1956” annual that featured Doug Rice’s chopped and channeled 1939 Ford coupe, the “Bonneville Boomer.” This showed me the same modifications that blew me away on the 1939 convertible at the diner in Brockton could also be made to a coupe. I was hooked for life.[1]"

In 1961 William moved to Las Cruces, New Mexico, to begin his university education at New Mexico State University. The day he arrived in town he saw a chopped and sectioned 1940 Ford convertible. He was able to buy that one six years later. William's first custom was an over-the-top full custom 1939 Ford convertible that he found in Alamogordo, New Mexico in 1962. The Alamogordo car had been chopped, channeled, sectioned, and molded. It was also fit with a genuine Carson Top. In 1971, the year he began teaching, he bought a 1940 Mercury convertible with full custom modifications. The Merc had everything except for a chopped top. It was Cobalt blue and featured a deep channel, raised and molded fenders, a sectioned hood, dual spotlights and an early Cadillac OHV-8 with a Cadillac-LaSalle floor shift tranny that was adapted to the Mercury torque tube. In 1972 he bought a chopped 1950 Mercury coupe and a chopped, channeled and sectioned 1939 Ford convertible that Neal East helped him purchase after he saw an article by Neal in Street Rod Magazine. Obsessed with the channeled and sectioned look, William also acquired several 1941 Lincoln Continentals. "I bought these cars at a time when custom interest was more on late model stuff, and long before anyone was using terms like “old school”. Consequently, the price was right and condition good for “builders.” The remarkable thing is I was able to hang on to them.[1]"

William belonged to a car club in Louisville, Kentucky named Obsolete Iron. Attending a meeting in the early 2000s he thumbed through a copy of NSRA's Street Scene magazine. In the back near the classifieds ads was an article about Blue Ridge Community College in North Carolina that had started a program in auto restoration with emphasis on classics and street rods and customs, much like the one at Wyoming Tech. The article was illustrated with two photos of a chopped and channeled 1940 Ford coupe under construction. William wrote down the phone number for future reference."A couple of years later, I was assisting my wife who directs the University of Louisville Conference on Literature and Culture since 1900. I had access to wide area telephone service and time to kill. I dialed the number and was promptly connected with Stan Ducker, the coordinator and head professor of the auto program. We spoke for a while, and I told him how much I liked the 1940 Ford coupe and wondered if it might be for sale. He replied, “Oh no, the owner is very proud of that car, he built it himself and he helps me with the courses. In fact, he is an older man, but since you are interested in cars like his, I’m sure he would enjoy speaking with you. His name is Ralph Turnberg.” As Stan was looking up Ralph’s number he continued to tell me how Ralph had been involved with cars all his life. “Yes, he said, “Ralph grew up in Massachusetts, and I am looking right now at a picture of him with a custom he had back in the day – it’s a 1939 Ford convertible with a bunch of stuff done to it.” It was at that point that a cold chill began working its way up my spine. I called the number and soon was speaking with Ralph. After the usual formalities of introduction, Ralph started telling me about his coupe. I mentioned that Stan said he grew up in Massachusetts, and I asked Ralph where. He answered, “Brockton.” My next words were, “You’re not going to believe this, but, we met quite by accident, over 50 years ago” and I recounted the chance encounter at the Brockton diner in 1952."[1]

William stayed in touch with Ralph by email. He finally met him and his wife Nay Ann several years later at the NSTA Nationals in Louisville. They were driving the 1940 Ford coupe.[1]

Please get in touch with us at mail@kustomrama.com if you have additional information or photos to share about William Day.