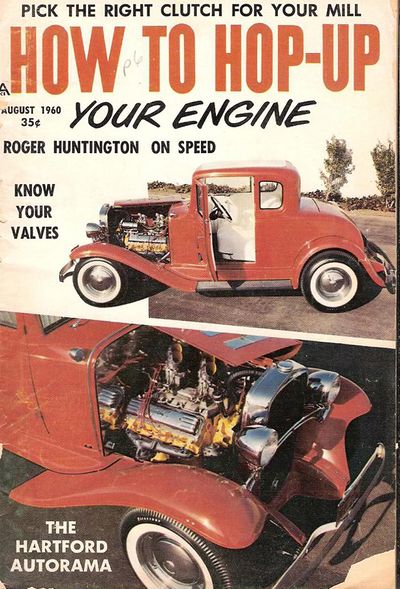 Shortly after the build was completed, Vince's coupe landed the cover of How To Hop-Up Your Engine August 1960. 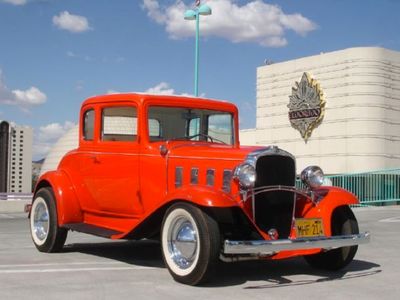 The coupe as it looked in 2008 when it was advertised for sale by Silver Auctions. 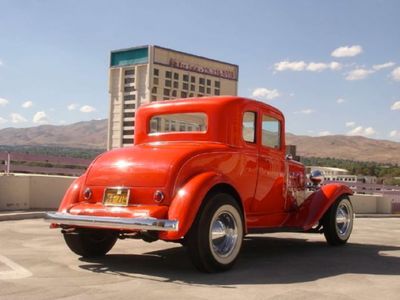 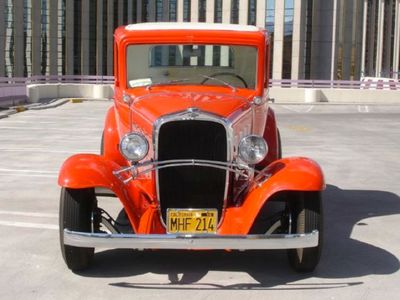 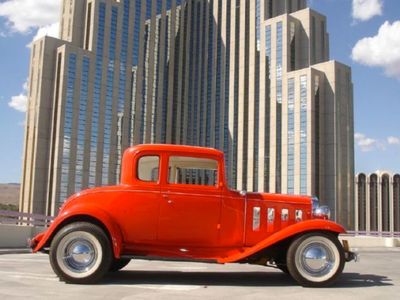 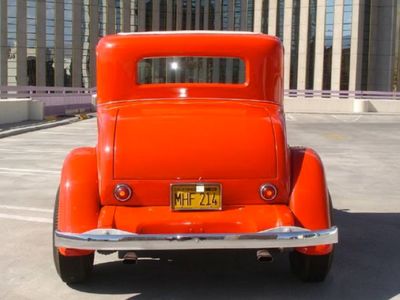 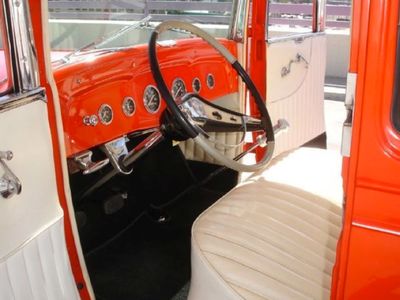 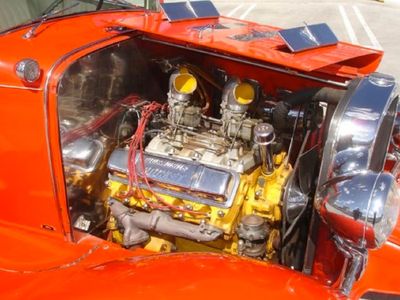 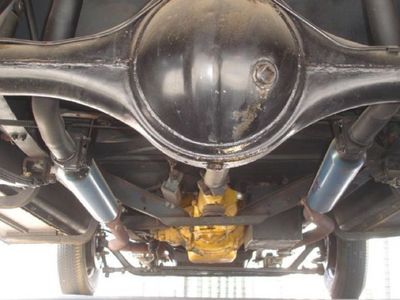 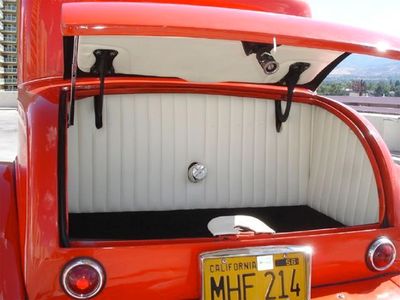 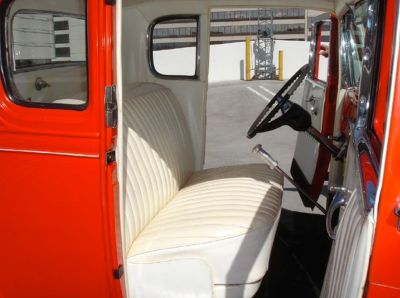 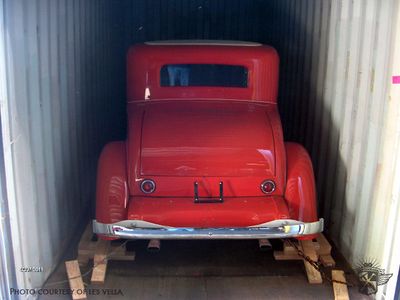 Vince's old coupe loaded into the container in February of 2011, ready to be shipped over seas to Australia and its new owner Les Vella. Photo courtesy of Les Vella. 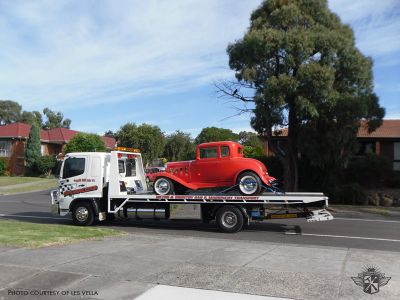 April 1, 2011 the coupe was delivered at Les' house. Photo courtesy of Les Vella. 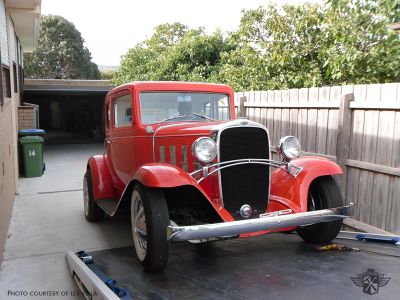 Les' rolling the coupe of the trailer. Photo courtesy of Les Vella. 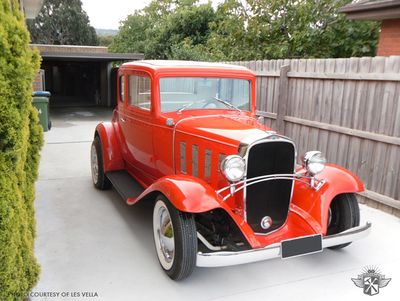 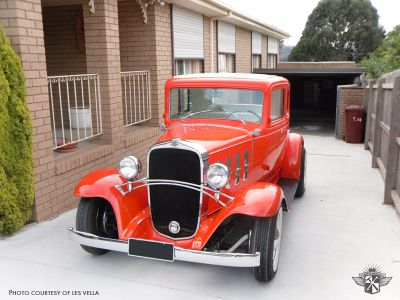 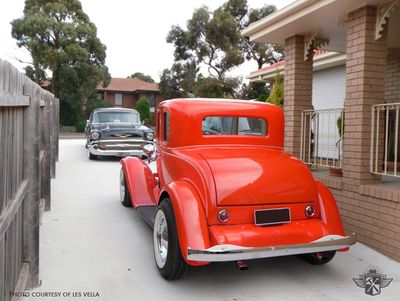 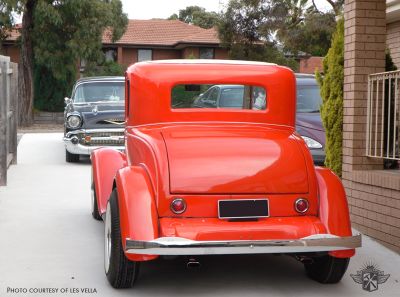 1932 Chevrolet Coupe owned and built by Vince Palozzoto of Hayward, California. Vince's father in law, Johnny Neves, was the foreman at the local Chevrolet assembly plant, and owner of a cute little 1925 Chevrolet coupe with a Mercury engine, so when Vince decided to build a hopped up coupe himself, he decided to do as his father in law. In 1953, after a three year search, Vince located the coupe in Castro Valley, California.[1] It lacked an engine, and the body was very rough, so Vince got it for $50.00. Vince and Johnny set off to straighten the body on the coupe in 1953, dinging it out applying fiberglass. A 1952 Oldsmobile 303 ci. engine engine was pulled out of a wrecker and fixed up for the coupe. It was punched to 3-15/16" and fitted with a Potvin cam, milled heads, Mallory ignition and an Offenhauser four pots intake fitted with Stromberg 97 carbs. The engine was given a coat of chrome yellow paint and dressed up with chromed parts. Before the engine was installed between the old framerails, the firewall was moved back about three inches and replaced with a stainless steel counterpart. The original transmission and rear end were dumped in favor of 1937 LaSalle parts. During the rebuild, the driveshaft had to be shortened to 18 inches, and the spring hangers had to be repositioned. Up front a 3 inches dropped axle with 1938 Chevrolet spindles and backing plates were installed. The front brakes were 1950 Pontiac. The steering box came from a 1937 Ford. Buick wheels fitted with 8.20 tires were installed in the rear. Up front Vince installed a set of Henry J rims that sported 6.40 Firestone tires. 1950 Pontiac taillights replaced the stock taillights, and the body was painted in a bright red. Inside, the stock dash was fitted with Stewart Warner gauges, including a tachometer. All seams were molded, and almost anything that could come off was sent to the chrome shop. The interior and trunk was upholstered in white rolled and pleated Naugahyde by Joe Repitie of Hayward.[2] Being a family man, the build wasn't completed until 1960. Once completed, Vince's coupe landed the cover of How To Hop-Up Your Engine August 1960. According to that story, the coupe wasn't used daily. Later on the same year, Vince entered the coupe at the 1960 Oakland Roadster Show where it won an award. It was also shown at the 1962 Sacramento Autorama where it won another award. Later on the same year, it was put in storage in Vince's grandmothers' garage for 25 years. After that it spent another 25 years in Vince's garage in Oakley, California. After owning the car for 53 years, Vince and his wife Sally sold the old coupe in 2006.[1]

In 2008 the coupe was sold at Silver Auctions. By then it hadn't been registered since 1962. In December of 2009 it was advertised for sale on eBay. The auction ended at $19,001.01, and the reserve was not met. In October of 2010 the coupe was listed for sale on eBay again. By then it was located at a car yard in Reno, Nevada. Les Vella of Australia stumbled across the eBay listing looking for photos of cars on eBay. He liked what he saw, and after considering the car for a couple of days he rang the yard. A deal was struck, and Les had become the lucky owner of an old historic hot rod. Due to strict laws importing cars into Australia, Les had to wait for approval before he could have the car shipped. After 2 months of waiting, Les finally got his approval in January of 2011. A month later it was loaded into a container and shipped over seas. When the coupe arrived in Melbourne in March of 2011 it looked exactly as it did when Vince parked it in 1962. It still rolled on its original 1959 tires, but the carpet on the interior had been replaced because of a hole made from battery acid. There had also been minor paint touch ups on the body. 1st of April, 2011 the coupe was delivered at Les' house. It didn't take Les long time before he had fired it up. He intends to leave the car the way it was originally built with the exception of removing the fuel tank from the trunk and back into its original position so he can fit the wheelchair for his wife in the trunk. He also had to replace the original tires as they were pretty cracked up. New front tires similar to the originals were installed up front. The rear tires were no longer available with the thin white wall, so he had to get larger white walls for the rear. Les did also redo all the brakes and wheel bearings. He re conditioned the master cylinder and changed all of the hoses as well.[3]

Please get in touch with us at mail@kustomrama.com if you have additional information or photos to share about Vince Palozzoto's 1932 Chevrolet.