This old photo was taken by Gene Winfield in the parking lot at a car event somewhere in Northern California. The car is believed to be the roadster as it appeared when Max Ferris owned it.[1] 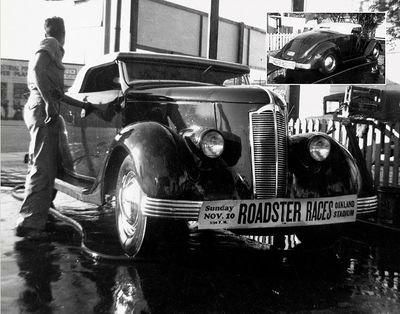 Gene Winfield snapped this photo at an Associated Gas Station. The car in the photo is believed to be the roadster as it appeared while Larry Chubbick owned it.[2] 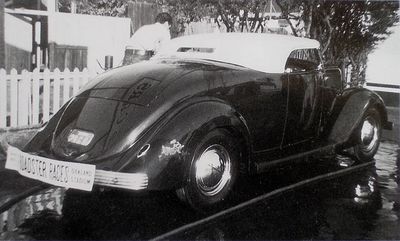 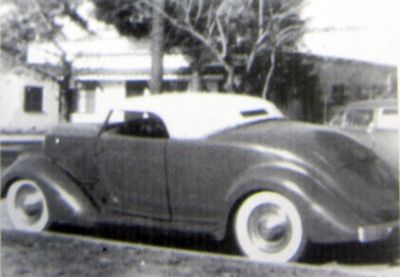 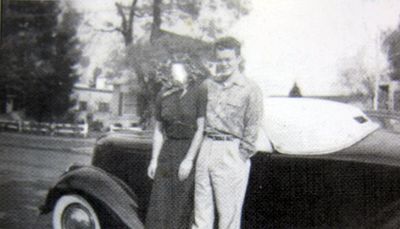 Vern and his ex-girlfriend, his present wife scratched her face away in this photo.[3] 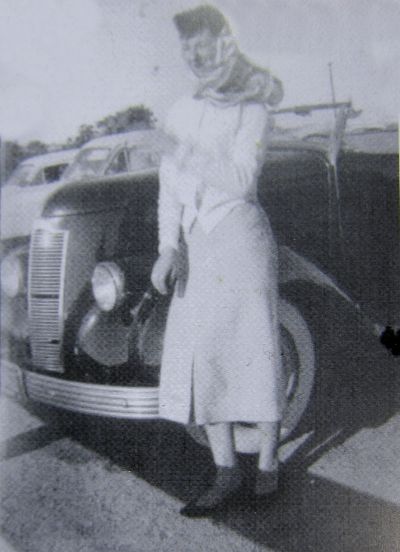 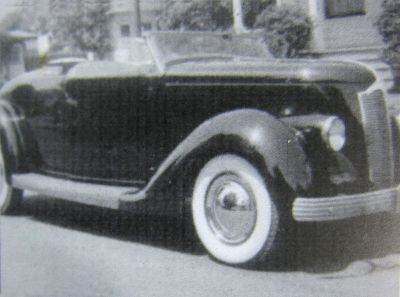 Vern's roadster at the 1952 Bonneville Speedweek.[4] 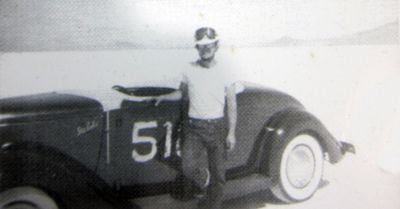 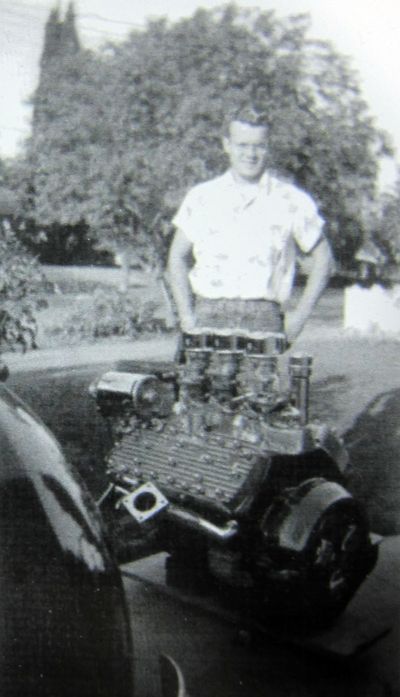 Vern and the freshly rebuilt flathead. 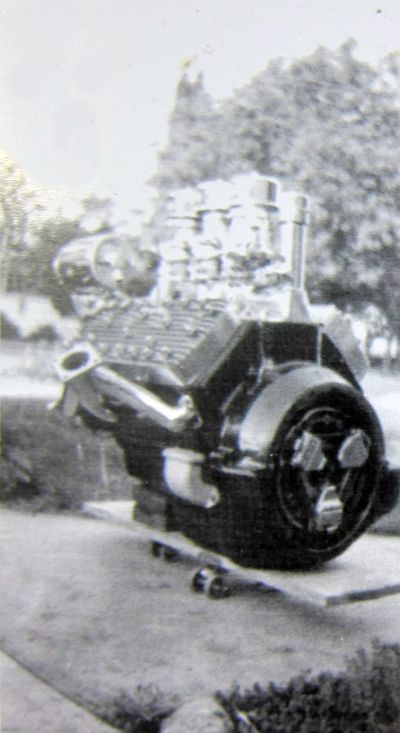 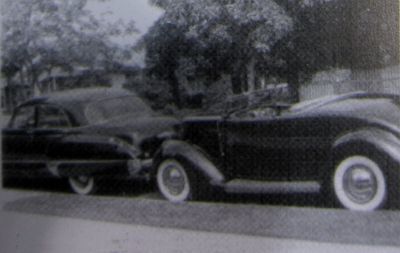 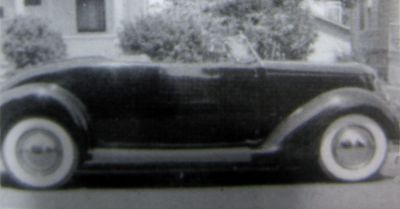 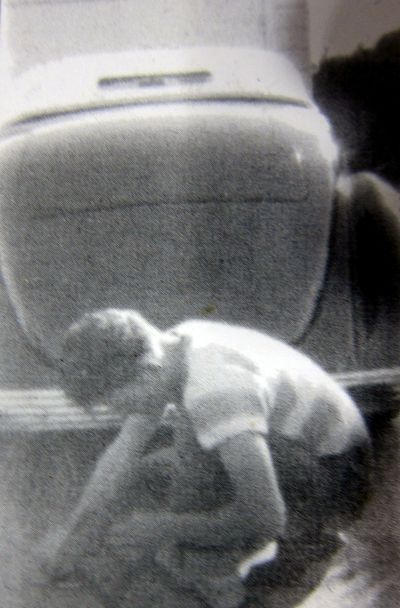 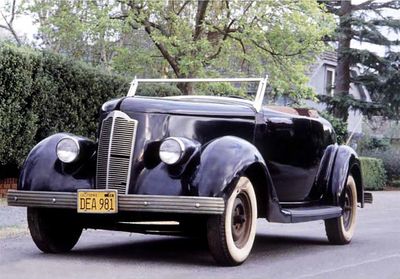 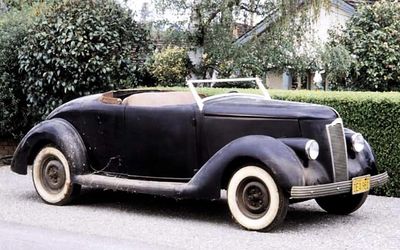 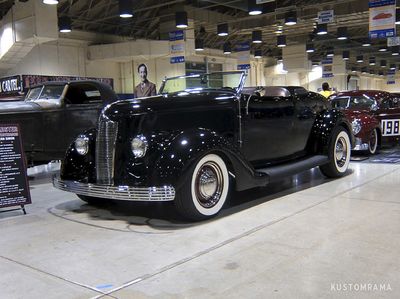 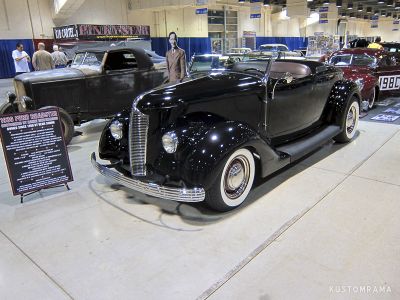 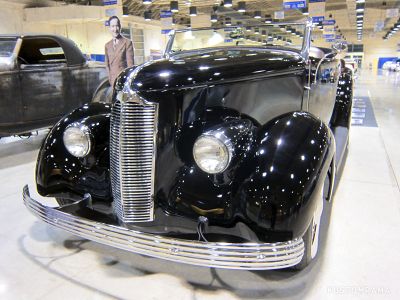 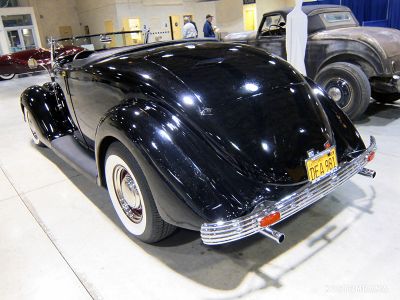 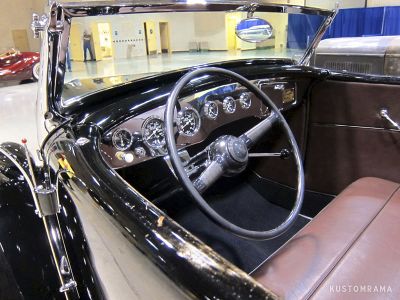 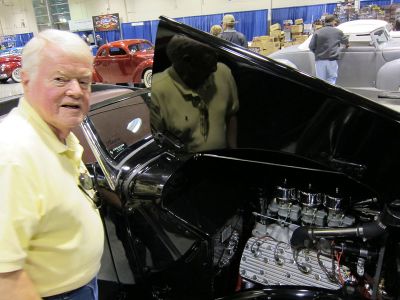 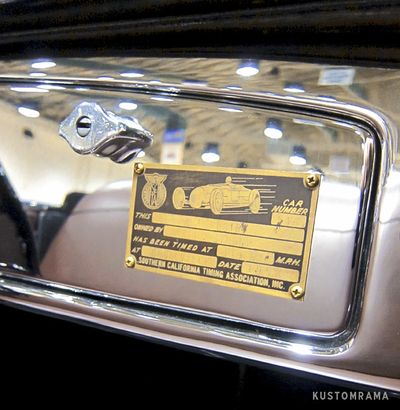 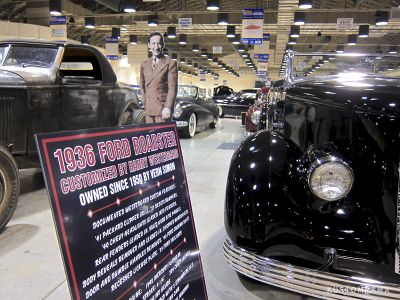 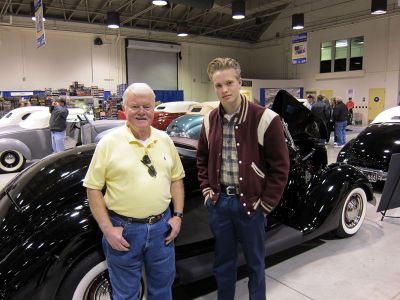 1936 Ford roadster originally owned by Max Ferris of Redwood City, California. Max sold the car to Larry Chubbick around 1946. When Larry got the car the windshield had been heavily chopped and the car had been fit it with a canvas top with drop-in side windows. A 1941 Packard Clipper grille had been installed and 1939 Buick headlights and buckets were molded in. The nosepiece was molded to the front fenders and attached as one unit. Solid hood sides had been installed, the rear fenders were molded to the body and the body had been smoothed by eliminating the beltline and shaving the door and rumble seat handles. Ripple 1937 DeSoto bumpers and smooth full wheel covers were installed along with a 1941 Mercury gauge cluster. The restyling was supposedly done by Harry Westergard, but this has not yet been proven or documented. The northern California location is consisten, and the workmanship and execution has lead people to believe that the car was originally restyled by Westergard. When Larry got the car he had the dash chromed, the taillights in the rear fenders filled in and 1941 Chevrolet taillights inset into the DeSoto bumper. The car was repainted and hopped up by installing some Edelbrock speed equipment goodies and a Columbia 2-Speed rear. The roadster was Larry's daily driver and he drove everywhere with the car. In the spring of 1949 Larry wanted to buy a newer Buick Roadmaster and traded in the car at a used car dealership. Vernon "Vern" Simon spotted the car at the dealership and bought it in the summer of 1949. He traded his 1936 Ford Phaeton plus cash for the car. As Larry, Vern also used the car as his daily driver. When he got the car it was already an "old" custom and Vern hated the color and finish. When Vern got the car it was painted Cinnabar Red and it had been fit with an upholstery stitched by Dick and Dale's Auto Upholstery of Redwood City, California. The car had been repainted three times. The original color was tan and it had been repainted in maroon, forest green, and Cinnabar Red. Vern stripped the body of its paint, but needed professional assistance to re-manicure the extensive leadwork. Lyle Bartels, an old craftsman from the San Francisco Bay area was commissioned to restore the leadwork around the Packard grille. Once the bodywork was done, Lyle painted the car black. The painted headlight rings were chromed and the top was redone and padded by Hall Upholstery. From 1949 to 1954 the Ford served as Vern's only mode of transportation.[4]

In 1952, Vern and his friend Elden Lange took their roadsters to the Bonneville Nationals. Before the long haul over the mountains, Vern bought and borrowed anything that would help his car perform better on the salt. Weiand heads, Belond headers, Jahns pistons, Johnson adjustable lifters and a new Harman & Collins .411 lift cam were acquired. A Navarro three-carb intake manifold with Stromberg 97's were borrowed from his brother in law and installed on top of a new 1948 Ford 59-AB block with an eighth-inch stroked Mercury crankshaft. By putting a Sta-Lube decal on the cowl, Vern received a free case of motor oil from the event sponsor. Switching from gas to fuel carbs, Vern and Elden began playing with an alcohol and nitro mixture. They started with a 30% nitro mix, but then began upping the ante. It all ended with a a top speed of 119.52 mph and a melted hole in a piston. The top speed was good enough for the car to take second place in its class. Barney Navarro helped Vern weld up the aluminum piston so the car would take Vern back home again.[4]

The welded up piston held good, and was actually left to stay for another year or so. After Bonneville Vern was hooked on speed, and took his roadster to different organized races in San Jose, San Carlos and Lodi. After disintegrating two Columbia rears at the drag strip, Vern installed a stock Ford banjo rear, but retained the mechanical brakes. With the new rear in place, Vern posted his best time of 14.4 at 93 mph in the quarter mile. In 1956 Vern pulled the engine out of the roadster in order to freshen it up. At the same time he got married and established a printing business. The roadster ended up in a rented garage as Vern used the garage at his then new Los Altos home as location for his blooming printing business. In 1961 the printing business moved out of the garage and Vern could finally bring the roadster home. Vern had every intent of refurbishing the roadster and the car was supposed to be a father and son project. As Vern's son Scott's interests turned towards motorcycles instead of cars, the duo never came around to work on the car. And the old custom sat almost untouched in Vern's garage for nearly 41 years. In 2002 The Rodders Journal ran a story named "Missing..." in The Rodders Journal 14. The "Missing..." story solicited that a verifiable present day photo of any of the unaccounted for vehicles featured in the story would be awarded with a TRJ bomber jacket. One of the cars shown in the story was Gene Garret's 1936 Ford convertible. The caption below the photo asked if there were any Westergard '36 Fords still out there. Ray Longanecker and old friend of Vern's saw the story and told Vern to send a photo of his "missing" Westergard '36. After several rounds of encouragement from his friends and a brief discussion with TRJ editor Pat Ganahl Vern finally sent a letter to TRJ staff. This lead to a featured story in The Rodders Journal 19 revealing this long "lost" kustom. The car had been used for storage, for many years, and not much had changed since it was first parked. The windshield was taken off and stored. The old seats were dry and cracked, and the remains of the Hall top had been taken to the dump years ago. Since the engine hadn't found its way back into the car, the car was rolled out for a notable photoshoot.[4]

In January 2011 Vern's roadster was exhibited at the Customs Then and Now historical gathering at the 2011 Grand National Roadster Show in Pomona, California.

Please get in touch with us at mail@kustomrama.com if you have additional information or photos to share about Vern Simon's 1936 Ford.