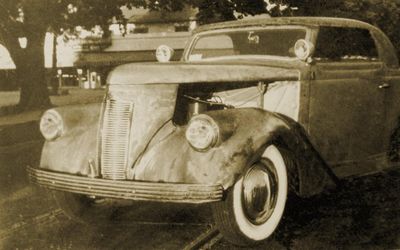 Progress photo, notice the door lines are not filled in 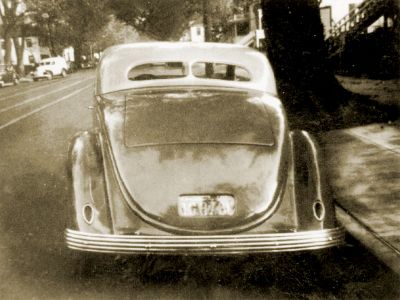 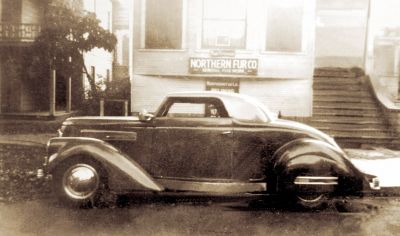 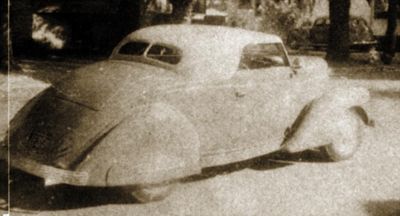 1936 Ford restyled by Harry Westergard for fellow Thunderbolts club member Gene Garret. Harry started building the car in 1943, by the time Gene was only 17 years old. According to his daughter, he worked from the time he could sell newspapers on an Oakland street corner. Often he worked 2 jobs, for all of his working life.[1] When Gene first got the car, the running boards were removed and and a new body panel was installed to cover the frame below the body. The front fenders weere extended at the bottom where the running board used to be as well. Harry restyled the car with a 1941 or 1942 Packard grille, giving the car a new appearance. The headlights were molded onto the top portion of the fenders and a set of 1937 DeSoto ripple bumpers were installed. Harry filled in the character lines in the door above the belt line. The windshield was chopped and a new remoable steel top with dual rear windows was made from 1937 or 1939 Pontiac parts. Dual Appleton spotlights, fender skirts with upside down Buick trim and ripple bar hubcaps were added. Harry also intalled vents from a 1934 Pontiac in the hood sides. The deck lid was shaved, however the door handles were retained. The license plate was recessed and a set of 1939 Ford taillights were installed.[2]

When Gene was drafted in WWII, the car was in primer. Gene sent checks to Harry while he was in bootcamp to finish the car. Harry painted the car in two shades of green: medium green for the body and light green for the top. The Gene was sent to Guam, so he decided to also have the car shipped there. Soon afterward Butler Rugard, a fellow club member from the Thunderbolts offered Gene $ 1500, Gene could not refuse the offer and sold the car. Gene only had the joy of riding his finished custom a couple of days before he was shipped to Guam. Butler kept the car for a while, but decided to sell it off. The whereabouts of this car are unknown today.[3]

Please get in touch with us at mail@kustomrama.com if you have additional information or photos to share about Gene Garret's 1936 Ford.