From Kustomrama
(Redirected from Throttle Throbbers)
Jump to: navigation, search 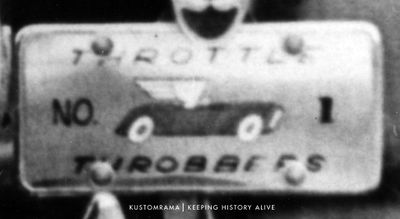 A cropped photo of Glen Wall's Throttle Throbbers plaque from 1937. Photo from The Glen and Forey Wall Photo Collection. 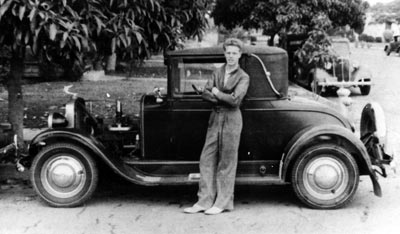 Glen Wall's 1928 Chevrolet Coupe of Huntington Park, California. Glen was a member of the Throttle Throbbers car club, and he owned the coupe in 1937. Photo from The Glen and Forey Wall Photo Collection. 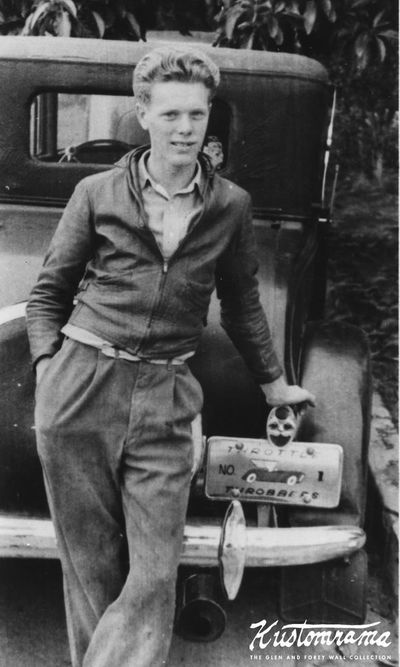 A photo of Glen with his 1928 Chevrolet Coupe in 1937. Glen and Forey had friends that were members of 100 mph clubs. The brothers didn’t have anything that went that fast, so they started their own club, the Throttle Throbbers. Photo from The Glen and Forey Wall Photo Collection. 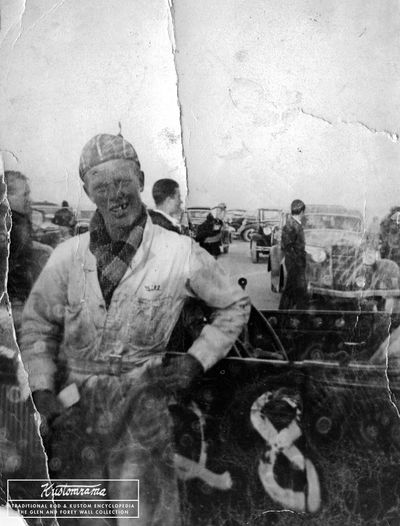 A photo of Glen Wall with Nick and Forey’s 1928 Ford Model A Roadster at Muroc Dry Lake May 15, 1938. Floyd “Scavidi” Page drove 92.7 mph with the roadster that day. Unfortunately, he broke the timing gears going through the trap. Still today Forey believes Scavidi would have gone 100 something if the timing gears hadn’t broken! Photo from The Glen and Forey Wall Photo Collection.

The Throttle Throbbers is a Southern California car club started by the two brothers Glen and Forey Wall around 1935 - 1936. Glen and Forey had friends that were members of 100 mph clubs. The brothers didn’t have anything that went that fast, so they decided to start their own club. “We were just a bunch of kids. Somewhere between 5 and 10 members,” Forey told Sondre Kvipt of Kustomrama in 2016. “Any kid that had a car and could keep it clean got into the club.”[1]

Around 1938 Forey and Nick Pastor bought a 1928 Ford Model A roadster together for 25 dollars. “We started messing around with it, and found out that it had a Winfield head, a Winfield downdraft carburetor, a camshaft and everything,” Forey remembered. “It also had an overdrive transmission,” Glen added. Glen wanted to try the car at the dry lakes, so he took it up to Muroc with Floyd “Scavidi” Page in 1938. Scavidi, who was also a member of the Throttle Throbbers, drove the car on Muroc May 15, 1938. “He drove 92.7 mph and broke the timing gears going through the trap.” Forey believes Scavidi would have gone 100 something if the timing gears hadn’t broke![1]

Please get in touch with us at mail@kustomrama.com if you have additional information or photos to share about The Throttle Throbbers.