From Kustomrama
(Redirected from The Moon Rocket)
Jump to: navigation, search 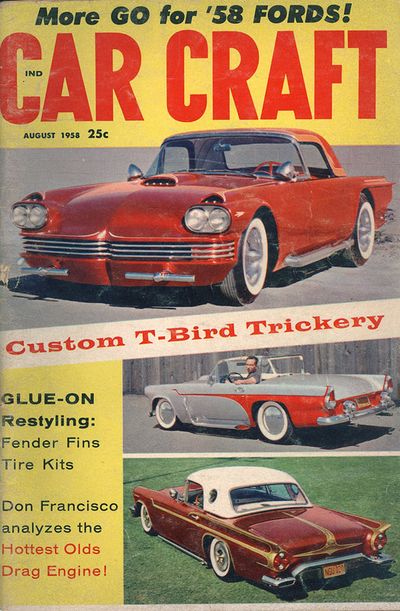 An early version of Jerry's Thunderbird was featured on the cover of Car Craft August 1958. 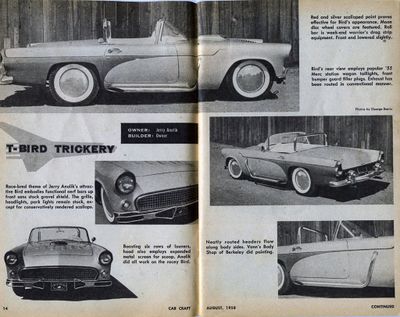 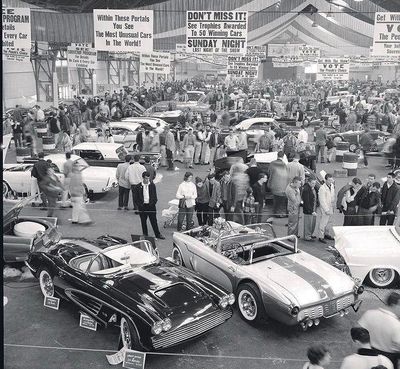 A photo of the Moon Rocket version of Jerry's Ford at the 1959 National Roadster Show in Oakland. 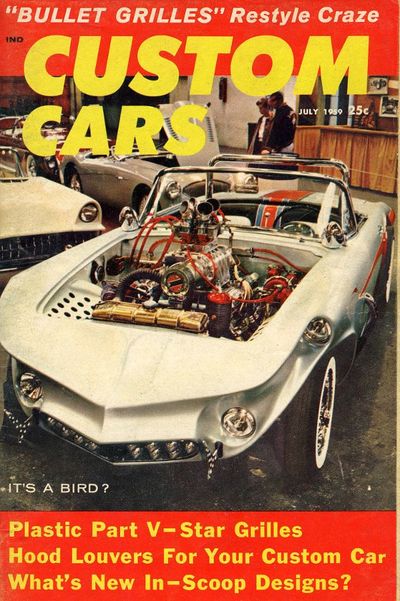 A photo of the Moon Rocket from the 1959 National Roadster Show was featured on the cover of Custom Cars July 1959. 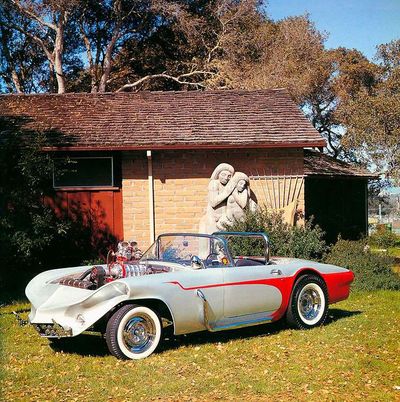 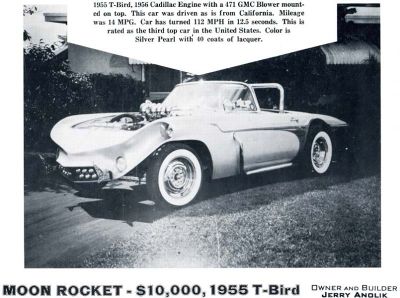 A for sale flyer that Jerry made. Photo courtesy of Custom Rodder. 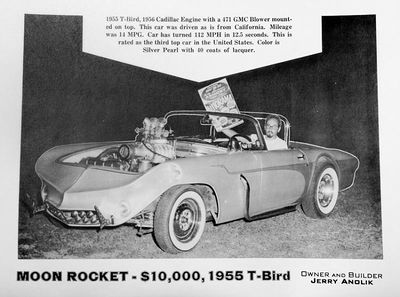 Another for sale flyer that Jerry made. Photo courtesy of Custom Rodder. 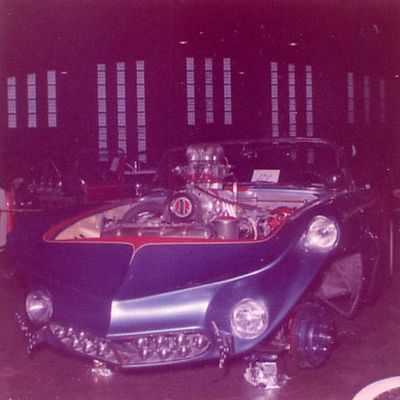 Photo from the Anthony White Collection 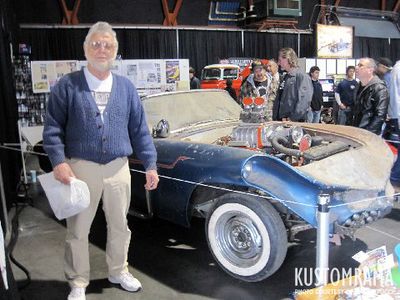 In 2010 Jerry Anolik dug the Moon Rocket out of storage to show it at the Sacramento Autorama. Photo courtesy of Ray De Pucci. 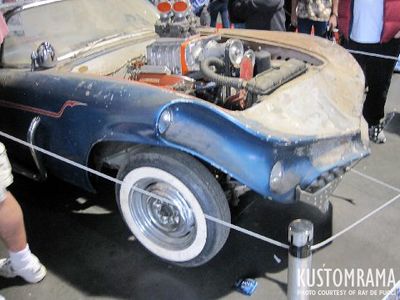 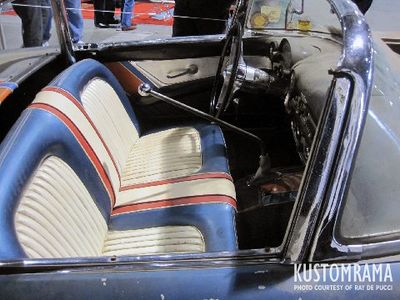 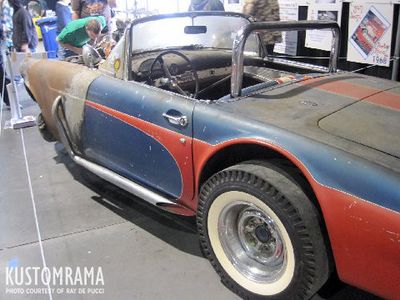 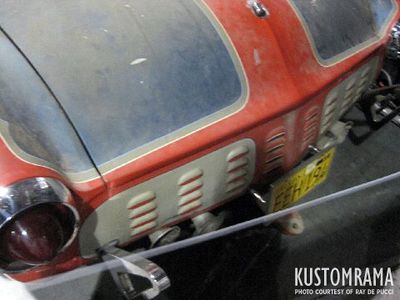 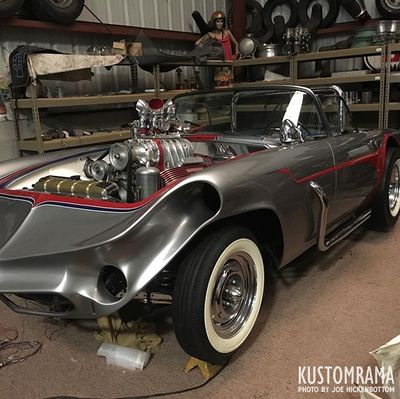 The Moon Rocket as it sat in March of 2017. Photo courtesy of Joe Hickenbottom. 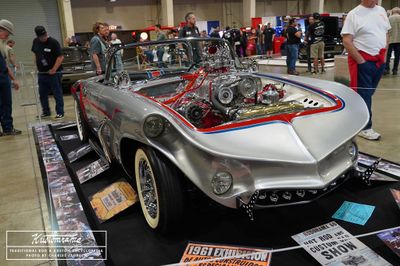 Hickenbottom debuted the restored iteration of the Moon Rocket at the 2020 Grand National Roadster Show in Pomona. Photo courtesy of Charles LaGreca. 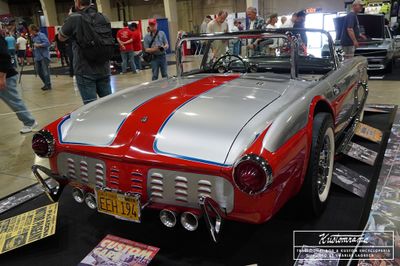 From 1954 to 1957 the Thunderbird was Jerry's daily driver. In addition to daily transportation, the car driven on the drag strip, and it was displayed at shows.

May 29 - June 2, 1957, Jerry's Thunderbird was shown at the first annual Napa Valley Rod and Custom Show. Jerry's Ford was entered in the Sports Car class. By then the car had been fit with custom nerf bars and a roll bar, giving the car a race-bred theme. The hood boasted six rows of louvers, the air scoop had been extended, and it employed an expanded metal screen for scoop.[1] In March of 2017 he told Kustomrama that the Moon Rocket was the first car he ever built. The work was done in his mothers garage.[2]

An early version of Jerry's Thunderbird was featured in Car Craft August 1958. At the time it featured 1955 Mercury station wagon taillights and headers that flowed along the body sides. Jerry did all the work on the car himself, except for the paint. The red and silver scallop paint job was done by Gordon Vann's Body Shop. The front end was lowered slightly, and it ran Moon disc wheel covers.

In 1957 Jerry showed the Thunderbird at the Lodi Roadster Show. He won 1st prize at the show. On the way back home a huge truck crossed the line at Highway 101 and hit Jerry's car head on. Miraculously, no one was hurt, but the mild custom was smashed beyond recognition.[3]

After the collision Jerry built the Thunderbird into the "Moon Rocket." In order to fit slicks on the car, Jerry had to radius the rear wheel wells. Electrical conduit was used to form the wheel wells openings. Jerry wanted them to match the tires, so he formed them around a huge barrel until they obtained the perfect shape.[2]

The Moon Rocket version of the car featured a 1956 Cadillac Eldorado engine with a 471 GMC Blower mounted on top. Mileage was 14 mpg, and the car turned 112 mph in 12.5 seconds. It was painted Silver Pearl with 40 coats of lacquer, and it featured red scallops.

Between 1957 and 1961 Jerry drove the Moon Rocket across the country to display it at several indoor car shows.[5]

The finale for the Moon Rocket's coast to coast tour was Jerry's invitation by a car show promoter to host a unique show in Puerto Rico.[5]

When Jerry returned to the US, he decided to drive the Thunderbird back to the West Coast. Along the way he decided to drag race the car. He also tested the car on the Bonneville Salt Flats.[5]

Back home Jerry decided to put the car in storage. He built a "bird cage" from 2 by 6 flooring on post and peirs so the car was kept off the ground, so that the cage would breath and not damage the car.[5]

Advertised for Sale on Craigslist

In 2009 Jerry advertised the old custom for sale on Craigslist.

In 2010 Jerry Anolik dug the Moon Rocket out of storage to show it at the Sacramento Autorama.[6]

In 2016 the car was owned Joe Hickenbottom, who was working on a restoration of the car. The restoration was completed in time for the 2020 Grand National Roadster Show, where it made its first public appearance.[7]

Please get in touch with us at mail@kustomrama.com if you have additional information or photos to share about Jerry Anolik's 1955 Ford.