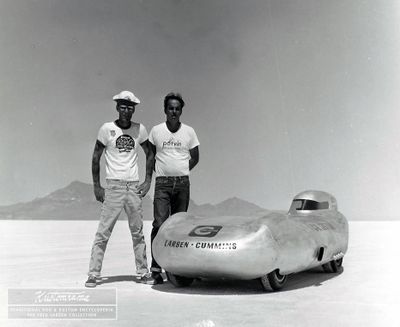 Fred and Don with the Streamliner in 1966. Photo from The Fred Larsen Photo Collection.

Fred Larsen teamed up with Don Cummins to build his first from-the-ground-up race car, using the classic slingshot, front-engine design. Lynn Yakel designed the body, applying principles of aerodynamic aeroplane design. Don and Fred built the chassis and the motors. The genius of the chassis design was that it could have been run on the salt without the body. Everything was tucked inside. Two engines were built for the roadster, one for the D class, and one for the E class. The engine size could not be any larger than 183 ci to compete in D class, and 120 ci for the E class. A 1959 Chevrolet 265 block with a 5/8-inch destroked crank was used to create the 183 ci V-8. It ran heads from a 283-inch Chevy and 4-71 GMC Blower. The estimated horsepower was 450. For the second motor Fred wanted 120 inches. "After building the 180, I knew I couldn’t get a Chevy that small and still get valves in it, so I built a 240 and left half the pistons out. I staggered them; every other one in the firing order was left out—two center pistons on one side and two outer pistons on the other. The Potvin blower hung right on the front of the crank. That gave me my 120 inches," Fred told Dick Martin.[1]

Don and Fred took the Streamliner to Bonneville in 1966. It ran a two-way average of 255 mph. One of the international records Fred and Don were aiming for was the 248-mph Class D record set by Rudolph Caracciola in a supercharged Mercedes Grand Prix car in 1939. They set eight F.I.A. records in 1967 with a best of 275 mph, shattering Caracciola’s 28-year-old mark. The Larsen & Cummins Streamliner became the world’s fastest 3L car holding the one-mile F.I.A. record of 310.26 mph.[1]

Fred campaigned the car himself for a couple of years. Shige Suganuma, who was selling Moon's Speed Equipment in Japan approached Fred about sponsoring the streamliner. Later on, Shige bought the entire company, and he asked Fred to come back to work for him.[1]

Please get in touch with us at mail@kustomrama.com if you have additional information or photos to share about The Larsen & Cummins Streamliner.